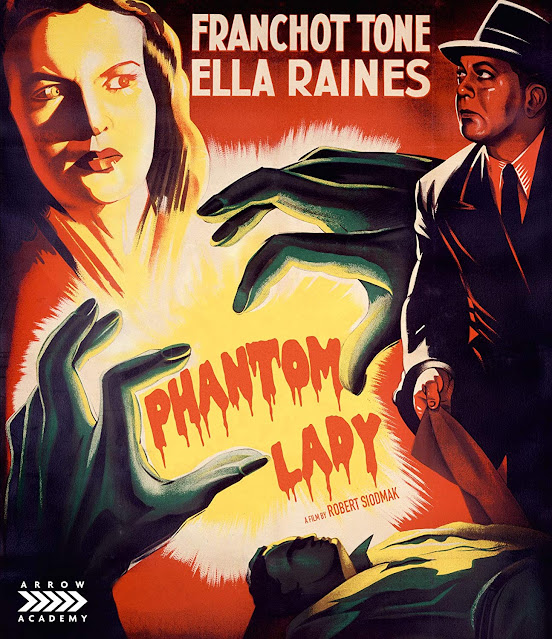 Watched:  05/22/2021
Format:  BluRay (Arrow)
Viewing:  Second
Decade:  1940's
Director:  Robert Siodmak
Producer:  Joan Harrison
I enjoyed this movie a lot the first time, but *really* liked it on a second viewing.
I just picked up the book Phantom Lady:  Hollywood Producer Joan Harrison, the Woman Behind Hitchcock - and as I finished chapter 1, figured I might as well re-watch another of Harrison's movies.
The "phantom lady" of the title does not refer to my Canadian girlfriend I swear I had in high school.  Instead - the film follows a man who has hit a sour spot with his wife and is out on the town having a drink, when he meets a woman who is, herself, distraught, but doesn't want to talk about it.  Agreeing not to share names, the two spend an evening on the town (there's no romance, just companionship), but when he arrives home, his wife is dead and the cops are waiting for him.
No, I don't know how the cops knew to be there.
The man admits he and his wife were quarreling, and when the man can't turn up "the phantom lady", he's off to jail and a swift trial.
His secretary, Ella Raines, isn't buying it and starts up her own investigation, with the support of cop Thomas Gomez and her boss's best pal, Franchot Tone, just returned from Brazil.
The movie looks great with classic noir high-contrast lighting, but also some interesting ideas in set design (Tone's apartment) and framing (the famed "erotic" drumming sequence).  I don't particularly want to list every scene and how and why it works, but the thread pulling everything together is Ella Raines' "Kansas", the intrepid secretary who won't let injustice lie, at threat to her life and limb - but she's also smarter than the average bear.
She's no Marlowe - she's operating out of loyalty and a long-hidden love for her employer, not as a professional detective with a sense of duty.  But that makes her interest and drive all the more buyable.  And I think Ella Raines - whose career was curiously short for someone who was starring in good films - is pretty terrific here, playing some challenging stuff.
Anyhoo - glad to watch it again.
Posted by The League at 5/24/2021 11:29:00 PM