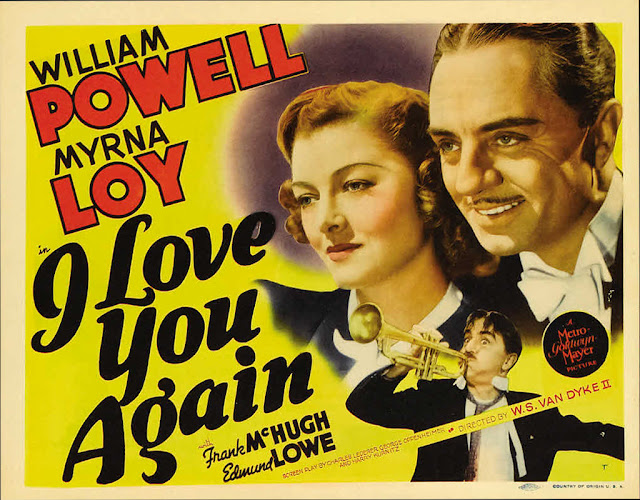 Watched:  08/30/2022
Format:  TCM
Viewing:  First?
Director:  W.S. Van Dyke
It's possible I've seen this movie before and simply don't recall watching it.  I believe it's in a DVD set Paul found for me years ago.  I thought I'd watched the whole set, but I don't remember this one in the slightest.
William Powell and Myrna Loy made 14 films together, and the ones I've seen are all pretty terrific.  It's impossible not to dig Powell's charm and Myrna Loy is maybe one of the funniest actors with the smallest effort in all of film, and always utterly buyable.
Here, the pair team up in a screwball set-up as Powell plays an aggressively boring manager of a plant that makes cookware like pots who is out on a sea voyage when he bonks his head and rather than losing his memory, regains his memories from nine years prior when he was a shady con-man and crook, but loses all memory of the last nine.  During which he married Myrna Loy, who is set to divorce him for being so incredibly boring.
That, kids, is a set-up.
Powell is in almost every shot and scene, and you will find yourself wishing there were more Loy, but when isn't that true?  The pair are firing on all cylinders in Thin Man energy, which is remarkable when you realize Powell is coming off of cancer treatment and the death of his fiance, and Loy was getting divorced.  This had to have been some terrific therapy.
The additional cast includes familiar face Frank McHugh as a fellow con assisting Powell and giving him someone to talk to, and he's hysterical.  Edmund Lowe plays a career criminal.  Nella Walker is Loy's mother.  And a cast of familiar studio players fill other roles, including a post Our Gang Alfalfa.
The movie is light fluff and maybe a few minutes longer than it needs to be, but I can't say where they should trim.  I laughed out loud a lot.  There are some great gags, terrific word play, and I'll take a Loy side-eye any day.
Posted by The League at 8/31/2022 12:25:00 AM