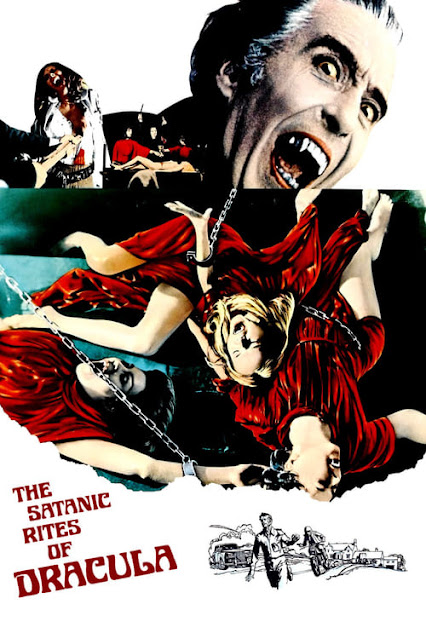 Watched:  10/03/2022
Format:  BluRay
Viewing:  First
Director:  Alan Gibson
Well, this is the final Dracula movie starring Christopher Lee as the good count, it's 1973 happening out there, and the soundtrack has a wah peddle.  I won't say I didn't enjoy this movie.  I did!  It's got Cushing still leaning into it, Lee is much more engaged than in Dracula AD 1972, and how can you go wrong when you include Joanna Lumley?
This movie follows what happens when Dracula gets himself a cult going, and managed to plan ahead.  His plan may make no sense, but it is very, very dramatic.  Some key scenes seem to take place off-camera, and you will not like the guy who they cast as "our hero".  He has a terrible haircut and is rude to Joanna Lumley while also clearly supposed to have a romantic spark with her that no one is buying.  She's clearly way, way out of his league.
Anyway, a mysterious cult seems to have recruited some deeply important people with the promise of power.  They kill a chicken and everything.  But it's secretly Dracula planning to use a super-bubonic plague that will wipe out humanity.  As the authorities bring in Van Helsing to sort things out, he sorts out that Dracula survived their last encounter and is now working to create a plague so all of humanity will die, and he will then be able to die, himself.  This idea gets no further consideration as some kinda wild stuff.
There's a basement full 'o brides, a gang wearing matching sweater vests of evil, a woman wildly othered and exoticized for being Asian, snipers, excellent use of a net, and Dracula getting caught in a shrubbery.
Joanna Lumley plays Jessica Van Helsing, seen in the prior year's Dracula AD 1972 as portrayed by Stephanie Beacham.  And her wardrobe is 70's fabu.  No notes.  She looks terrific. 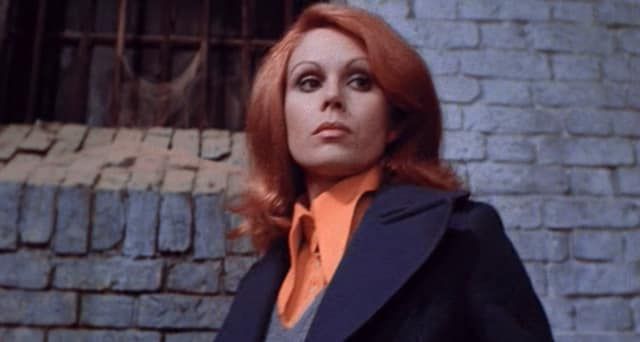 The movie plays it pretty straight, and nobody is an idiot just to serve the story.  I'm not sure how unleashing a plague requiring physical contact that becomes obvious one has said plague is particularly frightening when you realize no one would touch those people and just walk away from the threat.  Literally Lee's scheme in Captain America: Death Too Soon is 10000x more effective.
There's some kinda interesting direction here that shows we've moved well on from the TV-like set-ups on the first Dracula.  Even if the title sequence just yells "make it cheap!".  It's funny what some camera angles and not pumping a studio full of flat lighting can do.  But, man, you can also feel that this is not the world's most expensive movie when Dracula's office looks absolutely borrowed for the day.
Yes, Dracula has an office.
Anyhoo.  Go watch!  It's the last Dracula Lee/ Cushing team up.
Posted by The League at 10/04/2022 12:33:00 PM