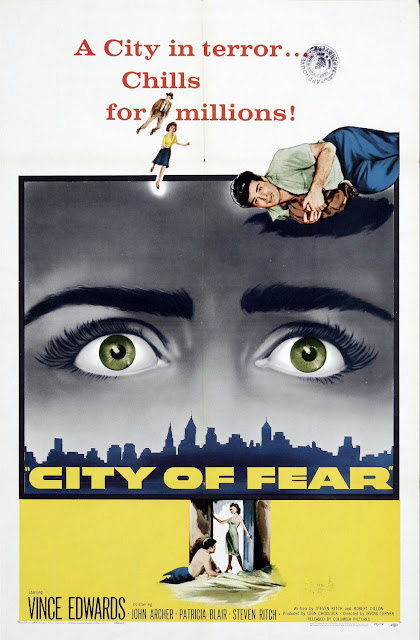 Watched:  11/19/2022
Format:  TCM Noir Alley
Viewing:  First
Director:  Irving Lerner
A low-budget crime thriller noir for the nuclear age!  Now this would be stretched into eight episodes of prestige TV, but this taught 81 minute film uses short-hand and focuses on the minute-by-minute crisis that unfolds when a pair of prisoners use a riot as cover to escape, believing they've smuggled out a canister of heroin that they think was being used to experiment on prisoners (there's your exciting B-plot as a brave journalist blows the lid off this story!  But not in this movie.).
But that ain't heroin.  Vince Edwards - our POV character and an all-around-heel - has accidentally grabbed a sealed container of the highly radioactive Cobalt-60.
Vince Edwards was a pusher before he got popped, and now he's looking to unload what he things is a fortune in horse and make good his escape, and maybe have his frankly foxy and loyal-to-a-fault girlfriend (Patricia Blair) catch up with him.
Meanwhile, the cops, FBI and various other federal agencies are on the hunt as Edwards has no idea what he has, or that if he manages to open the sealed container, he's going to wipe out LA (see that title, City of Fear).
In general, the movie is better than a lot of poverty row pictures, and while it feels cheap for a movie, if this were TV in 1959, it'd look and sound swell.  It has a soundtrack by a young Jerry Goldsmith, and it is definitely Jerry Goldsmith, so it feels oddly highbrow if you've been trained to enjoy his scores.
I don't know if this is a recommended film, but it's a great curiosity of a picture.  Kiss Me Deadly does the nuclear bit perhaps better, but this one gets the threat in front of you minute one and stays focused, making you cringe every time Edwards tries to crack the canister.  And you fully get why the cops agonize over what to tell the public as a public alarm seems necessary, but may also f'-up their search and cause undue calamity if they can find that canister first.
Anyway - not all bad!
Posted by The League at 11/25/2022 01:07:00 PM