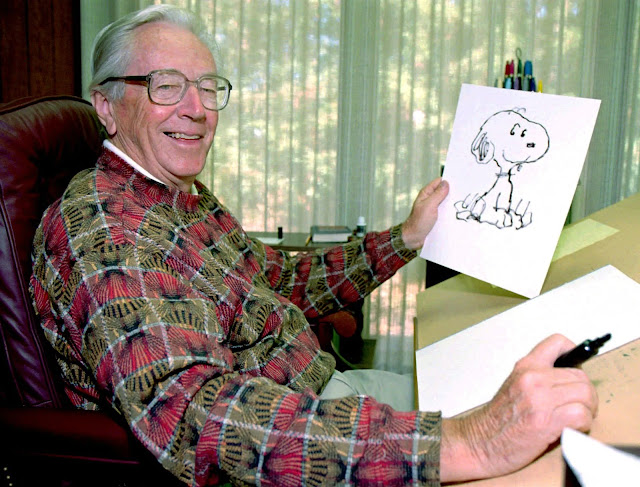 Today marks the 100th birthday of cartoonist Charles Schulz, creator of pop culture force, comic strip and animation favorite Peanuts.
The Peanuts characters are embedded into American and Western culture in ways that will mean they last for a few more generations at minimum - becoming indelibly associated with holidays thanks to cartoons playing each year for the past nearly 60 years.  These days, the cartoons live on over on Apple+, but there's also plenty of decoration and ornamentation that includes the staple characters, and who doesn't know the beats and moments of the specials, even if just by osmosis?
When Apollo 10 was mounting up, NASA asked to use Snoopy as their safety mascot.  Since, they've adopted Snoopy as a mascot for safety writ large and just kind of in general.  Even as we cross this 100th birthday, there's a Snoopy doll floating around inside Artemis as it circles the moon.  That's pretty amazing.
Of course it all started with a comic strip, and Schulz drew almost 18,000 installments over 50 years.  He created household names, concepts (Lucy pulling the football away, kite-eating trees), brought diversity to the comics page and delivered a lot of joy into people's lives.  In an era of splintered interests, it's hard to understand how something like a daily comic strip could cross generational, geographic and sociological divides as a surprisingly smart reflection of the world.
Schulz himself went by "Sparky", a name picked up from a comic strip, Barney Google (Spark Plug was the name of a horse in the strip).  He had comics in his blood and managed to keep his strip on track, and the translations of his characters to other media remarkably consistent.  It's hard to imagine fifty years of work, but he did it.  And the strips still run in papers across the country.
Schulz passed on February 12, 2000, but here we are, with Snoopy circling the moon.  Let's hope there's a Snoopy snack bar when folks are living up there.
Posted by The League at 11/26/2022 01:16:00 PM