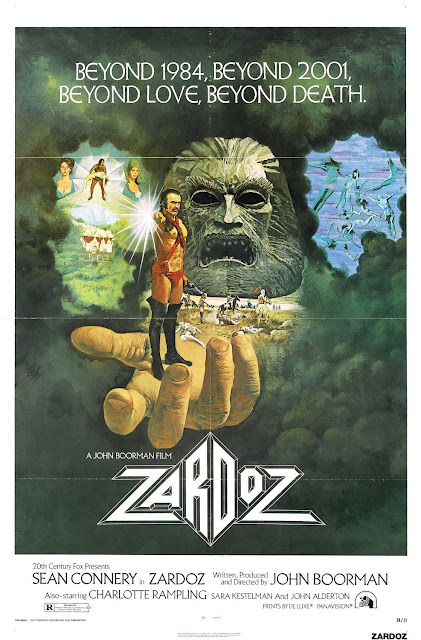 Watched:  01/20/2023
Format:  Amazon Watch Party
Viewing:  First
Director:  John Boorman
So, my college pal, Robb, was a big fan of this movie, which really set the bar for me.  He's the same guy who would pitch a Saturday as "let's watch Stalker and then Bullit".   Circa 1999 or so, my brother, Steanso, and myself decided to give Zardoz (1974) a whirl, and I think we made it twenty minutes in before giving up and watching Xena or Cleopatra 2525.
I will not say I hated or even disliked Zardoz, while acknowledging - this is not a movie for everyone.  The film contains a million concepts and ideas all crammed into one movie.  I don't think it really succeeds (for me) as story, commentary or entertainment, but it is absolutely a thing to watch for its tremendous ambition, low-budget-swing-for-the-fences approach, and unique visuals.  It's trying to do some Very Important Stuff via sci-fi, and I can't say it fails, exactly.  The ideas are interesting enough.  It's just not a movie that is amazingly fun to watch (sober).
Also, it was probably a mistake to watch Zardoz for the first time in mixed company, especially as the moderator - it has multiple acts that require trigger warnings, from murder to rape to just general weirdness - but that does happen from time to time as we try new things.  I mean, the "guns good/ penis bad" speech of a giant, flying stone head was probably my first indication this was going to go sideways.
Anyway - there is a plot, which is slow to reveal itself, about a world of the future with lower and upper castes, only the lower castes are unaware of the existence of the upper.  Meanwhile, the upper are a fe hundred years into achieving the possibility of immortality/ agelessness, and some ill-defined psychic powers, and it is not going super well.  Things have gotten a little fascisty in the upper-class colony, and they've manipulated portions of the lower cast to essentially try to wipe out the "savages" still wandering the landscape outside their invisible domes.
In addition to things getting culty for the eternal upper class, they've basically forgotten what sex is (they don't need to procreate, and began to see sex as brutal).  So, yeah, there's a lot of stuff about dicks.
At the center of this story is a Brutal named Zed (Sean f'ing Connery) who has stowed away in the giant stone head, and his arrival in the lands of the upper class throws everything utterly out of balance, even as they treat him like a pet or research animal.
There's a million more ideas, things get exponentially weirder in that UK-Sci-Fi way where plot and points to a story matter less than mad ideas, and if you reference enough things, that's like making a point through a more coherent narrative.  It's *interesting*, but I'm not sure I think it's exactly my cup of tea.  Mostly because I'm trained as an American to look for allegories and whatnot in sci-fi, or at least more clear allegories, and I think this movie is more interested in leaning into them when they make sense in the moment, and then just keeps moving.  Boorman's drugs must have been something else.
Anyway, I'm glad I punched that one off the list!  Now I can not and know what people are talking about, because most of my adult life people have just *assumed* I've seen Zardoz and started talking about it, and I was like "sure, my man" and let life keep happening without correcting them.  No more lying by omission!
Posted by The League at 1/22/2023 09:48:00 PM