I don't know if you went to Free Comic Book Day this year, or if you picked up the All-Ages offering from Oni Press, but you should have done both.

Oni Press has been killing it recently with books I've loved like Stumptown (modern detective noir) and Sixth Gun (western/ horror/ fantasy).  And, of course, they're the publishers of Scott Pilgrim.  They've also put out Frenemy of the State, which is co-created by Rashida Jones, who I will now pause to consider while Berlin's "Take My Breath Away" plays in my head.

So, the Oni Press FCBD offering gave a preview of what's to come in an upcoming 40 page book about a young boy who gains amazing super powers based upon whatever he last had to eat (except for white foods. Which is pretty clever.)

Written by J.Torres, who has done lots of stuff I've liked (but especially Days Like This),and drawn by the indomitable Dean Trippe, Power Lunch looks to be a promising book that those of us in the room who dig all-ages stuff, and for the parents out there, I think this one is going to be a lot of fun.

Now, I happen to know Dean Trippe and I share a love of old school Superman shenanigans, and just today I tweeted J. Torres to find out when the book is actually hitting the shelves.  He said:

And then followed later with:


By the way, the first volume of #PowerLunch has a Superman theme to it.

I think Mr. Torres may have seen my site.  Or my Krypto-themed Twitter icon.  But I thought I'd also share a preview image by Dean Trippe to give you a feel for how this thing is going to look, and my early clue that Trippe and Torres might be working in some Superman theming. 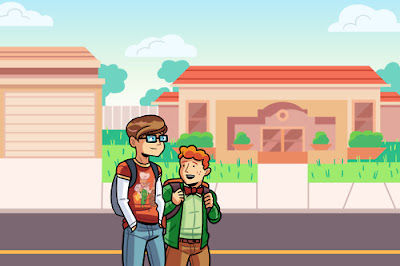