Apparently Senator Nancy King of Maryland is now campaigning on the platform that if we cut teachers, kids will turn to... superhero comics!!! 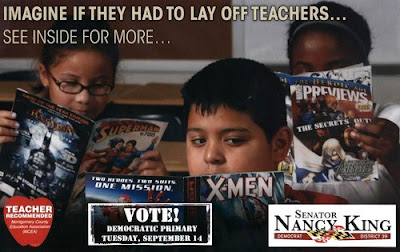 This particular ad insults me not because I thoroughly enjoyed that particular (and landmark) issue of Superman, but because they didn't even pick up any particular bad comics. Like "Hey, if your kids get a crappier education, they'll turn to Chromium Age holofoil covered comics, the new tulips of the investing world! NOOO!!!!"

The truth is, with superheroes a favored commodity among kids (and therefore, parents), this particular form of attack seems like a relic from 20 years ago, which kind of makes King look a little out of touch.

And as has been pointed out: at least these kids are reading. It might not be Silas Marner, but its not exactly these kids huffing paint, or even watching Scooby-Doo reruns because they're too lazy to fire up the XBox.

What King will expect least will be the onslaught of emails and letters to her campaign from adults all across the country who will insult her choice of campaign tactics.

Well, this is EXACTLY the kind of thing that terrifies me.