Michael Gough, the Alfred of 4 Batman movies, Merges with the Bat-Infinite 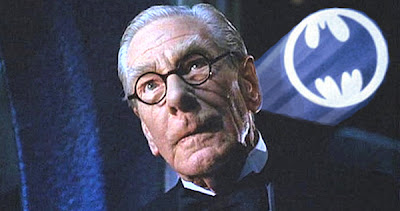 JimD has alerted me to the passing of Michael Gough, the British Thespian who played Wayne family butler Alfred Pennyworth in four Batman movies, beginning with Tim Burton's Batman and concluding with (sigh) Batman and Robin.

Gough was the first actor to bring to life the dry wit regarding his boss's nocturnal activities with which Alfred had become infused in the comics in the 1970's and which became a staple of the character post-Dark Knight Returns.  He also was responsible for conveying the flipside to that relationship as Bruce's unacknowledged father figure (see the dinner sequence in Burton's Batman).

Unfortunately, his last outing as Alfred included the "Alfred's dying, bring in Alicia Silverstone" decision which was one of many choices made by WB that knee-capped the franchise.  But it wasn't a crazy choice.  As the only actor to appear in all movies of that Bat-era, audiences were emotionally invested in the character, and what can a brother do about Alicia Silverstone's baby-voiced non-acting when his job is to lay there comfortably in silk pajamas?