I was a little unconvinced that Hawaii would make a good back drop for a noir film, and while its a little hard to feel terribly gritty around loud floral shirts and hukilaus, I think the particular neighborhood (Hell's Half Acre, natch) frames the action in an understanable way.  Even in paradise, there's always some hive of scum and villainy.  The movie is a bit even tempered for noir, and so its hard to say it has any gut emotional impact or leaves you with any particular impression, but the plot isn't all bad - ie - it's not exactly The Big Heat, but after Crack-Up, I felt like I was getting back in the Noir groove.

I learned about the movie flipping through a book on noir, and was particularly interested in this movie as it stars the lovely Evelyn Keyes and has two of my other favorite women on the silver screen, Marie "Narrow Margin" Windsor and Elsa "Bride of Frankenstein" Lanchester.  The male actors are okay, though lead Wendell Corey doesn't radiate grit so much as a sort of anxiousness, and was just overpowered on screen by Phillip Ahn. 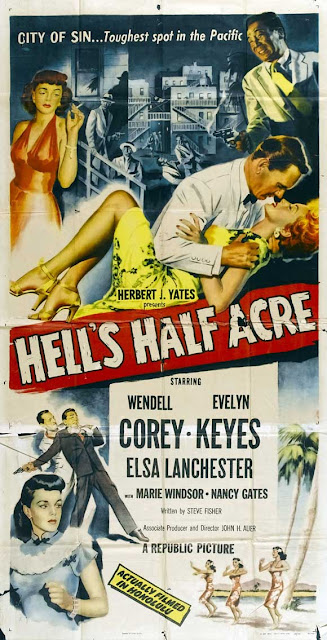 Its an interesting movie not because the plot is all that fascinating, but because there's some stuff in the movie that, frankly, I was surprised slipped by the censors, including a near rape and what appeared to be the start of a conversation regarding Elsa Lanchester's character's homosexuality.

As per things that surprised me for the time:  The movie also makes no bones about both putting Asians into the film and making it clear that there's equal footing here in Hawaii (that said, the character of "Ippy" is incredibly complicated as I have no idea if that was offensive or not.  But it was goofy.).

You guys know I love Marie Windsor when she shows up in a movie, and she gets some pretty darn good lines and scenes, but she's not in the movie all that much (though her role is pivotal).

Its probably not required noir viewing, but its interesting to see the genre moved to a location of such distinct character and the film embrace some small part of the culture of the location in order to tell a story.
Posted by The League at 3/15/2011 08:48:00 PM