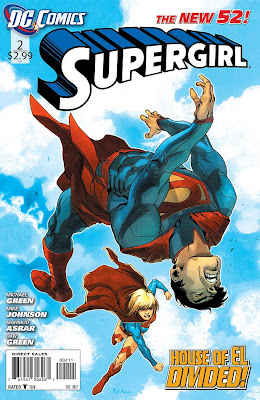 I haven't reviewed either Superboy #2 or Justice League #2 yet, but I shall, because I KNOW you've been waiting, but as the New 52 rolls out, you can't simply read this single issue in a vacuum without noting how other comics are handling their relaunches.

Last issue, Supergirl landed on Earth, stepped out of a shell, and began fighting guys in robot suits involved in the absolute most hilarious/ worst-case scenario for protocol for an agency meeting an alien entity I'd ever seen.  In this issue, all we get is Superman getting beat up by a girl half his size for absolutely no reason other than that comics still believe that when two people meet who don't know one another, the correct answer is to throw a punch even as one person is trying to calmly talk to the other.

We already did this.  Just about 7 years ago, we did more or less exactly this same thing.  100,000 readers watched the Supergirl title implode and collapse in on itself with bratty, hysterical Kara Zor-El slugging everything she didn't understand, like a hillbilly on meth.

We're two issues in, and there's no hint of a story, conflict, who Kara is, etc... and I suspect we won't see any of that for a while.  There are so, so many things for her to misunderstand and punch.

I can't believe that, given the opportunity to relaunch Supergirl (again) after the last volume floundered, the answer has been to repeat almost exactly the same mistakes that were made on the first go-round.  Its just 20 pages, 15 of which feature Superman getting slapped around and our protagonist (who apparently knows exactly how to throw a super-punch) behaving not like a scared teen-ager, but like a poorly written imbecile.  Its just embarrassing.

Honestly, this is an absolutely terrible comic.


I brought up Justice League #2, because it took this same sort of "superheroes meet, they fight" idea to its logical conclusion, with very different results.  I mention Superboy #2, because its a series using some familiar pieces, but which is trying something new, and having success at doing so.

You can't say that for this comic.  I'm all for not repeating exactly the scenes from Action Comics 252.  Clearly hilarious by today's standards - one does not take a Kryptonian just arrived to Earth and just shove her in an orphanage for safekeeping, I'd think - but this comic feels dated in a way, like it should have come out 10 years ago, and that we've moved on and know better than this in 2011.  Especially as part of a major publishing/ marketing effort.

They have to show Supergirl as on a par with Superman.  Which... why?  Loeb was all about this same idea, and it never made sense to me.  Why would Kara start off stronger than her cousin?  And does the story benefit from the idea that she will always be stronger, faster, better than Superman?  Isn't the point of teen heroes that they're kids on the learning curve? Shouldn't he be stronger?  He's twice her size and has been on Earth the same amount of time she was soaking up vita-rays or whatever.

As the "fight" will be forgotten by both characters by next issue, couldn't we have made some mileage out of Superman and Kara just cutting from the "who are you?" scene in the first pages and then cutting to the "you're on a new planet" scene from the final pages?  What do we, as readers, get from the fight?

How much more would we get out of the impact of these two people discovering one another?  Of the awe of learning "I'm not alone", or any of the many, many ways Green and Johnson could have played it.  I'll take part of an issue of confusion or terror, but we've passed the 40 page mark with nothing to glean from these characters but that "so Supergirl starts windmilling when panicked".  There's nothing to explore here.  We get superhero comics comfort food.  Men in robot suits, two superheroes punching each other, vague (familiar) images of Krypton and, by my count, the fifth shadowy organization to be introduced in a DC title since the relaunch (there are almost as many shadowy organizations as extremely wealthy people putting on masks in the relaunch).

Why wouldn't you take the opportunity to establish Supergirl as something other than rote superhero comics?  Why wouldn't you turn her into a kid-friendly sweetheart?  A Martha Washington?  An Akira?  A Dr. Manhattan?  But also - why not take advantage of the pages and medium you've been given to tell a story?  Why not try to establish characters and a supporting cast?  If I pick up the next issue, I'll have spent $9 on seeing what should have happened in 5 pages.

The interesting thing is a compare and contrast - where Morrison's Superman - also kinetic action - actually shows us things about the characters, all of them, as he goes along.  We see something about Lex's character, about Sam Lane and we see a world grappling with having this thing in their midst.  But this comic?

Look, DC... its lazy writing to fill pages and coupled with, let's be honest, average art...  its not really selling me anything new.

This isn't the introduction to a character or even the idea of a character.  This is a retread of the last volume, and a return of Berganza and Didio's odd ideas about sexy, out of control teen-aged girls who can't be tamed.

And she still has that red diaper on.  It's just bad design.

With only four Super-titles, I'm disappointed to have to drop one of them, but I can't go down the path of waiting to see if DC pulls it out again, as they took years to do with the last volume of Supergirl, well after the damage was done.  Sterling Gates and Jamal Igle did so much to rehabilitate Supergirl despite the editorial mandates of New Krypton, to try to get the character to a place where she was at least readable once again, to create a Supergirl with motivations and drive.
Posted by The League at 10/21/2011 11:03:00 AM

I went into my LCS to pre-pay for my books this week and while a guys was keeping John busy talking about MtG cards I was flipping through this issue. While I usually like Asrar's art it didn't really speak to me in this case as it was a bit "scratchy". Also, there were a couple of panels in there where Supergirl's waist was all out of proportion. Not a good issue from what I could see.

Yeah, this is the first time I've learned who Asrar is, and I'm not blown away. He's got "motion" down pretty well, but as far as feeling like this is new or different or particularly well-crafted... not so much.

I was very impressed with his work on Dynamo 5 where he had to draw a team book with each of the 5 kids having a distinct body type. A couple of the panels I saw in this book seemed really rushed. He really is a great artist and I expect that he'll only get better on this title.

Given what I've seen so far, I'm becoming convinced DC's reboot is a marketing gimmick rather than a creative/artistic choice to improve their product. Just more of the same. I think your observation in another post about the 90sfication of many of DCs new books is an accurate one. It's too bad. I didn't want to believe it, but comics days may well be numbered.

Sorry. I'm usually not this pessimistic.

I'm in agreement, Jake. The more I look at it, the more it doesn't seem like they're handling the execution part of this nearly as well as the marketing. No need to apologize. Its been hard as a longtime DC fan to process what I'm going to do here in the next few months with what's been my major hobby for years.

@Jake Shore, yeah I don't see any reason why you'd want to apologize for your statement. I originally started this DCnU collecting 11 titles and dropped down to 7 for month 2 and I'm already planning my exit strategy on those 7 books. I'm realizing that that they are cheaper in other formats and I have to say that the way women and excessive violence have been shown in other books is kinda turning me off the whole thing.