Your nickel discussion of this "The Thing" prequel

Tuesday evening SimonUK and I went and saw The Thing at the Ritz.  We'd both been anticipating the movie for some time, Si more than I, as John Carpenter's 1982 take on The Thing is sort of, I think to him, a bit like Miller's Crossing or Blade Runner are to myself.

But I really like Carpenter's The Thing, too.  I'm not much of a horror fan (I was a delicate child and prone to getting easily freaked out), but I hold The Thing and The Shining in very, very high regard for their era.

Last year Si, StevenB and I all watched a digital restoration of the original, and it was a reminder of how darn well that movie holds up, in no small part because of performances by Kurt Russell and Wilford Brimley. 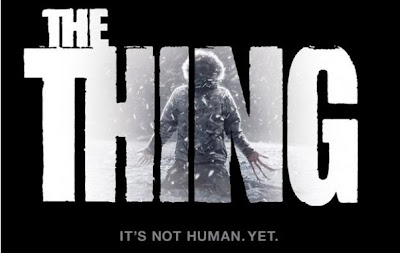 The new movie is actually a prequel, and if you saw the 1980's version, you will likely remember the Norwegian Camp.  Well, this is that.


The thing is, this is a whole lot more of that first movie.  So, either you're going to buy into the The Thing being a good idea or not if you're down with the concept.  And you're either going to enjoy seeing what went down at the Norwegian Camp or you're not.  Yes, absolutely it works if you've not yet seen the Carpenter movie, but if that's the case, I highly recommend walking out of this movie, then going and seeing if you can find a copy of the first movie.  The attention to detail between the two is pretty great, but not necessarily in a way that does much more than give you something to grin at as a fan of the original.

That said, it does lack the pacing of an 80's film in favor of the standard-issue "do not slow down, ever" pacing of most modern movies aimed at the young folk.  I'm old, and I like a nice, slow boil to my movies, and I like the post-70's era understated approach to character that worked well in Carpenter's version.  That isn't so much here, and instead we get a pretty pat approach to insta-characters, including a bland heroine about whom we really don't grow to like, in particular.  But you're going to root for these guys as the very, scary monster starts picking off our crew.

The FX are digital, and the results are mixed.  Carpenter's monster holds up really well in his version, and the digital translation is mostly okay, but, you know, I miss the glint of light on real objects these days.  It does deliver on the promise of what it might look like to see this thing in full-effect, though.

Anyhow, its a decent entry for a good Halloween horror-flick, if you're looking at movie listings this weekend.  Just lower expectations below the original, and think of it as a friendly homage, and I think you'll like it well enough.

I am SO going to electrocute your blood. I think you've been replaced.

I'm a huge fan of John Carpenter's film. I haven't heard of anyone who really liked the new film so I'll pass. I love what you said about pacing. Movies today just want to rush from scene to scene. The remake of Fright Night suffers from the same problem (I still liked it, though). The other problem is the near complete lack of subtly in films today.

As far as THE THING is concerned, I would recommend reading the novella the film is based on, "Who Goes There?" by John W. Campbell. It's excellent, and holds up remarkably well as a Sci-Fi story despite being written in 1938. You can read it for free here:

Ryan, the website Black Gate has a really funny, well written review of the new THING I think you'd enjoy.

I want to read the novella (thanks for the link!), and I need to see the original movie. I didn't love this movie, but as far as Halloween diversions go... it was fine. It wasn't as bad as it could have been, but it wasn't worthy of the title "The Thing". It was just sort of a Thing-related amusement that wasn't the "it ruined my childhood" event that it had been pitched as.

Its just not enough new, and nothing outstanding enough to warrant a prequel.