6 Years Ago the UT Longhorns won the Rose Bowl


Six years ago I was living in the wilds of Chandler, Arizona.  It is safe to say now that 2005 was the roughest year I've experienced, and its got to be up there for Jamie, too.

We had moved to Arizona in 2002.  I had lived in Texas since age 4, and had been in Austin most of my life.   And while we loved Austin, I also knew that I needed to try something different.  So, when Jamie's job evaporated in 2001, we began looking outside of Texas, eventually winding up in Arizona.

For a multitude of reasons, we never felt comfortable in Chandler (where we lived) or Tempe (where we worked), and found it exceedingly difficult to find anyone with whom we could socialize.  I will always entertain the notion that I'm a deeply unpleasant person to have to deal with unless your paycheck requires you talk to me, but I think out there, we were just fish out of water in many ways.  And, of course, Jamie's health was always an issue.

By the summer of 2005, Jamie's health deteriorated considerably.  From late spring until November, we were on an hour-by-hour watch for changes.  And, unfortunately, I had fallen into horrendous eating and sleeping patterns.

But in the Fall of 2005, the UT Longhorn football team was on fire.  Our quarterback was Vince Young, and you could just tell...  we were going to win a hell of a lot of games.  The odd part of watching such a season is that I think you kind of know early on that this could be the year, that this could really happen.  But then you watch every game wondering "is this where we blow it?"

I hadn't watched much UT football when I was actually at UT.  The team hadn't been great for a while, and while I liked some sports (particularly NBA basketball), I was also doing other things in my life than watching football on a Saturday, even when I was watching the NFL on Sundays as a way to defer the inevitable homework.

But I graduated, UT got a new coach, and I wasn't just reading about the games in the paper.  I actually tuned in.  I knew more than the name of the quarterback.  So by 2005, after the frustration of the Chris Simms era, we had this guy Vince Young step into the QB position (eventually.  We won't discuss poor 'ol Chance Mock too much).

In many ways, I have a hard time getting my head around the fact that 2005 was both My Very Personal Bad Year and The Year UT won the BCS Championship.  It seems like two completely different timelines.  Somehow we managed to catch almost every game that season, even though that was the fall when Jamie had to go back on dialysis and I recall watching at least one game on Pay-Per-View so I'm sure we missed a game or two.  If it were not for a memory of watching the UT/ A&M game on a TV at the hospital the Thanksgiving when Jamie spent her Turkey Day in a hospital bed (and I ate luke-warm turkey out of a plastic container), I'd never be able to reconcile the two timelines.

By December, Jamie had begun to stabilize.  Jason came in for Christmas, and I know we talked a lot about UT football.

Living in Arizona, we were in Pac-10 territory, and it seemed that my work colleagues were, at best, humoring me once UT was in the championship.  UT was facing down USC, and the pundits and sportscasters were insisting this game was already decided (I particularly remember Chris Berman seemingly frustrated that they were bothering to even have the game, so certain was he of USC's victory).   But what you could tell was that 1.  the pundits seemed to be working from a certain narrative rather than demonstrating first hand knowledge one would have had they actually watched UT or the Big 12 that year, and 2. sports journalists have no idea what they're talking about (and people believe them.  Its hilarious).


I wasn't certain of a UT win, but I was certain that they weren't going to just roll over to USC or get out-classed by USC.  The Big 12 was and is a competitive conference (see our bowl record this year, thanks), and stats sheets were never going to reflect the intangibles anyone who had been watching UT closely that year would have seen.  I'll be the first to say - they were winning in spite of the offensive coaching and due mostly to Vince Young and what he did to get that team fired up by playing like crazy himself.

The clip below is pretty much burned into the mind's eye of every Longhorns fan, but here you go:

I kid you not, this was as great a day as getting married, and it featured a lot more excitement at my house.  After all, there wasn't much suspense in getting hitched up.  Compared to a last minute drive for the National title, getting married just kind of happens, you know?

Anyway, we won.  It was awesome.

January 4th, or whenever the game ended, I was up and running around by myself outside my house in Chandler, shouting at the empty streets and my empty backyard.

On January 5th, I realized we were moving back to Austin.

I realized, standing out there in that dark street that I didn't want to ever watch another National Championship, or anything like it, go by without friends and family.  No kidding it helps when family is around when you're dealing with illness and struggles.  But in a way, you can kind of handle the bad stuff on your own.  You just deal.  But what I realized, between standing out there in that dark street on my own, and then sitting at my desk at work the next day wearing my Burnt Orange, was that I didn't want to do the good stuff with just us two, because, man...  how much greater would it have been to have watched that game in a room full of friends and family?

But there's something else there, too.  I am a cautious person by nature.  I check charts.  I have back-up plans.  When I fly, I carry a pair of drawers in my carry-on in case we get stranded at one of our lay-overs.  Saying you're going to pull up stakes with no job and no prospects is a bit of a risk.  But after having watched the so-called experts say that UT shouldn't even bother to show?  What the hell do people know, you know?  Especially jerks who think they've got everything all sewn up?

Sometimes you just do. 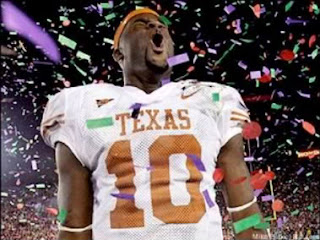 And sometimes you do the best you can and it works out for you.

In a really weird way, I have that team and Mack Brown and Vince Young (and not at all Greg Davis, whose name I will curse until one of us goes) for providing me with some of what I needed to make a big decision (and, I'd argue, the right decision) to get us to take some risks and make some changes.*

No matter what, I'll always have that game that night.  I'd love to see UT win another championship in my lifetime, and they will, but it won't ever be as sweet as this one.


*one day, I will also tell you about how Kirby's Mister Miracle became my personal avatar and spirit guide between 2004 and 2009.

Glad you did move back. Because I don't know if we would have met if you hadn't, and because Arizona is pretty much the suck.

I'm glad to have you guys back, too, but I just got back from a trip to Arizona where I saw some really cool things and hung out with some cool people. It definitely didn't feel like "the suck".

I lived in Arizona for 6 years, and my Dad just finished spending the last two years there, so it's not like I don't have a frame of reference as to what it's like there. I really didn't find much in the way of redeeming qualities, plus I really disagree with some of their ultra-conservative and racist laws.

Although, Tucson (until recently) had the only highway in America that was in KM instead of Miles. It was built in the early eighties when the nation was trying to decide whether we should join the rest of the world in measuring things, or keep our own method. Fun stuff.

Well, I'm not saying the place doesn't have it's problems, but... we live in Texas for God's sake. People in the eastern part of our state sometimes drag black men behind their vehicles for fun. We were the state that led the charge against affirmative action while I was in law school (I was at UT Law when the Hopwood case was moving through the courts), and even now our politicians are trying to carve up both liberal congressional districts that have a lot of minorities so that they won't get a stronger voice. Also, to be honest, the only reason our politicians aren't tougher on undocumented aliens is because our politicians have too many campaign contributors in construction, agriculture, and other fields who are getting rich by exploiting them with low wages (that and the fact that the Latino voting block in Texas has actually achieved a small modicum of power).
Anyway, I don't really want to play "which state is 'the suck?'", but it seemed to me that AZ definitely had some redeeming features, and, as a progressive, if you want to pick a place to live on the basis of its political orientation, Texas would most definitely also have to qualify as "the suck" (can we get a few dollars here for children's insurance, mental health care, or education, please?)

Thanks for sharing that story. Weird how sports can become historical markers in our lives. I still associate certain times in my life with particular Duck or Blazer teams. Glad your story had a happy ending. Having spent some time in the military and then moved to a new city on my own, I never want to go back to the loneliness and isolation I felt being away from family and friends.

My wife and I have flirted with moving far away from where we are, but it's just a fantasy. Nothing can replace being surrounded by people who have known you and loved you for years.

@Jason, I think Paul lived there for six years and didn't like it. Settle down.

If you need a badge that says you won, sure, you win. Texas is full of ridiculousness, too. I had to explain why the Dems were hiding in Oklahoma while I lived out there.

I'm not going to lie - I didn't like living in AZ or I'd still be out there. We all have different perspectives. I welcome you to give AZ a shot. Lord knows housing has gotten more affordable out there.

@jake - 2005 and 2006 were pivotal years for us. Picking up and moving is a mixed bag. Had Jamie not had health issues, I have no idea what our AZ experience would have been like. Why we were never able to connect with people we met, I will really never understand, other than that we were not engaged with the culture that I perceived as prevalent, and when we tried to find things that we would like to do, the geography of the city and other factors were working against us.

I don't actually regret the move. It let me know what I wanted, and I'm glad coming back more or less worked out for us. But I also am not in a hurry to explore opportunities out of town at the moment.