Movie Watch: Horse Feathers & Niagara (and one day I will learn to spell "Niagara")

I am going to mention every single movie I watch this year.  I'm sort of curious.

Horse Feathers (1932) - The Marx Brothers.  Nothing will beat Duck Soup for me, but I'd definitely watch it again.  "Where's the seal?" won for best visual gag, but it had stiff competition.  I'm a sucker for any Marx Bros. flick, and this was a better way to spend 1.25 hours than whatever else was on TV.

Also, who doesn't like a movie about college football that includes cigar smoking on the field?

The movie co-stars the lovely Thelma Todd, who has a pretty chilling Bio page on IMDB. 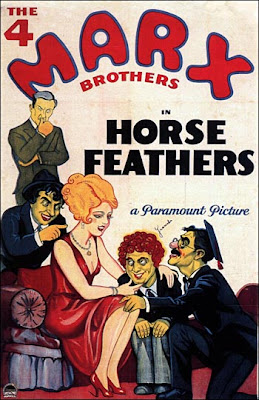 Niagara (1953)  - For something so amazingly noir, this was one bright, colorful movie.  As I understand it, this was one of the movies that catapulted Marilyn Monroe to stardom, and its not hard to see why.  We forget sometimes that she's not just a still shot, she was an actress, and a pretty good one.  Not as good as Jean Peters (also an extraordinarily lovely woman), who is also in the movie playing a woman caught up in the noir story going on in the next bungalow over, but Monroe just fills a frame like few others, even when you know she's coming.  Also stars the always terrific Joseph Cotten as Monroe's anxiety-ridden husband on the path to Dark City.  And you will want to strangle Max Showalter (who would go on to play goofy Grandpa Fred in Sixteen Candles) for his corn-fed dorkiness.