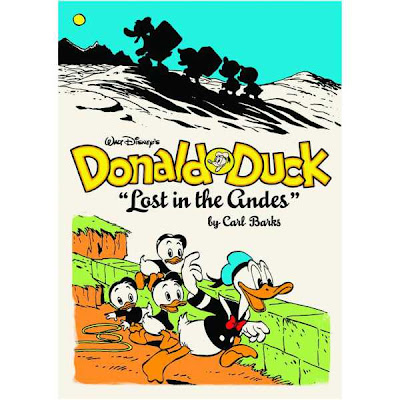 The title "Lost in the Andes" comes from a featured longer-form tale of the same name, and one that you hear about pretty quickly if you're reading any Donald comics.  Its a wildly creative story, and it looks a lot like the adventures you'd see later in the pages of Uncle Scrooge.  This one introduces the Plainawfullians, and I just don't want to spill too much in case you get a chance to read the strip one day.

Shorts include the famous "yacht lifting" comic, and I particularly enjoyed some of the one-pager gags such as the addition of a television to Donald's living room and how he solves the chaos the TV introduces into his home.

Barks' work is hilarious, cute, and tightly plotted, managing to retain a rock solid foundation of story while going off in all directions with the possibilities inherent from a goofy duck and his three energetic nephews.

I'll leave commentary on the strips to the experts, which is what this book does so darn well.  In addition to the comics, the book features an excellent introduction by Donald Ault, which is must reading for anyone who mostly knows Barks by name but knows virtually nothing of his life.  The books also features an appendix of scholarly work done on the contents of comics, taking an academic approach to reading the strips and digging in from a critic's viewpoint rather than just a reviewer or enthusiastic fan.

All in all, its a Grade-A package that would be a surprisingly good first Donald read were you to find the book at your local library.  The kids can enjoy the comics and adults might enjoy the stories as well as the supplementary material.

No doubt Boom! did a phenomenal job of bringing the Ducks back to prominence on the comics rack, but I have to be impressed with how Fantagraphics has taken an extra step and turned this volume into a comics geek's dream.

I give this book a total of 11 Donalds out of 10 and I look forward to further offerings from the Disney/ Fantagraphics relationship.

I've been reading this book very slowly as I'm really cherishing the read. I can't wait until the second volume "Only a Poor Old Man" to be released. I will concur with you 100% that this book is all about quality from foreword to appendix. It's a 240 page hard cover that retails for $32 but you can easily get for $16 which is an enormous value.

Absolutely! Its great to see what FB is doing with these classic materials.

Now for Marvel to start publishing Disney comics since the Boom! license seems to have dried up.