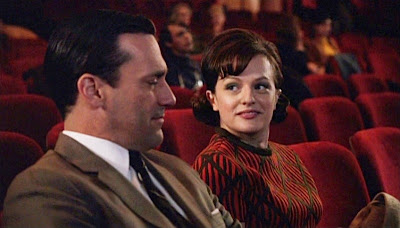 Deborah Lipp's reviews are more or less Post-Mad Men Monday Morning Reading.  And if you think maybe Lipp is simply reading too much into a TV show, there are numerous reviewers out there digging into the show each week, up to their elbows, pulling the episode apart and finding the hidden layers where the good folks at other sites might just want to talk about some awful dress they saw on Peggy.

It's a show that's moved beyond simply being great, nuanced TV in the mold of the past fifteen years, creating great characters, delivering the real performances and giving audiences a chance to get invested.  Those shows killed it with subtext and daring-do, and no doubt Mad Men owes them a debt of credit.  But I think Mad Men pushes it into metatext, self-reference and creates a resonant experience for the viewer that TV has just learned is possible in a few spots in recent years, working on a literary level other shows suggest they're doing but what they're really delivering is just a game of connect the dots.

Sure, I'm gushing, but what should have been a period piece about hanky panky in the office has morphed into a new mode of television for which we should all be pretty happy to have around, even if Mad Men itself isn't your thing.  If we're going to build these longform narratives, let's try to do something with them other than string an audience along to see what the aliens are up to, what's the secret of the island, who killed the one-armed man, or even whatever the hell they were trying to say with Six Feet Under that felt like so much flailing after a season...

This season was occasionally a bit on the nose, but that's a bit on the nose by Mad Men standards.  That means someone saying something aloud which might partially express the theme.  I've said it before and I'll say it again: I think it was necessary to get a bit louder to bring in the viewers who still thought they were watching a soap about Peggy vs. Joan or Betty vs. Everything.  And it made a difference.  This year, it seems like the conversation online seemed to be discussing what was said and done, and finding the small bits set their to hint at the theme or plot.  And that's okay.

When the elevator shaft was shown, immediately everyone said "oh, who will fall down that?".  No.  (a) That was already famously done on LA Law and (b) that was missing the point of the scene.  Mad Men has never been about rewarding the audience for guessing what will happen next except in knowing when characters experience a shift.  After all, that's the big question at the last shot of the episode, wasn't it?  The elevator was saying something else, and its up to us to figure out what that was (yes, I have my ideas).

Do I want to know what happens next?  Sure!  I'm not made of stone.  But I also like a show that's driving this sort of discussion without me feeling vaguely embarrassed for the folks over-guessing or over-analyzing bits far beyond any intended significance.  Yes, that happens a bit with this show, too, but we don't really have a handbook for either this sort of television or for Mad Men itself.  Not yet, anyway.

I'll just pretend you didn't knock Six Feet Under and focus on the rest of this post by saying: exactly. The early episodes in particular feel like very specific explorations of American literature. Like The Wire, I think the series, once done, will really have to be explored as a whole, with each season as a chapter.

I'm in the minority with my "whu..?" reaction to Season 2 of Six Feet Under. And, admittedly, I think I gave it two episodes of that season and was out.

It did work to build a coherent narrative, and maybe I need to give it another shot some time. But I kind of felt like they were so shocked to get a second season, they didn't know what to do with themselves - at least when I was watching.

I guess at some point I may have to give Mad Men another try. Maybe. We also lost interest with Six Feet Under after the first season. I didn't even know you guys had ever watched it.

We watched the first season when it initially aired a long time ago. Maybe in 2002? But, yes, it was sort of not my thing after a while.

Per "Mad Men", we have all the seasons on Blu-Ray on Blu-Ray, and its available via Netflix streaming. I look forward to your explanation as to why this show is stupid.