We saw Birdemic 2 in Austin (and it was awesome!)

This evening Jamie and I drove up to the Alamo LakeCreek to catch the second installment in your favorite franchise and mine, Birdemic II: The Resurrection.

Two feet inside the door of the theater I spied my favorite director, and...


James Nguyen does not pass up the chance to get his picture taken with a good looking dame:


The movie stars...  well, an absolutely startling amount of the cast from the first Birdemic film.  Kudos to Nguyen for getting the band back together.

I've seen Birdemic: Shock and Terror somewhere in the neighborhood of 8 times, I own the BluRay, and I bought Damien Carter's single "Hangin' Out With My Family" on iTunes.  I'm a fan.


If you're just catching up, in the first movie, after Silicon Valley software salesman, Rod (played by the amazing Alan Bagh), meets lingerie model Nathalie (the lovely Whitney Moore), his company goes public and he's able to parlay that money toward his dream of a starting a solar panel company.  No sooner does Rod take Nathalie out for a night of dancing to the tunes of Damien Carter and then bed her in a Motel 6 than a swarm of Eagles and Vultures attack the Half-Moon Bay area, killing damn near everyone.  Until they doves convince them to fly away.

In the second film, Rod's old pal, Bill (the stellar Thomas Favaloro) is a movie director who had an indie darling, then flopped as a Hollywood director and is set to make his indie comeback with his script, "Sunset Dreams".  En route to meet up with Rod and his ladyfriend, Nathalie (they're still together!  Love prevails!), Bill meets Gloria (the fetching Chelsea Turnbo), an aspiring actress.  Rod and Bill make a financial agreement and... anyway, one thing leads to another, Bill and Gloria dance to the tunes of Damien Carter, make it in a Motel 6, and then a swarm of re-animated prehistoric eagles and vultures attack Hollywood, killing damn near everyone.

I'm leaving out a lot, because... much like the first Birdemic, seeing the thing unfold is what it's all about.  The first Birdemic was a cult hit, a sincerely made romantic thriller made on the cheap and with a lack of professional gear and training on the part of Nguyen - who did the whole darn thing himself.  It's a quixotic, environmentally conscious bit of filmmaking that results in a startlingly good time at the movies.

So, my biggest concern was that we'd never recapture the magic and we'd get a film where Nguyen knew where people had reactions he hadn't expected in making the first film, and that he'd try to do it up bigger again.  And, yeah, I mean, that sort of happens, but not really.

Clearly the producer, Jeff Gross, knew that the only way to make this work was to just give Nguyen money and get him locations, etc... and let him go.  Not too much money, but, you know, some.  And its the right combo.  It's a bigger Birdemic, a better paced Birdemic with all sorts of things going on I won't spoil, and it hits all the right notes of shock, terror and resurrection.  If you enjoyed the first movie, it's not just more of the same... it's Nguyen on a new and bigger scale with more toys to play with.

Jamie and I agreed: it's a different vibe from the first movie in that you're kind of used to the James Nguyen aesthetic, but it's also a really, really fun movie, especially if you know and love the first movie.  The dialog is pure Nguyen, the FX budget is maybe... doubled?  But uses the same FX, more or less.  It's a true sequel.  Only now, it's all a sort of commentary not on Nguyen's life in Silicon Valley, but his observations on Hollywood, movie-making (he's clearly discovered Billy Wilder since making the last movie), romance and the fact that you can get people to do anything in LA if you promise them a role in a movie.

It's a crazy meta-ride of a movie, with the stars aware of the cult status, of Nguyen aware of its popularity and wanting to please but wanting to make his vision of a movie without watering it down for anyone, and some hilarious lines I'm not sure weren't improvised here and there (you're a terrible shot).

Nothing about the movie disappoints.  Sure, it'll never be the same as the first time again, but for a movie I went to see with a little bit of trepidation - lest my expectations not be met... no, sir.  It's all kinds of ideas thrown up at the screen, with terrific dialog, the return of our heroes, and many, many characters returning for an encore.  And we even get a look at what happened to the two, sweet kids from the first movie.

No stone is left unturned.  And, do not miss the Damien Carter dance sequence.

After the film, I failed to check off a bucket-list item and get a picture with Alan Bagh, but I did get a poster signed by the three gents above.  That is going to confuse the @#$% out of people at work.  However, I did enjoy the Q&A with the stars, Nguyen and the producer.

The good news is that YOU DON'T HAVE TO WAIT for the movie to come to your town!

Birdemic 2 is now available for download at Chill.com!  So, friends, you can thank me later for making your weekend. 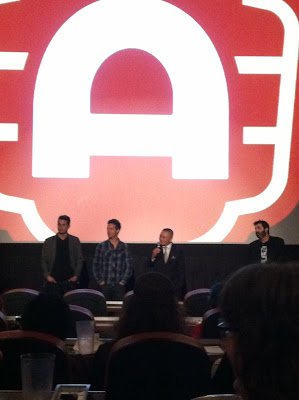 I'm still trying to figure out if listening to Damien Carter and then making sweet love in a Motel 6 precipitates bird attacks or guarantees your survival in case of an attack.  It's the only common denominator in both stories.