Richard LeParmentier Merges with The Force

I don't attend many signings, but a few years back I had opportunity to meet actor Richard LeParmentier when he was in town and Austin Books and Comics held a "Star Wars Day" in his honor.

It was a total circus.  Turns out, people like Star Wars and getting to meet Admiral Motti.

Mr. LeParmentier was very gracious, and signed a photo of himself that I keep on my desk at work.

You can kind of see the picture in my hand there.  It's a picture of LeParmentier in his classic role as Admiral Motti in Episode IV who questions Vader's devotion to the force and gets force-choked until Grand Moff Tarkin puts a stop to it. 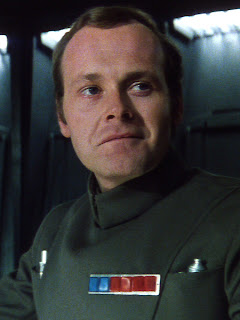 He even drew a square on the Death Star with an arrow and note that says "my office".  It cracks me up every time I look at it.

I keep the picture on my desk facing whomever sits across from me, but in the years since, not once has anyone gotten the subtext.  It's a disappointment.

As Mr. LeParmentier was so nice to me and is one of the few folks I've had opportunity to meet, I am even more saddened to hear of his passing.  I'm even more sad to hear that, reading this article, that he lived in here in Austin or his children reside here, according to the ABC article.  I had no idea.

Godspeed, sir.  It was a pleasure and honor to shake your hand.