Between longer audio books, I'll sometimes do a Vonnegut book.  After finishing a 37 hour book-listen, taking on a decent audiobook that's at a mere 6 hours can feel like a downright vacation.  Sure, I know I'm missing a lot by not seeing Vonnegut's doodles and intentional use of the page, but, I figure, better this than the fact I'd never get around to it as a sit-down read.

Mother Night (1961) was released a few years prior to Slaughterhouse Five, and also deals with the lives of participants in World War II during and after the war. 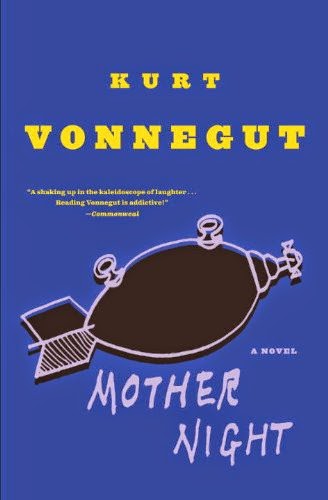 Told as an account by Campbell himself, as evidence to present at his coming trial in Israel, the book makes interesting use of time, assuming the audience will not be surprised by many aspects presented and revealing many things immediately rather than at key points to create surprise, were the story a straight chronology. It certainly has the matter-of-fact quality I've come to recognize in Vonnegut's work.

Howard W. Campbell was born in the United States but moved to Germany as a child with his engineer father and his broken mother.  As a young man, he becomes a playwright, and as the Nazis begin their rise to power, he is recruited to become a spy for the US inside the Nazi machine, where he becomes a leading propagandist, including English-language radio broadcasts.  Unfortunately for Campbell, few knew of his true role as an agent, and at the end of the war, he is freed and goes to New York where he spends years mourning his German-actress wife, killed on the Eastern Front entertaining troops and trying to be forgotten.

He befriends an artist living downstairs who we are immediately informed is a sleeper-agent Russian Spy who has been in the US for decades.  Soon, he is unearthed by American neo-Nazis who laud him as a living martyr and patriot, which draws unwanted attention in numerous forms.  But, ironically, it's the hero-worshipping Nazis that return the love of his life to him, someone he believed lost in the death-throes of the Third Reich.

Like all Vonnegut books, there are no easy answers, everyone is a lunatic, and all of it feels far more terrifyingly identifiable and real than a straight novel with straightforward characters.  Despite the fact it was written fifty years ago and the book is of it's time, it's also stunningly relevant, which, I suppose, is why Vonnegut is still a favorite.

I don't know what to say about the novel.  It's a challenging book, exploring who you really are if no one knows who you are.  Does it matter that you were working for the angels if your work for the devil produced ontold harm?  Does it matter if you weren't the one who actually pulled the trigger?  How do you own that?  And what does it matter if people do eventually find out you had another agenda?

I just finished it yesterday.  I suspect I'll be processing it for a little bit longer.  I'm sure someone brighter than myself will have more to say about it.
Posted by The League at 4/09/2015 04:25:00 PM

Damn. I'm feeling my age because I remember reading and loving this book, and while your synopsis brought some of it back, I'm still blank. I remember snippets only. I'd say it's time for a re-read. This was my favorite Vonnegut by far.

This is definitely one of Vonnegut's best works. I still chuckle when I think on how Vonnegut wrote that it was the only book of his that had a point.

It certainly feels like the one that wanted to have a concrete moral the most of any of his books. It doesn't make it bad, but it does feel a little less askew than, say, God Bless You, Mr. Rosewater.