Christopher Lee Merges With The Infinite 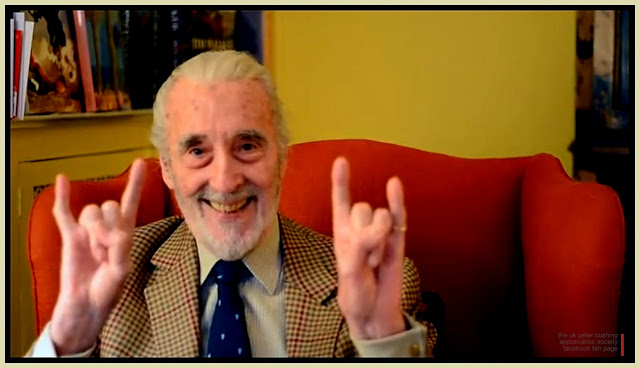 This is a tough one.

Actor Christopher Lee passed away this week at the age of 93.

Christopher Lee is one of the first actor's names I remember, which is weird, because I knew him from a book I read and reread as a kid about movie monsters, but I didn't see his Dracula movies until fairly recently.  And, seriously, he's phenomenal.  Hammer Horror has it's own style, and at the heart of the best of those movies, you could often find Christopher Lee as a Dracula or Mummy or Frankenstein.

He's also in The Man with the Golden Gun, one of the diamonds in the rough of the Star Wars prequels as Dooku, unforgettable as Saruman in the Lord of the Rings trilogy.  And he always seemed to show up in Tim Burton films.

Prolific beyond imagination, he's been part of movies for most of the time there's been movies.

If you want to feel like a heel, read up on Lee's WWII service record, which will make you realize you've basically done nothing with your life.  Then add his movie career on top of it, and, this man fit the lives of two dozen people into his life.

And all of this was before he took up heavy metal. Specifically, what he dubbed Symphonic Metal.


We'll miss you, Christopher Lee, but we'll always be glad we had you.

Just out of curiosity, was the monster book the Dracula edition in this series?

This was my first exposure to Mr. Lee.

or "Movie Monsters" but I couldn't tell you which http://horrornews.net/wp-content/uploads/2010/12/Movie_Monsters.jpg