This was a curious little movie.  It had name talent, everyone from Matthew McConaughey to Reese Witherspoon to Sam Shepard to Joe Don Baker, but aside from McConaughey, lots of folks took a back seat to the teen-aged actors at the forefront of the story and were in parts no bigger or smaller than actors you've not heard of before. 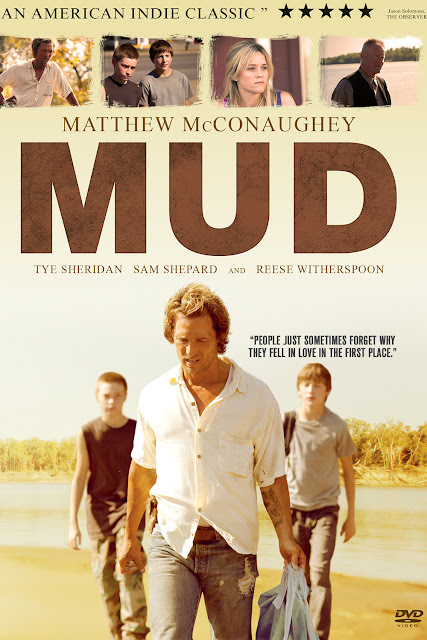 Storywise, Mud (2012) reminded me a lot of the indie features I used to catch at the Village Cinema in Austin back before it was converted into an Alamo Drafthouse and I was at the movies 2 times a week, minimum.  Set in rural-ish Arkansas, the movie follows a 14 year-old Ellis and his friend "Neckbone" (a name I shall be bestowing onto my nephew when the time is right), at that odd age between young childhood and before anyone is remotely close to treating you as an adult.  Ellis and Neckbone live in river country and head out to an island where they plan to claim a boat as a treefort as the boat has gotten stuck in some boughs during a recent flood.

Up in the tree they come upon a rogueish drifter and decide to give him assistance, first out of curiosity, and later, as they come to hear a bit more of his story, out of the secret loyalties that you feel are perfectly reasonable at an age where parents and teachers loom large and secrets are the only freedom you've got.  Meanwhile, Ellis' parents are busting up and the life he knows on the river may be ending, and he meets a girl.

Truth to be told, it's an odd movie.  Had it been released in 1995 instead of 2012, I suspect many aspects would have been handled differently and different choices made.  It does want to summon the tone-poem quality of a Days of Heaven at some points, but always retracts to something a little more familiar.  And, if you're one of the few people who've seen George Washington, it's hard not to draw comparisons.

Full disclosure and a little name dropping - I went to college with the guy who scored both movies, David Wingo.  So it was inevitable I'd drop some comparisons, but it's also true both want to bask in the warm summer feel of the overgrown decaying South, and that world is terribly important in both movies and the stories could not be told without their particular settings.

I don't talk about acting a whole lot except in terms of "oh, man...  that guy is terrible", but when you back into a slower paced movie such as this one, that's what you're paying for, and this movie helped mark the return of McConaughey as a force.  He is, genuinely, very good in this movie, as are our child actors and even Michael Shannon in a smaller role, but very different from what I've seen him do.  But you really have to give it up for all of the kid actors who hold their own and feel like honest-to-god believable kids going through something they barely understand.  Ellis is played by Tye Sheridan, who is playing Cyclops in the next X-Men outing, and Neckbone is played by Jacob Lofland, who spent some time on Justified.

The movie telegraphs the ending in ways I found maybe a little clunky and surprising for what they were going for, and even the final denouement feels a bit - well, I think this movie would have ended differently had it been released in the 90's or early 00's.

The movie does set out some serious work for itself, overlaying Ellis' family issues with his experience with Mud and his issues and throws in a romance for our young protagonist to give him a point of personal reflection, and it's a lot.  And it mostly works, but you can occasionally feel the gears working.

None of that means I didn't like the movie.  I did.  And I should probably watch less stuff with people in tights punching lasers and stuff and more things like this.  I just... you know, I wind up putting on my film student hat and taking these movies apart and looking at the pieces in a different way with contemporary dramas, I suppose.  I'm maybe more interested in what the pieces were that went into it than just sitting back and watching the thing if the movie isn't moving along at a ridiculous pace and is utterly devoid of helicarriers.