Man that is one hell of a movie.

I can't tell you how pleased I was to watch this movie a second time and see things I hadn't seen before.  Dialog, character beats, things like that.  Always the mark of a good movie.

There's not all that much to mention other than that on a second go-round I got to enjoy more of what was going on in the movie and not just desperately hang on with both hands and try to keep up.  But everything you've been reading about the old-school expertise filmmaking in a 2015-era film is right, right down to the use of "fade to black" as transitions between acts.  And, really, no mainstream movie has done more to show rather than tell in years. 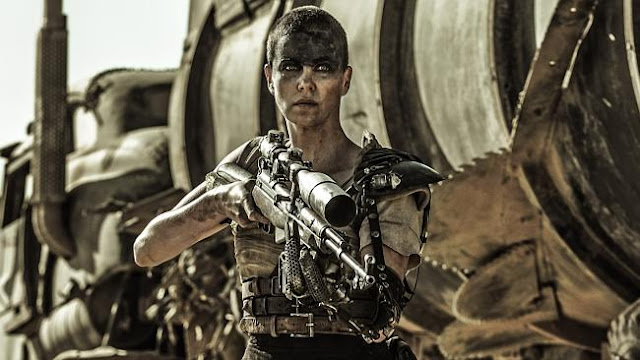 And you can't really say enough about George Miller's sense of world building.  If anything fell apart in the 1980's cheap post-apocalyptic knock-offs, it was pretty much every single detail, but it started at the lack of thought put into the world - what was it like living in a world where the grid had fallen apart?  Everything is built with motivation in mind, and not all of that motivation says much good about humanity.  But it drives everything from vehicle design to the mythologies and modes of survival.  It's what some of the best movies do on screen, sci-fi or otherwise, and Miller has been living in this world a long, long time.

I love this movie so much. Call me a softie, but I found it to be pretty emotional the second time around.

The filmmaking is just top notch. I'm not so sure I'll see a film any better this year.

While I thought the movie was enjoyable, I did not find it to be as good a film as the first Mad Max. Also, I noticed quite a bit of digital artifacts in the image such as edge pixelation on some shots that took me out of the film on an emotional level. That says to me there wasn't much to connect with on that level anyway. I watched and enjoyed the spectacle, did so twice, but I was left feeling like the spectacle wasn't enough.

Yeah, I completely disagree. I also grew up in an era where you could see strings on space ships and Jaws had a hinge on his mouth and we still enjoyed the movies, so a few stray pixels here and there don't really plague me. And I'm more inclined to agree with JAL above. As much as I enjoyed the spectacle and throughline the first time through, but on the second go-round, connected quite well with all of the characters on the War Rig, especially the lifelong struggle of Furiosa.