This evening we took in the second, not lesser, but - indeed - final installment of the TV movie exploration of Marvel's Sentinel of Liberty, Captain America in Captain America II: Death Too Soon (1979).

The movie is perhaps even more of a curiosity than the prior attempt, but it's worth noting that Wonder Woman - which we sort of think of as fully formed, first aired as a TV movie with tennis-pro Cathy Lee Crosby as a jump-suited, blonde Wonder Woman prior to the decision to try another TV movie pilot with Lynda Carter, which led into the series (which had to switch networks and decades before the 1977 season, just to make life more complicated).

Things were a little different back when you had to actually be home to watch TV when it aired, and once it was gone, it was gone.


I genuinely feel this movie is better acted and directed than the origin story, and the plot plods along at a mosey instead of a painful death march.  I'm not saying this even good TV, but I am saying it didn't physically hurt to watch (even if I did end the movie with a migraine halo).

The plot:  a rogue general/ terrorist mononamed Miguel (I know) played by horror movie superstar Christopher Lee (I KNOW) has kidnapped a scientist and is going to hatch a plot to poison American cities and then hold them for ransom unless he is paid for the antidote.  The poison basically makes the victim age super quickly.

Steve Rogers goes to a small town to try to uncover the plot, and posing as his artist self, sets himself up in town when he realizes the townfolk are scared of something.  And then he's threatened by some of Miguel's henchmen who send a message by enhancing Steve's painting of his cat, Heathcliff by painting goggles on to Steve's carefully crafted work of art.


The poison is sprayed over Portland, Oregon in the form of skywriting.

Steve races to a prison where Miguel is pretending to be the warden and where there's an exciting 20 second shot of Cap reading a map.  I had time to turn on my phone and walk over to the TV and snap a pic while this scene went on. 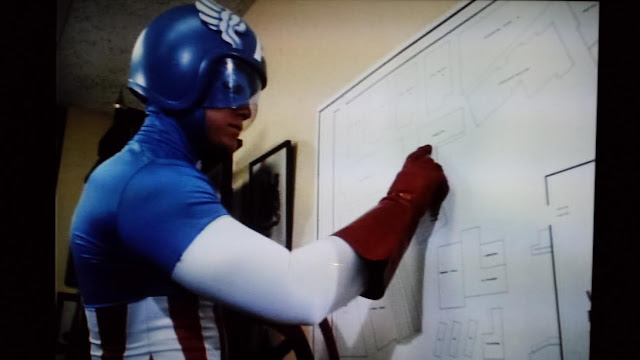 But, no lie, this movie felt not only far more competently directed than the first, Reb Brown feels marginally more like a real actor in this movie, which is pretty telling that something went wrong during the first movie.

I need to do a little bit of digging because it feels like something must have occurred behind the scenes.  Actor Connie Sellecca plays Dr. Heather Mays in the second installment, but the same role was played by Heather Menzie-Urich in the original film.  Actors get replaced all the time between pilot and series, but there were two scenes in which I was pretty sure that was Menzies-Urich back in her labcoat, but the character went unnamed and I can't figure out if that was her or not.

I'm supposing reshoots were impossible with a scene containing a big cat (they demonstrate the success of the aging serum on a puma... because... yeah), and a pick-up or two was not had to replace her.  I dunno.  Maybe it wasn't her, but it sure looked like it.

The movie has some truly wacky moments, from Steve hurling both self and bike off of a huge dam in a bit that must be seen to be believed.  There's a hang gliding chase sequence that's not entirely unsatisfying.  A scene where Steve is attacked by dogs but it looks like friendly dogs who just want treats.  And the attempts to show the "shield throw" look...  not good.

Look, it's a 1979 TV movie, and it doesn't hold a candle to other stuff that you might compare it to from then or now, but that's also why it didn't go beyond these two movies.  Reb Brown has hit his groove here, and he's much better when the dialog isn't weighing him down like a ton of bricks.  But it's hard to say how good this show could have ever really been.  It had a few kid-friendly bits I still dig - Cap should always shoot out of a conversion van on a jet-powered motorcycle - but the plots are surprisingly unweildy and tedious in both movies.  Could of used a little Red Skull or HYDRA, I guess.

These will always be the real Captain America movies! I just get so tired of Hollywood always feeling the need to remake the classics.

if 15 years of being online with nerds has taught me anything, it's that there is absolutely somebody out there just furious about the new Cap movies who watches these ones over and over.

I think we can all agree that cat looks a lot smarter now.

I almost died at "SMIL"?