Electra Wut? There's a new Electra Woman and Dyna Girl show coming. Because of course there is.

Oh, Deidre Hall.  You and your magnificent coifs.  And Judy Strangis of the gigantic eyes.

They may not have had Lynda Carter's budget (nor been Lynda Carter), but they had their own thing going on, including an amazing vehicle and the finest special effects you could produce using video overlays in 1976.


Seriously, only Lynda Carter may have rivaled Deidre Hall for amazing hair in 1976-1977, and both knew how to make a superhero outfit work.

I have only the haziest memories of Electra Woman and Dyna Girl from my own youth.  The Sid and Marty Kroft shows were still on in rotation around 3:00 in the afternoon in the 1970's and early 80's, but it's hard to say what I remember as snippets and flashes of memory and what was what I caught later in college (and afterward) on basic cable.


Electra Woman and Dyna Girl were reporters who would go to their secret HQ where an avuncular uncle-type would act as their Alfred/ Q, and set them off to go fight a colorful bunch of bad guys.  Including villainous glam-rockers and spider witches.

And, they had one of the goofiest super-vehicles since the Supermobile.

Nobody really worried about what their powers actually were, but it was a fun show.  And gave young women hair to aspire to.


In the 1990's, I think Fox decided to have a go at a very 1990's take on the concept, with Markie Post playing Electra Woman as a boozing wash-out and Anne Stedman as her perky niece or something trying to get her back in the game.

I don't actually remember much about it, including whether I watched it. 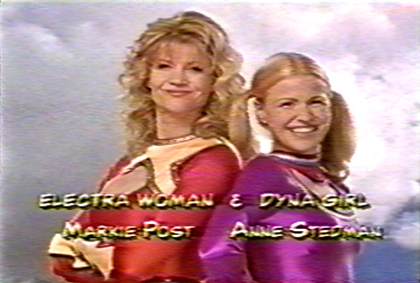 Well, it's now 2015, and if you don't have a superhero franchise, you're just failing.

It looks pretty much like most Canadian-shot shows, and I wonder how long it is before we're all totally familiar with Vancouver.  And I guess we'll all have to accept that the capes and tights are gone.  And the hair.  And the three wheeled vehicle.  And Deidre Hall.

Aside from that, I have no opinion, and I don't even know if/ where it's airing.

Man, the Fall 2015 TV landscape is going to be as crowded with superheroes as the schedule once was with lawyer, cop and doctor shows.

Mostly, right now, I'm feeling off my game because this was apparently announced months ago, and I just stumbled across it today.
Posted by The League at 5/31/2015 01:57:00 PM

I heard about this a few days ago. At this point, all the supers on TV are starting to slush together in my elderly brain.

I personally would prefer a return of a different Kroft show - Bigfoot and Wildboy.

Thank god for the internet. For years I couldn't figure out if Bigfoot and Wildboy had ever existed, and then... one day... YouTube and IMDB provided me with all the data I needed to know that the show had not been a fever dream.

Bigfoot and Wildboy should only come back if they do a crossover with Finding Bigfoot.