This isn't the first time I have read Red Harvest (1929) by noted crime and detective author Dashiell Hammett.  In fact, it was the first Hammett I ever read, but it was about fifteen years ago and over the course of a few plane rides, and after reading my fair share of Hammett since, I could only remember snippets here and there and the general plot and tone.  But with Hammett's birthday recently passed, I decided that was my cue to revisit the book. 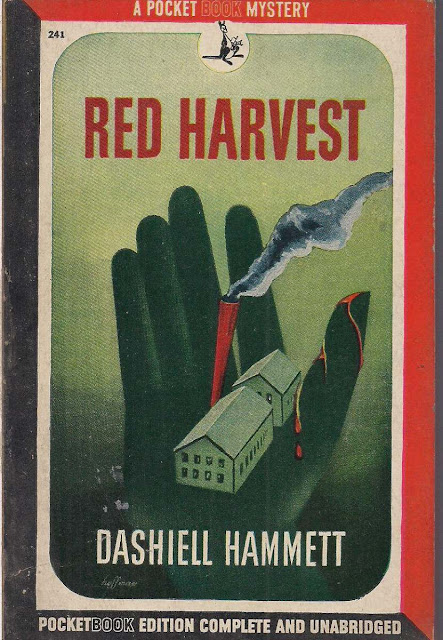 It would seem this novel inspired a whole lot of other stuff from general tone to dialog to whole films, but to my knowledge it has never been translated into a movie of the same name with the same characters.  And it's just as likely the things the book inspired were, in turn, the inspiration for other works.  There are certainly similarities to the book in the Kurosawa movie Yojimbo (but Kurosawa states he was inspired by The Glass Key, a different Hammet book turned into a movie with similar themes - and the movie has Veronica Lake, natch), which in turn would have inspired A Fistful of Dollars and the mediocre as hell Last Man Standing.

I'd argue that the Coen Bros. were obviously nuts for Hammett, and Miller's Crossing is essentially a particularly strong blend and distillation of Red Harvest and The Glass Key, in everything from plot similarities to character archetypes to Hammett's very specific dialog and use of slang.  Further, the term "Blood Simple" is used more than once in the book, and is - not coincidentally - the title of their debut film.

Hammett had a favorite character, a detective who refused to name himself (cough... Man With No Name... cough) in his narratives.  The character appeared in what must have been dozens of short works published in magazines like Black Mask and which are known as The Continental Op stories.  A private detective employed by The Continental Detective Agency usually solves crimes around the Bay Area during the 1920's - the period during which Hammett was writing (and drinking, one assumes).


In this book, the Op is called into a mining town a bit off the grid called Personville, but which - anyone who knows it, refers to as "Poisonville".  He's to assist a local muckraking newspaper editor who wants to clean up the town, but before he can even meet with the guy, our editor winds up gunned down in the street.  Following the trail leads to the very real mass corruption in the town with the editor's own father, a mining magnate, at the center of it.  The magnate asks to get the town cleaned up, and the Op - sticking close to a manipulative, money-grubbing lush who passes herself around the town's power players - starts to dismantle the organized and corrupt system, switching between teams and staying on the inside while bullets start flying.

Of the Continental Op stories, it's the longest I've read, and of Hammett's work, goes into some of the darkest places.  Maltese Falcon may play at a more personal level, but Red Harvest just grows and grows in complexity and, like Maltese Falcon, has a certain moral center to it even as the characters swim in a sea of ambiguity.  In this case, though, we're dealing with whole mobs at war rather than grifters who'd gladly slide a knife between your ribs.  Our Op, who usually keeps a clear head in the short stories, is self-aware enough that he becomes aware how enmeshed in all of this he's become, and it plays for some interesting scenes.

While I did not read it with the same eye-popping surprise as the first time, I think I appreciated the intricacy a bit more this time and the overall character arc, especially after reading so many other Continental Op short stories.

I read this as an audiobook, and narrator Richard Ferrone was a pitch-perfect choice.  With a voice like he'd eaten a bag of broken glass, he could still completely change it up for various characters, and he nailed the hard-boiled gumshoe bit.  I was wary at first as I thought it might be a bit over the top, but it does work, even if it wasn't how I'd pictured the character's voice previously, and within a chapter I was enjoying him immensely.  I just Googled him, and it seems he actually won an award for this book, so go figure.
Posted by The League at 6/05/2015 10:45:00 AM