Some time in 1989, with the success of Tim Burton's Batman now making the idea of superhero movies an attractive financial reality, I remember walking out of a movie and into the lobby of a local theater here in sunny Austin, Texas (Great Hills 8 then, The Arbor 8 now), and seeing the poster below: 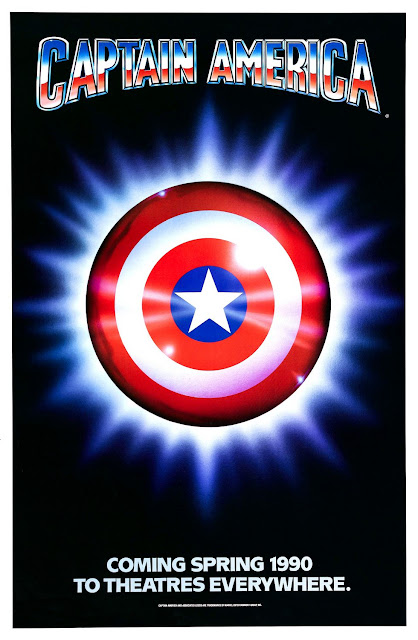 While I was aware this was Marvel running to catch up with their own non-flying, non-laser slinging superhero, I was also pretty jazzed.  Captain America seemed pretty attainable as far as superheroes went.  I had vague memories of the 1979 movies, I'd been reading a little Cap here and there, and I really wanted to see someone smack bad guys with that shield.

Then, Spring and summer 1990 came and went, and no Cap movie materialized.  I was a bit of a showbiz follower, and I knew what it meant when a movie was delayed or shelved (it rarely meant they were holding onto the movie because they just forgot to release it).

Flash-forward to on evening after June 2002.  I had moved to Phoenix and was already up a little late,when the TV told me they were going to air the 1990 Captain America movie.  Rather than just set the DVR and go to bed, I sat up with the movie until the bitter end.

The film was grainy and desaturated, and I remember that slow sinking feeling of despair setting in that was once so common when it came to portrayals of superheroes on TV or in movies.

Because for a long time, it seemed like a point of pride for movie makers to take the source material of a comic book superhero and obliterate it in favor of whatever the director felt like doing.  Sometimes this worked - and both the Burton and Nolan Batman movies work as movies even if they're not exactly Dark Knight Detective movies.  Prior to that, I'll admit that Superman had completely ignored much of the comics in favor of doing their own thing, but they did keep core elements in place enough that they managed to make the movie clearly a Superman flick.  Even Wonder Woman, which you guys know I think is the bees knees, rarely featured super-bad-guys and never any of her established villains.  It just hung tight to being a good show with a solid lead character.  And, it's safe to say, Lynda Carter and Christopher Reeve's takes on the characters wound up deeply impacting the post-Crisis on Infinite Earths DCU.


But you also got movies with Shaquille O'Neal as Steel, the wretched JLA pilot or the hidden Roger Corman Fantastic Four movie.  Or Billy Zane as The Phantom.  And stuff that Millenials bemoan not happening, like Jack Black as Green Lantern or Nic Cage as Superman, but...  if you were there at the time and not sitting in 2015 ironically wishing for these things to exist, you would have been extremely glad these movies did not occur and take out superhero movies once and for all.

Look, a lot of that stuff was just sheer garbage, and it's nice to sit through a movie and not have to make excuses for what you're seeing on screen or have to find things to like about it.

Really, going back and watching those two mid-00's Fantastic Four movies will give you a pretty good idea of how those movies looked and worked for the most part.  Re-writing characters for no reason, cartoony and stupid exploitation of the conceits (remember Mr. Fantastic dancing at his bachelor party?).  And, someday, we should study all of the attempts at The Punisher as an exploration of the evolution of approach to superhero movies.

So.  There's your context for this Captain America movie.

We should talk about this movie.  It seems I purchased it on BluRay, because I am a clever fellow who makes sound financial decisions.

This movie literally feels like it was put together by crazy people or 13 year-olds were given permission to tell adults what to do in a feature length movie.

To give you an idea, you kind of know you're f#$%ed with this movie when the paper on the table meant to establish the scene reads "War Rages In Pacific and Europe".  Like a headline would have been written in 1943.  News, everybody.

In this version of Captain America, Steve Rogers comes from a large and loving home in Redondo Beach, California and has - for reasons never explained why or how - volunteered to participate in the Operation: Rebirth experiment.  He doesn't seem as if he's in the military and we only meet him as he's saying good-bye to his family to go get Vita-Ray'd.  He also says good-bye to his sweetheart, Bernie.

Despite a gimpy leg, we're assured he was the best candidate of 600 volunteers, which tells me they must have had a long line of non-ambulatory folks wanting to be experimented upon.

So, shooting took place in Yugoslavia, and that seems to have driven some odd decision making with the movie.  For example, all of the villains in the movie are Italian (it abuts the former Yuogslavia.  Check a map.), played by a wide variety of Eurotrash and models.  And Eurotrash models.

The Red Skull, played by American actor Scott Paulin, is Italian in our version of the story, and our doctor who created the Red Skull - also Italian.  Really, there are no Germans in WWII in this story. 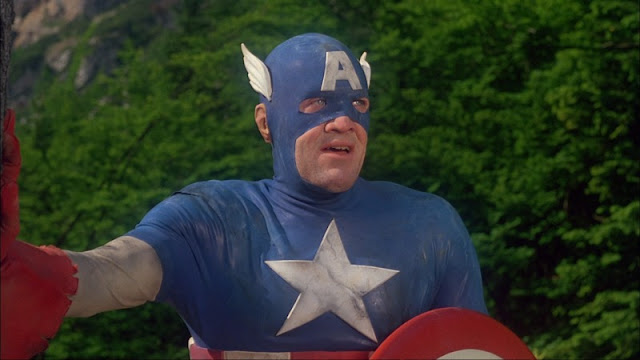 Steve gets shot after the Nazi blows the lid off the experiment and, while still lying in bed, is told he has five days to stop the Italians, I guess, from starting an air strike.  Why conventional means of stopping the airstrike are not an option is not for our ears to hear nor our minds to know.  Cap parachutes in, utterly untrained, does pretty good work with his shield and then gets the crap kicked out of him by the Red Skull.  Italian style.

So, basically, Cap's entry into WWII is a total disaster and in no way does he become a living legend.  Instead he gets strapped to the rocket because Red Skull thinks its funny.  Rogers grabs the Skull's hand just before the rocket takes off, and for reasons that defy even the most primitive instinct and all reason, the Red Skull machetes off HIS OWN ARM instead of just cutting off Captain America's arm which is literally right there and he's defenseless.  And no one really notices or deals with the amputation again.

There's then the inexplicable decision to tie the modern-day President of 1990 to WWII and Cap by having a boy-aged President of 1943 be the only person in the US to witness not just the rocket barely miss the White House, but to see Cap in clear detail as he's kicking the rocket to knock it off course.  And Kid President happens to snap a great picture of Cap in the dark at night on a rocket going something like Mach 10.

Flash forward to 1990 and the President has ordered the military to reduce all solid waste by 90% in the next 6 months.  Really.  Because the President is, apparently, not afraid of insane plans that can lead to very public big-scale failure.

The General is in league with The Red Skull, and they begin a diabolical plot to put an implant in the President's brain that will allow the Red Skull to control the President's mind!  Which actually sounds about right for a Marvel Comics villain plot.

The Red Skull, by the way, has a daughter, here named Valentina, who hangs around with loyal thugs who also all happen to be models and who all look bored as hell.

Cap awakens, stumbles through Canada (he just wanders off from his ice block despite ten witnesses) - is somehow found by the Eurotrash and Ned Beatty simultaneously (and, keep in mind, he's walking through the woods just somewhere in Canada, nowhere specific).

And he's just goddamned awful at being Captain America.  He gets shot, runs away and depends on Ned Beatty's largesse to escape with his life from a single biker with a gun with 8 bullets in it.

I don't want to rehash the plot too much, but further adventures include faking the need to vomit in order to get out of a car in order to run back to the car and drive off with it.  Twice.  A reunion with the girlfriend and her daughter - played by the same actress, but despite casting the same person twice, they look totally different.  Lots of running around uogoslavian resort towns doubling as Italy.  And utterly terrible use of the shield, that makes you believe Steve should just pick up a machinegun.  Or a rock.  If you're going to have him use a shield, at least make it make cool or preferable to literally any other weapon.

Most odd - basically, for the duration of the movie, any enhancement Steve has received as part of the experiment is almost totally ignored.  He's just treated like a generally big guy who has this shield thing that's about 30% effective.  The "man of out of time" bit isn't played as a guy who's having trouble adjusting, it's played as a guy who has fallen through a wormhole in time and is acclimating horribly.  There's no real build-up to Steve being special or interesting in any way.

The dialog is almost uniformly nonsensical or terrible.  In his grand speech about how he'll blow everyone up, the Red Skull uses potato imagery.  The President gives a somewhat dictatorial speech on losing millions of jobs so we have less plastic, but we have to do it or we'll all die.  It's just lots of stuff that feels like, maybe, they could have used some polish before letting the cameras roll.

And I have to wonder what the filmmakers and studio folks who fought so hard over the making of this version said to themselves when they saw the new Cap movies.

As I said above, it was sometimes really hard to watch a well-worn, well-honed story that had worked for generations get tossed in favor of whatever the folks working on the movie had in mind to do and came at the material with contempt.  But I don't believe that's the case here.  I think this was a very small pie with a lot of people with their hands on it all wanting a big piece and leaving the folks who should have been driving the story with too few scraps to work with and maybe not all A-List talent to complete the project.

As much as I enjoy the Chris Evans Cap movies, I've always been a little sad that he's not in the regular old Cap outfit with wings on the head and all.  But...  you know, they tried really hard here and when Salinger holds still, he looks okay.  In Avengers II I think they cracked the nut for the costume in the modern era, and I am now okay with the helmet sans wings.  Because I can't bear to see wings wobbling on Caps head or catching on things.  That's just wrong. 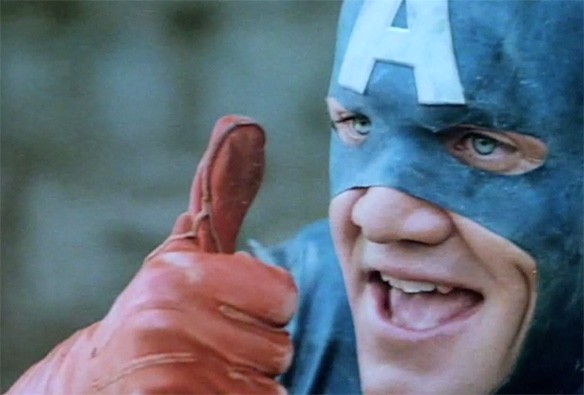