It's been a long time since I've seen this version of Captain America, but I am pretty sure that this was also my first real exposure to Ol' Wing Head.  What's weird is that I remember knowing who Cap was when I watched the movie, but I don't know why.  I didn't own any Captain America comics until 4th or fifth grade, so I guess I was watching those "throws his mighty shield" cartoons. 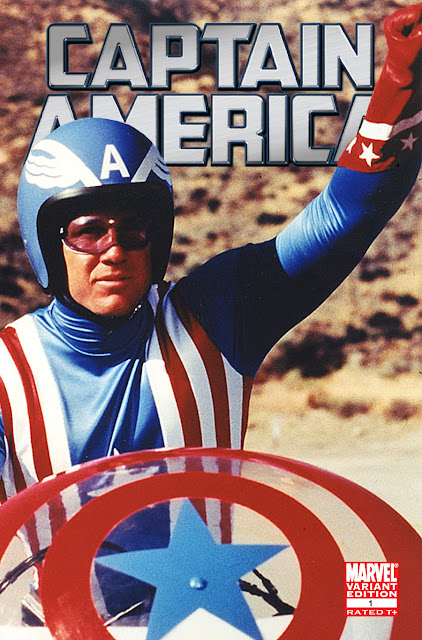 If I had to guess, this movie was intended as a bit of a pilot for a Captain America TV show, and the movie didn't get the eyeballs that they were hoping for.  This would have been after Wonder Woman and The Incredible Hulk were on TV, so there was recent precedent for making super-heroes work on TV in a dramatic context, as well as sci-fi concepts like The Bionic Woman/ Six Million Dollar Man franchises.  But, if I am going to pick nits, the primary difference between those shows and Captain America (1979) is that the Captain America movie is very, very not good.

The sins are many.  It nonsensically overcomplicates Cap's origin, strips it of any WWII-era ties, and goes all in on post-Watergate cynicism regarding patriotism while paradoxically insisting we "cram Captain America down their throats".


There is some speechifying from the leads about getting out there on the road... seeing America.  To be fair, this was stuff happening in the comics on the 1970's (Cap was a wandering artist for a while, Green Lantern and Arrow teamed up with a Guardian and went to "see America").  There's certainly a push for a mythic "America" you'll find out there in 1970's mass media (Thanks, Easy Rider),  but you need a certain gravitas to pull that off, and our cast doesn't really have it.

The movie has pacing issues and performance issues aplenty, in no small part due to the starring performance of Reb Brown as Steve Rogers.

"Reb Brown...?" you're thinking.  "Man, that sounds familiar."  Well, he's also the star of MST3K classic, Space Mutiny.  And, now, ladies and gentlemen, without further ado, one of my favorite MST3K bits of all time.


And, seriously, you have to see Space Mutiny sometime.  It's the best.

Reb Brown is a gigantic blonde man, and that's how he got cast.  It certainly wasn't his ability to deliver a line, which comes off somewhere around "second play for a high school student" and maybe exactly as "local town's summer production of Picnic".

But the movie just sort of plods along, refusing to ever let Cap really punch anyone, throw the shield, or do much but hop around in a stunt or two, and spends what few "action" scenes there are mostly watching a stunt double lacking Reb Brown's swollen physique ride around on a motorcyle.  And, man, do they love that motorcycle.  They spend as much time on the bike than they do on what's up with Cap.  And when Cap finally DOES become Cap (it's convoluted and takes forever), he doesn't do much that any other schmoe couldn't do, honestly.  And he also just rides around in a  helicopter like a chump for a bit.

Taking a page or two from the Six Million Dollar Man when it comes to his abilities, he's got a smidge of super strength and he can jump and apparently eavesdrop a bit on the phone calls of others, but... yeah.  What they suggest he can do never really blows you away on screen when he does it, which is funny, because, man, I've seen 3 seasons of Wonder Woman and that show had some great stunts.

I will say, I don't think the costume - although a change from the comics - is awful.  And they DO introduce the classic suit at the end of the show (apparently his dad used to wear it as a proto-Cap?).  It heavily relies on Reb Brown's linebacker physique, but for what I suspect could have been true of a 1970's Cap with wings sewn to his head, subbing in a well-painted motorcycle helmet and goggles feels like a more than acceptable replacement. 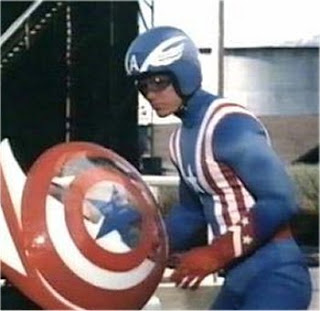 Just going to leave this here.

I think I finally found that perfect piece for the dining room.

This is like a punk rock superhero movie. It may not be very good, but it convinces you that you could go out there and do one yourself.

This is absolutely true.