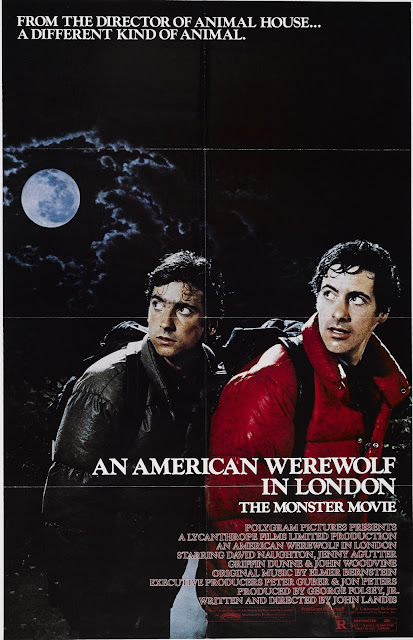 As An American Werewolf in London (1981) concludes, the screen goes dark, and then the following appears on screen:

It's one of the oddest moments in an incredibly odd horror film, one that was part of the 1980's deconstruction of media tropes as the generation of film and media students got jobs in the world and Marshall McLuhan's ideas trickled into the zeitgeist.

The internet suggests that the tag regarding the marriage of Prince Charles is there as a sort of pre-emptive apology to Charles for hurling a homophobic slur at him in the course of a scene where our lead character is trying to get arrested, but it's also part of the undercurrent of the alien nature of an American in England, werewolf or not, that's part of the movie.  With England's somewhat stricter censorship rules of the time, perhaps that bit might have required an edit for a UK release.  I don't know.  But it's just one more bit of an American trying to behave himself in England and making a mess of it, as something that can't possibly be taken as anything less than an eye-rolling apology to propriety.  Frankly, I don't know how any American would meet such a congratulatory message with anything but a groan or chuckle at the end of a brutal werewolf rampage and Creedence blasting from the Dolby sound system.

You know, this is the same filmmaker who brought us Animal House just a few years before.

We didn't necessarily need to meet any particular criteria for what a horror movie was, anymore, Landis was saying.  We can be genuinely funny.  We can be snarky and a but subversive.  And we can be absurd.  But none of that, he seemed to be saying, really makes a good werewolf rampage any less horrific.  Just, you know, bizarre.


The first time I saw this movie, probably in college, I liked it well enough, but found it confusing in execution.  I liked it.  After all: Jenny Agutter.  But this wasn't a gothic horror picture, and wasn't the Talbot family and it's staid life on the moors interrupted by a bit of bad luck got by mixing with the working class.

An American Werewolf in London picks up with the middle-class American characters that began inhabiting films during the early Spielberg era, centering on a back-packing young man and his friend wandering the moors of gothic novels and movies.  They're worried about dumb stuff young men worry about as they enjoy the countryside as tourists (not that Larry Talbot doesn't spend considerable time peeping on his own love interest).  They can't take any of this seriously.

The set-up makes sense, with the frightened villagers in place of the gypsies, and even the obligatory mysterious werewolf attack to kick things off.  But this movie takes place in a world where people have seen Lon Chaney Jr. in glued-on fur and a flannel shirt.  Jack, the guy who isn't going to make it, seems to know the movie pretty well, and he's the one who has questions when they stumble into a rural pub with a pentagram on the wall and some iffy imagery on the sign out front.

It's what follows, really, that begins to make the movie diverge.  David, the one who manages to survive the werewolf attack - and, therefore, will become the werewolf - begins having visions in both his dreams, and, then, visits from his decaying pal as an hallucination.  Director John Landis handles the coming change with such a sense of welling madness and pervasive doom, it's the sort of thing horror media ingested and made a part of itself since where it may no longer seem as jarring.  But, in this case, it's in stark contrast to the sense of cheerfulness he tries to wear and which everyone expects of him, despite the shock of his encounter and the faulty police report by dim Scotland Yard staff.  The world about David is both alien in its Englishness, and inane in it's insistence on simplifying and getting about the workaday.

As I recently said to my pal (SimonUK), it's an oddly sensible movie.  The characters are reacting quite normally, including David, who hopes all this will just pass.  He's got a good looking nurse who's taking him home, and that's kind of trumping the whole "I'm being haunted by my dead pal" thing that's going on.  Cops have an open and shut case.  Only the doctor seems bothered by any of it.  Even the nurse who has watched him get physically better is willing to dismiss his dreams as something to get over, something that will pass and he'll be ideal boyfriend material (this is actually the hardest part of the movie to buy as, you know, you'd think she'd start to get more than a little concerned about what she just brought home).


And it's against this kind of pedestrian backdrop that everything else doesn't just feel horrific, that absurdity asserts itself.

David's visions are the stuff of nightmare, from the pleasure in tackling and consuming a deer to the super-weird Werewolf SS invasion of his parents' home (again - the horrifying and absurd in a single scene).  The decaying Jack, played to perfection by Griffin Dunne, still chirpily makes suggestions such as "kill yourself so others won't die and I can pass into the beyond".  It's just good stuff.

Of course most folks remember the transformation scenes.  A young Rick Baker put together one of the things that never felt quite right in the previous werewolf movies: (A) a werewolf that's a proper beast rather than a furry human, and (B) a proper visualization of the werewolf transformation from first painful symptom to the mandibles extending into a muzzle.  Today it may seem a bit on the rubbery side, but its still an effective sequence in terms of look, editing, and sound.

And, of course, the chaos.  The sheer, delightful, chaos that begins to unravel with that first real transformation, culminating in David waking nude at the zoo in a wolf cage and stealing balloons.

This movie would never get made today.  And, frankly, I don't know how the hell it got made even then.

Again, this was back when Landis was on a roll.

I've mentioned previously how I like a good werewold rampage, and, boy, do I.  I think I totally broke the mood in the theater when I saw that iffy Benecio del Toro Wolfman remake a few years back by cackling my way through the entire finale rampage through London, and I suspect that this movie is ground zero for me when it comes to "oh, wow, this is great".  Because that last transformation in Piccadilly Circus is just the best.  So, so much chaos.

Of course, it all ends in tears, because that's how you end a werewolf movie, I guess.  And there's tragedy and pathos there, but I don't think Landis is all that focused on you walking out feeling too bad.  More..  "well, that was really something", which is usually how I feel every time that movie wraps.

And, you know, everything worked out for Charles and Di, so...  we got that going for us.

I really love this movie. I know I saw it long, long before I had any business watching it. Plus, Frank Oz's performance is just great.

There is a staggering lack of good werewolf movies. If you ever see "When Animals Dream" pop up on Netflix, I recommend it. https://www.youtube.com/watch?v=SigQHY1uc74

I have been recommended "Dog Soldiers" which I want to watch sooner rather than later. Opinions?

I've not seen it, but have meant to. It sounds a bit "concepty" which has always given me pause.