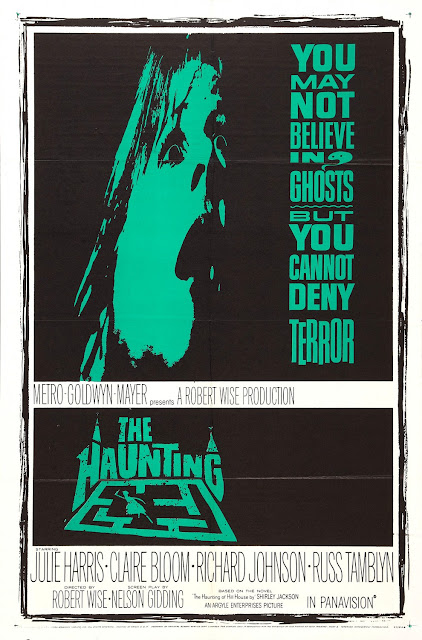 I watched The Haunting (1963) for the first time back around 1999.  I recall that the first two Octobers after I graduated from college, free from homework and other school stuff to do at the time (and with a job that really, genuinely ended at 6:00 most days and had a ten minute commute), I was free to binge-watch scary movies.  And, so, Jamie and I kept heading back to Austin's I Luv Video until she told me to knock it off, she was tired of black and white movies.  I'm still nowhere as caught up as I should be.

It was during those first two Octobers that we rented The Haunting, likely because I'd seen it mentioned somewhere in an article on "must see scary movies", but I've forgotten what got me to reach for the tape in the first place.

I recall we watched it during the day, the blinds closed, and, still, we were both utterly petrified by the movie.   Or, at least as petrified as I ever get from a movie.

Monster movies generally aren't really all that scary - just weird and uncanny.  For scary, I like atmosphere and breaching the unknowable, I guess.  It's probably why stuff like The Shining sticks with me, but I see Friday the 13th as a sort of comedy.  Of course it's suspenseful to wait to see who will get stabbed next, but it's an inevitability.  It's just waiting for a shoe to drop like a punchline.  And gore is gorey and hard to look at, but that doesn't make it necessarily scary.  I don't like looking at rotting hamburger meat and I don't want to touch it, but I'm not scared.  I'm repulsed.

I'll take a good "what the hell is going on?" to qualify as scary in my book.  The unexplainable and inexplicable, add in a dash of madness, and I'll qualify something as scary.  And The Haunting has that in spades.
Based on the book The Haunting of Hill House by Shirley Jackson, the movie follows paranormal researcher Dr. Markway as he first rents Hill House - a place believed to be haunted and with a background of tragedy heaped upon tragedy in its 90-year existence - and, then as he recruits a special breed of assistant to help him in his research and observations of the property.

The focal character, as in the novel, is Eleanor, a woman who has spent the first decade of adulthood caring for her invalid mother who has recently passed.  She may or may not have had a bizarre experience as a child, a manifestation of a poltergeist, or some other pschokinetic activity.  Eleanor is naive, childish, and borders on manically anxious.  She flees her sister's domineering eye to join Dr. Markway.

Hill House of the film is a massive, Queen Anne/ Victorian mansion - an imposing structure with windows for eyes, looking down upon Eleanor as she arrives.

Soon, she meets Theodora, dressed in high mod fashion of 1963.  Played by Claire Bloom as whip smart, observant, and with an edge thanks to her seeming ability to read thoughts and impressions from others.  And, the most curious bit for a film from the era, clearly sexually interested in Eleanor, but in coded and elliptical terms, even more so than the ambiguity of the novel.

Exploring the hallways, Theo and Eleanor become lost, seeking a pathway to meet Dr. Markway.  The nature of the house reveals itself as they become increasingly confused.  And, before anything has truly even begun, Eleanor is pulled into the house, and only the accidental intervention of Dr. Markway seems to save her from disappearance into the shadows.

I watched the film on BluRay on a 1080 TV, and it's the best resolution I've had the opportunity to watch the movie, and whether it was the new disc or that I was paying better attention, the lighting used in the film throughout really struck me this time.  The movie does not rely on much more than the careful manipulation of light and sound around the characters to convey the circumstances, and - from the first time when I watched the movie with no idea what to expect - to this screening, the most recent of many and now with the novel under my belt, it's the lack of FX that actually makes the movie work.  There's nothing to look at for wires, no seams in make-up, no outdated visual trickery save for one scene, and even that effect still holds pretty well.  Upon this viewing, I wondered - had I seen the movie prior to or during film school, what would I have wanted to try?

I hesitate to write too much about the actual haunting scenes, lest I spoil it for anyone who hasn't seen the movie yet.  But the first time I saw the scene, it struck me as viscerally believable in a way no prior haunting movie ever managed to do before.  The scenes were something from shared or common experience, from the sound you hear that wakes you in the night in your own home to the uncertainty and helplessness of being off kilter in a strange place where the explicable feels quite the opposite as you huddle in place.

The movie is beautifully designed, shot in England on MGM soundstages and using a real house in Stratford-upon-Avon for exteriors, and with a sense of claustrophobia in the overly ornate rooms, covered in decorations with human forms, up to and including oversized human statues in one room.

A few changes are made from the book, changing - for example - the role of Dr. Markway's wife in the proceedings (here, she's a skeptic rather than a spiritualist).   Markway himself is no longer a retirement-aged bumbling academic, but a handsome man in middle-age, and a source of attraction for Eleanor, setting up a sort of love-triangle with she, the good doctor and Theo.  But there's considerable fidelity between the novel and movie.

It is not too difficult to wonder about Eleanor's mental state from start of the film to the last moments.  Moreover, it's not too difficult to wonder if the combination of Eleanor's supposed telekinetic ability, her madness and Theodora's mind-reading haven't pulled together into a perfect storm for a self-fulfilling spiritual event for two people scaring themselves in the dark.  Or, you know, the house is evil and twisted, and has ghosts walking the halls.

It's that unknowability that keeps the viewer guessing.  Something is happening within the walls of Hill House, and it will end poorly, no matter the reason.   While I am on the fence as to the usefulness of voice-over in movies, this is one case where I do believe it enhances, and that's due to director Robert Wise's careful and thrifty scattering of Eleanor's inner monologue, not so panicked and overwhelming here as in the novel, we still can see that Eleanor is not the quiet, patient person the doctor and Luke (Russ Tamblyn in his Russ Tamblyniest performance ever) believe her to be, and that Theo is onto from jump.

It's an interesting movie, still, even after numerous viewings, and still a favorite of mine in any genre.