Halloween Watch: Revenge of The Creature (1955)

Firstly, yes, this movie absolutely features a very young Clint Eastwood as a scientist in a walk-on part.  My jaw was on the floor.

Secondly, there is no Julie Adams in this movie.  Lori Nelson is fine, but... yeah.

Thirdly, apparently you can see this movie as an episode of MST3K, so you know what I'm doing with my Thanksgiving break. 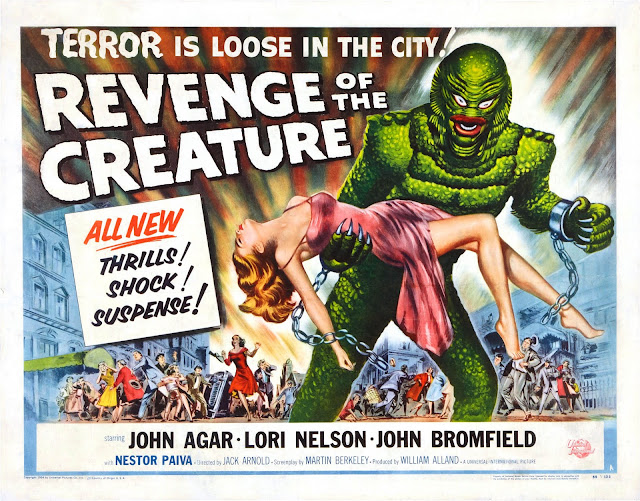 I literally have no idea why (a) it seems like Universal really struggled with making a good Creature of the Black Lagoon movie after the first movie, and (b) why someone hasn't remade a Creature movie in recent years when, frankly, the formula shouldn't be complicated.  He's a super strong lake-monster with claws and a penchant for destruction.  Get on it, Universal.

I promised myself I'd watch the two remaining Universal Creature sequels this Halloween season as I'd owned them for about 10 years and never watched them, always totally happy to watch the first film.  The first sequel screening went a little poorly.  For me.  But I'd watched the movies out of order, jumping from the stellar first to the third film which killed the franchise.

Tuesday evening I took in Revenge of the Creature (1955), a sequel released just a year after the 1954 original.

The logic of the set-up isn't that crazy.  We had survivors in the prior film, and the stories they told spawned interest in the Gill Man.  Thus, someone finances a hunting expedition of sorts to the Black Lagoon to capture or kill the creature and bring him back to civilization.  It was the middle of the 20th Century.  We could shoot or kill or displace whatever we wanted to for science.

Whereas the first film took place on the creature's home turf, we've duped ol' Gill Man into our trap and within 20 minutes we're somewhere in Florida in this movie, placing Gil in a tank at a proto-Sea World.

For some reason, the brash brawny gentleman who captured the Gil is kept around for part of the story back in Florida, but here we shift focus to two scientists I'll call Dick and Jane, because... who cares.  Scientists in sci-fi movies of the 1950's were being turned into the real he-men of the pictures, and the muscley brutes had less to offer.  It's a curious elitism that you find only really in those sci-fi pics, and this is the most explicit I've ever seen this play out as Dick decides to woo the pretty young Jane who has come to see Gil as part of her ichthyological research, and in a single scene, wins over Jane with his gigantic mind, pushing the muscled, good looking aqua-jock aside.

But, the old-school fear of white women being taken by non-white-men we just really nailed in Birth of a Nation and gave monstrous form to in King King continues from the Julie Adams pursuit in the previous movie.  Now, our creature has noticed the buxom Jane, and he must have her.  To do what with?  It's not clear.  It's hard to think he would see her as much other than a nice take-out dinner, but with perky young women of European descent the ultimate prize in the context of Hollywood, how could he NOT want to take her down into the briny depths with him?  And...  watch her drown and decay, I guess.

I'll be honest, the people in this movie are pretty awful.  They basically capture and torture Gil for a goodly part of the movie, doing nothing to seemingly learn about the creature other than finding out what awful things they can do to him and how much he won't like it.  All by placing him in a foreign watery environment at a frikkin' Sea World where they announce over the PA that they're still trying to figure out what he eats.  And they keep hitting him with a cattle prod.

So, 1/3rd of the way through the movie, I was rooting like hell for Gil.  I wanted nothing more than to see him escape and go on a blood-soaked rampage among these grinning idiots.

Sadly, that never really happens.  I mean, I know the movie was aimed at kids coming to the theater for a Saturday matinee, but it's really surprising that the filmmakers didn't just go for it a bit more.  When I see Gil wander into an overpriced sea-food restaurant with a terrible jazz band, I want to see creature claws a-flyin and people screaming for a damn good reason.

The movie doesn't really come to a conclusion.  It just ends.  And, badly at that, and in a way that makes you even more furious at the characters in The Creature Walks Among Us.

In the end, the movie is killed by Florida panhandle cracker cops because he touched a white woman, and/ or they forgot their net.  I dunno.  It's infuriating, and the creature never really gets a good shot at killing all of them.

In general, I find all of the Universal Monster characters sympathetic to some degree, but over the course of three movies, really, Gil just gets treated like garbage by a lot of people who are royal jerks, all except for Julie Adams.  If Frankenstein's Monster is a misunderstood child-being who has been forced into an unwanted existence, then Gil is a smart fish man who was doing just fine, thanks, until those morons decided to practice science like second graders with a sharp stick.