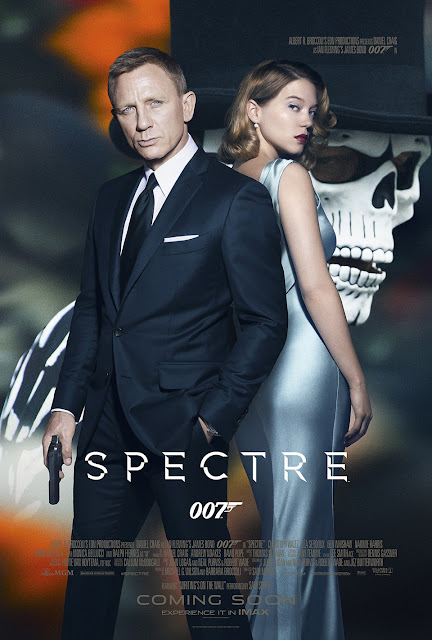 So, I'm not entirely certain how to write about this film, because it is absolutely a continuation of the last three Bond movies, which I enjoyed a lot, but I can't say I've rewatched them a dozen times.  So, first recommendation - while you don't have to have seen the last few movies (there's exposition), if you have time to rewatch them real fast before showing up, certainly can't hurt.

Luckily, I've seen Skyfall a few times, so I remembered, for example why that building in the middle of London had a hole in it.

I also don't want to spoil a movie I'm certain most of you will go see.  So... yeah.  But, in general, Jamie, SimonUK (who loves Bond the way I love Superman), and Jake all liked the movie okay.  Well, not Jake.  He fell asleep.  Long day for Jake.

You guys likely know I'm a fan of Daniel Craig as Bond and the current take on the franchise.


I was a little shaky on whether I'd stick with Bond during the Brosnan era.  No fault of Brosnan's, but the movies were getting a bit silly, so I've liked the harder edge to the franchise.  That said, I'm not sure this movie feels as weighty as the prior three installments that were intended to relaunch the character.  Not a complaint.  While I don't need for Bond to feel like drudgery, and enjoyed the lighter touch this go round, I also don't want to make it sound like the movie is as flip as the Roger Moore era, but it does go in for some pretty good character-based and situational laughs.

The cast for the movie is fairly solid, especially that Mi6 crew.  While you can't help but miss Judi Dench's conflicted, smartest-kid-in-the-room take on M, Ralph Fiennes does a pretty solid job of continuing the character developed during Skyfall.  Our Q gets a smidge of field work, and Moneypenny's role is blown up larger than that of the secretary it sounded like she'd agreed to become at the end of the last film.

Our villains include Dave Bautista who you know as Drax from Guardians of the Galaxy in a Robert Shaw in From Russia With Love-type role, and Christopher Waltz again managing to seem over the top without chewing the scenery as the shadowy head of the shadow organization known as Spectre.

With Skyfall behind us, this Bond feels like the closest bridge to the tropes you think of in a Bond film, but attaching them all to the more insular story that's been woven since Casino Royale.  This is Bond with continuity.  When Vesper is mentioned, (a) she actually gets a mention, which was always a rule-breaker before for Bond flicks, and (b) Bond actually has a reaction of sorts.  The heavy wound of the first two films is still there.  And, in his way, he's still mourning M.

But it's also a Bond with a cool spy car (oh my god, is it a beautiful vehicle), gadgets, and I am reminded of a line in the book Farewell, My Lovely by Raymond Chandler were he describes the sort of women he's interested in: “I like smooth shiny girls, hardboiled and loaded with sin.” And, here, we have the stunning Monica Bellucci not really getting nearly enough screentime and the main Bond-girl played by Lea Seydoux, whom you might recall from The Grand Budapest Hotel.

There are terrific action sequences, including some creative uses of multiple forms of transportation, some crazy punch-ups and terrific camerawork following all the action.  Really, if you're looking for solid, Bond-ian action, the movie delivers.

It also reckons with the fact that, basically, James Bond is one of England's hitmen.  I don't know that that folks think about this a lot from the movies.  I don't.  But, yeah, it's kind of true.  In a much more ham-handed fashion, the movie also reckons with the problems with large-scale electronic snooping, and I'll let my colleagues in IT roll their eyes through that one (and I think we can expect information to be to the 2010's in action movies as oil/energy was in the 80's and 90's).

The biggest issue the movie struggles with is really the fact that I think there are six writers listed, and you can feel the various drafts in conflict with one another.  And, of course, the sealed-system storytelling where everything ties together.  I'll let you guys sort that one out and we can discuss later.

Anyway, it's a fun movie.  Maybe not the shot to the system of Casino Royale was, but I didn't sort of groan my way through it as I do during the poorer Bond movies.  I'd have liked a bit more here, and bit less there, but all in all, it's a good one to take mom and dad to see and all the folks in your party who are into Bond Girls can agree not to talk about them until the coast is clear.
Posted by The League at 11/06/2015 12:26:00 AM

Well, Casino Royale had book source material, and these others...yeah. That, to me, was why it was so fantastic and so revitalizing. I often refer to the Bond flicks before Daniel Craig as a completely different entity because while they use names and such, they follow the storylines very loosely.

I was so hoping after the flop that was Quantum of Solace that they would return to the books. Alas, it was not to be.

That said, Skyfall was a big improvement over QoS, and I'm super pumped about Spectre. I won't go this weekend because packed cinemas are the worst, but I will be seeing it at least once.

Thanks for a little peek inside.

Finally was able to watch this movie while on a work trip this week. I really loved Casino Royale, not so much QoS but then thought Skyfall was a great show.

I've now debated whether or not to type any spoilers into this comment in my own head for awhile and I'm just going to go ahead and spoil some stuff in this 4 month old movie. Feel free not to approve this comment.

I liked the show but I really felt like it was unnecessary for them to put a personal link between the head of Spectre, played by Christophe Waltz and Bond. It seems odd that this organization who are capable of taking over the world are led by a guy who's got Daddy issues. Geez, if I was Waltz I would have offed Bond long ago. Anyway, it just seemed kinda silly. Although, I now have my favourite new line "It was me James. The author of all your pain". I plan on using that a lot.

I must say I agree with the rest of your comments on this film. It had some great action scenes and I wish somehow that Monica Bellucci was in the movie more.

I was pretty annoyed by the family tie-in as well. Utterly unnecessary for the franchise or for Bond to have a stake in the game. Vesper was plenty, and now that all feels a bit secondary.

And Waltz's mad-on for Bond didn't entirely make sense given Bond didn't actually DO anything to him. It all felt a bit contrived and melodramatic. Not sure what they can even do with that down the road.