Basically, a scientist had a ray that would duplicate anything, but it wasn't working as expected, creating whacked out duplicates of whatever it reproduced.  So, bouncing off Superboy, the ray generated a weird imitation, because, what the hell else were we doing that month?  I don't believe he survived that first adventure, but a new Bizarro was just a power surge through the duplicator ray away.

In Bizarro's subsequent appearances he soon began speaking in a "backwards" Bizarro dialect.  If he liked something, he "hated" it.  If you were his best friend, you were his "worst enemy".  He saw order as chaos and went about trying to fix it (his ideas regarding architecture were downright dangerous).  Caged animals had to be freed.  Beautiful paintings needed to be vandalized to be properly "ugly".

Of course, Bizarro, like Superman, was all alone.  So, in the grown-up world adult-like adventures, Bizarro got his hands on the duplicating ray and, after establishing his own planet by smashing rocks together in space to make a perfect cube (I don't know what the opposite of a sphere is, either), he started duplicating the cast of the Superman comics.  A lot.  Including himself.  If Superman were unique on Earth, on Bizarro World, Bizarro would be one of many Bizarros.  And all of them got a Bizarro Lois and Bizarro Krypto (which led to Bizarro kids, which its best not to think upon too much).

There was a sort of Bizarro Justice League and Bizarro Superman villains like a Bizarro Titano.

But it led to some interesting stuff.  Sometimes the Bizarro logic became so convoluted, you might have Halloween Bizarro's dressed as Mickey Mantle, Jerry Lewis, JFK and Marilyn Monroe* throwing candy at Bizarro kids who, of course, hate candy.


Bizarro the First is clearly marked, above, by his clever labeling scheme:  Bizarro #1.**

I'm a big fan of all that Silver Age stuff, and certainly not just as kitsch.  The writers and artists were continuing to develop new ideas and playing in a world which suddenly had a lot more rules than they'd started with - which was none.  But by the 1950's everyone from pop psychologists to the Catholic Church were saying comics were directly causing juvenile delinquent behavior, and suddenly a huge list of rules was imposed (and we'll get into that again some other day).  The superhero run of the mill story options were now shut off to superhero storytellers.  From those confinements rose a different flavor of energy and creativity, and Bizarro embodies some of the best of that era in comics.

Reading a well-written Bizarro comic is an exercise in patience, and reading a Bizarro collection will leave you feeling tired and somewhat dumber for having done it, but by that, I mean, they make me laugh like a lunatic seeing how far the writers were clearly willing to go.

It's easy to think of Bizarro as a bit like the Frankenstein of the Superman world.  He's big, is confused, lumbers around.  And, hey, it's not like DC didn't milk the Universal Monster boom of the 50's to draw the comparison.

And, through it all, Superman just sort of tries to be patient and help out Bizarro, or, like when that one relative comes over, keep the peace until Bizarro heads home again.

The comics have remained fairly true to the idea of Bizarro, and you can always tell if a writer really knows their Superman by whether or not Bizarro gets an appearance during their run, and, more specifically, how that run is handled.

Bizarro was even an odd fit with the Post-Crisis Superman in the late 1980's, but the concept - although with a new origin, remained intact, but he lost the whole Bizarro World concept.

I don't want to get into every appearance of the character, but he did get some revitalization circa 2001, and that lasted pretty well until the New 52.

Oddly, the only bit of "CosPlay" I've ever done was to attend a Halloween Party/ Nu52 celebration bit at Austin Books.  I think, maybe four people understood what I was up to. 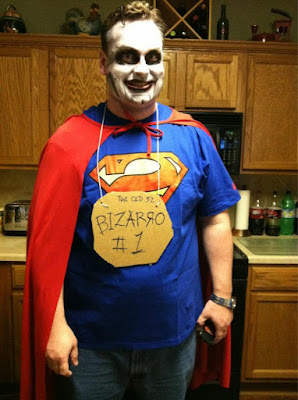 They hadn't actually introduced Bizarro into the books yet at that point, so I was cutting-edge, people.

I did quite like Morrison's take on Bizarro World in All Star Superman, even if it was a far cry from the original character(s), but we did get the unique perspective of Zibarro, an imperfect clone of Bizarro.

On TV, my understanding is that the 1980's Superboy TV show did a pretty straight adaptation.  And, certainly the WB 90's Superman cartoon fully understood Bizarro and just went with it, taking the character right into the Justice League series.  Super Friends heavily featured Bizarro in the Legion of Doom episodes, but he was always just played as Superman's kind of dumb doppleganger.

Oddly, the most important appearance of Bizarro on TV was just a reference to the character in the Seinfeld episode "The Bizarro Jerry" where Elain hangs out with a doppleganger group of guys who are all opposites of their counterparts.

Smallville brought us a version I think we saw echoed in this week's Supergirl.   Once again an imperfect clone, but one that's slowly breaking apart and doesn't have full mental faculties, it seems.  But the version on Supergirl, at least, managed to get positioned as a sympathetic character, something I always think Bizarros must be.  After all, our world makes no sense to them.  We're all topsy turvy, and they're just tyring to make things right.

If the show didn't indulge in Bizarro Speak (and I don't know if Smallville did or not.  The character appeared when I wasn't really watching), it's a bit of a shame.  It's not justa  nod to the comics, it's an essential part of the character as much or moreso than Thor speaking in faux-Shakespeare.

Bizarro acts not just as a foil or prop for Superman to battle - he debuted in an era where violence was missing from DC Comics.  He's sometimes a part of Team Superman, he's a wayward cousin, a lost soul for Superman to look after, and - sometimes - also the last of his kind.

But he's also a writer's toy box, one that generates ideas and gives the reader, as well as the characters, a challenge.  The character can bring tremendous amounts of chaotic fun to a title (even more so than the similarly puzzle-like Mr. Mxyzptlk), playing by his own rules and wired just wrong enough that those angry faces look like adulation to him.  Or, of course, you can play it for pathos, and that works just as well in limited measure.

If Supergirl comes back for more episodes next year and they decide BizarroGirl is part of that, I really hope they consider the BizarroSpeak aspect.  Yeah, it's a little maddening to keep up with, but that's the point, and if 9 year olds in the 1950's could deal with it, so can a TV audience.  Otherwise, she's just sort of a lesser Supergirl, not the endlessly miscast puzzle-piece in the world that makes the character unique in the DC lore.

*let's be glad it was Mantle and not DiMaggio, or we'd have to think too hard about whether or not Bizarro Marilyn was also sleeping with Bizarro Jerry Lewis

Maybe it's time to put poor old Yeller down, though. Reading his stories has become quite a chore, and the stretches writers make to find opposites gets pretty annoying. Bizarro Lois just gasped- spelled psag- and claimed she hated Metazarro Man with all her liver. And with entire issues now devoted to Bizarro World, reading pace slows to a crawl. Hey, this was fine for a guest appearance or two. But when I need to read six comics at lunchtime just to keep up, this is a no-brainer: put this baby to rest. Its time is done.

Incidentally, all of the above is the reason we get Bizarros and aren't Bizarro. Just saying.

Me an in complete agreement. Is time to never see Bizarro again!

I dunno. I thoroughly enjoy a good Bizarro read. I do understand it takes a while, and when I've read a Bizarro collection, I do not read it straight through - you gotta take breaks. And may I recommend reading your comics in the evening so the pressures of the work-a-day world do not limit your Bizarro-tainment?

I do see Bizarro pop up here and there more than I'd expect (I did not read the Red Hood title where he appeared, and thought it odd they decided he could be a team player), and agree less is more. I didn't read the Bizarro mini a few years back because after the first issue, I just didn't care for it. But for the most part, I just don't find "too much Bizarro" a problem for the main Super-titles.