Before Comics Were Cool - Gen-X Recollection Project: Peter from Denmark!

Hey, everyone!  When I sent out the call for your recollections, I didn't expect the second response to appear in my inbox to come from someone I hadn't previously met, let alone someone from the fair land of Denmark!  That's pretty exciting, in my book.  And, to today's contributor, I can only say:  Jeg vil gerne hav en kop kaffe.*

We're collecting the stories of folks born before 1982 or so who grew up on comics, sci-fi and fantasy - back when that was maybe not the coolest thing to do.  There are a lot of different stories out there that defy the stereotypes and show what life was like before the internet and social media - and we want to hear them.

If you'd like to also participate in this grand experiment, please visit the info page we've put together. 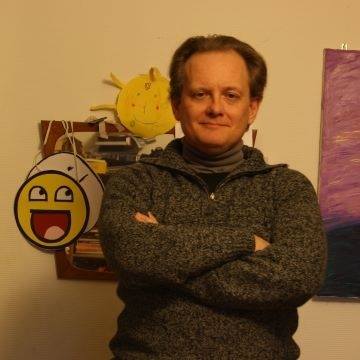 My name is Peter Ravn Rasmussen. I'm an historian, mainly working as a teacher. I live in Copenhagen, Denmark, with my three sons. I am divorced.

I was born in 1965, the child of two people who came from working-class families. By the time I was a small child, my father had managed (despite very little education) to rise quite high in the ranks of one of the world's largest shipping companies, so I grew up in a fairly affluent home. But my parents were not academically inclined, and they were not habitual readers. To a certain extent, this meant that I was a "cuckoo in the nest" -- because I learned to read at a very early age (just before I turned 3). My earliest reading material was Donald Duck comics and, later, Tintin. By the time I was of school age, I was already reading voraciously and at very high speed, which caused some friction with my classmates (some of whom were just beginning to read).

In 1973, my father was asked to relocate to Hong Kong, and (after conferring with us all) accepted. I learned English in short order, and this must have happened at a favourable time, for English became functionally my second native language. It was while I was in Hong Kong that my interest in science fiction and fantasy, and comics (and all the other trappings of geekery) first began to grow. I watched classic 1950s and 1960s sci-fi movies on TV, I read superhero comics, and I came across some of the first science fiction books that I can remember reading. In particular, I remember reading many of Heinlein's juveniles, including "Farmer of Ganymede" and "Tunnel in the Sky", in this period. After a few years, we relocated again, this time to Singapore -- and I continued my exposure to these interests. I watched "Star Trek" (both the original series and the animated series), and I remember buying many of the Star Trek-themed Meco 8-inch dolls (this was before the term "action figure" had become common) to play with.

Why did this affect me so much? I have no idea. Perhaps it was the sense of limitlessness of science fiction and fantasy, contrary to other genres. But I was hardly restricted to SF/F, I read plenty of other stuff. I just tended to prefer SF/F.

When I returned to Denmark in 1976, I was very much an outsider. I had been an outsider as a proto-geek in HK and Singapore, but returning from abroad only made this worse, because I was now also culturally different from my peer group. I was bullied quite a lot. As I understand it, many people who experience this try to hide their nerdiness from others, keeping a low profile. This was not my way. I stood out, quite determinedly, and the consequences were unpleasant. On the other hand, as an adult, I can definitely feel satisfaction with my decision not to back down and deny my nature.

Comics and SF/F books (and TV) were readily available in Hong Kong and Singapore. In Denmark, not quite so much -- but the library had some books, and there was a small fandom scene with some prolific writers (most notably Niels E. Nielsen). I soon discovered that there was a bookstore in Copenhagen (about 50 km from Roskilde, where I lived at the time), called "Fantask", which sold everything I needed: SF/F and comics and all kinds of stuff. I became a regular customer there, and I soon got into gaming as well. Around 1979, I first came across the role-playing game "Traveller", and started playing it with friends. Later, I would write material for "Traveller" (and I am credited for this in the later editions). So, by the early 1980s, I was pursuing the whole gamut of nerd interests: SF/F books, comics, tabletop gaming, and later computer games.

As I mentioned earlier, my parents and I were very different. I have a younger brother, and I did drag him into my interests -- but in the long run, he grew up to be a "mundane" like my parents. So yes, I was a "cuckoo in the nest". It can't have been easy for them. They read maybe a book or two a year (if that many), whereas I would read 5-6 books in a week. In fact, I remember one summer when I had a 7-week school vacation, and I spent some money I had received as a gift, buying 49 books (one for each day). Then I kind of just went into my room for two weeks and came out, having read them all. Predictable for anyone who knew me, but it must have been very hard to comprehend, for my parents. But they never, ever, failed to support me in everything I did. They didn't understand my interests, and they certainly didn't share them -- but they accepted them.

Initially, I didn't have friends who shared my interests. My brother, perhaps, but only to the extent that they had rubbed off a bit on him. But by the time I was in my mid-teens, I had made friends in Danish SF/F fandom and gaming circles (some of whom I still hang out with today), and I spent a lot of time with them. Again, my parents were very supportive of this -- even though it meant that I was spending a lot of my time with grown-ups, instead of other teens. That must have seemed strange to them, but they never failed to support it.

The vast majority of science fiction and fantasy available when I was growing up featured protagonists who were straight, white and male (much like myself). In my early years, this probably helped me to identify with the protagonists, but as my reading grew more sophisticated, I was also exposed to protagonists (and likeable secondary characters) who were very different from me in every way. I can't say for sure whether this taught me to be inclusive and not to discriminate, or whether this was the result of other factors in my upbringing -- but I tend to think that the general openmindedness of the material that I read helped to shape an open mind in me, the reader. I remember once talking with a good friend who refused to read any book which didn't feature a male character he could identify with, and I found this attitude to be self-defeating. After all, why read if you don't plan to let what you read change you in the slightest way? To me, the act of reading about a protagonist who is different from me helps to enlarge my worldview.

The image of nerds as developmentally stunted outsiders has always been present, but I feel that it has also been somewhat overplayed in the media -- I don't feel that it was quite that strongly present in real life. Yes, as a nerd, I was an outsider -- but not to the extent of being a complete pariah. Yes, I have encountered people who found it hard to accept, but I have generally worked around their mental limitations, by playing to our common interests -- or by simply ignoring them as irrelevant.

I can't really say that my romantic life has been affected, one way or the other, by my nerdy interests -- except to the extent that nerdiness has always been a part of my life, and any girlfriends I had would have to accommodate my interests (but then, this is no different from any other relationship). I have had some very nerdy girlfriends, and some very mundane ones, and all shades in between. The mother of my children was very much a mundane person, with fairly little interest in nerdy stuff, but my nerdy interests were not why we split apart (fortunately -- because all my three sons are nerdy, to some extent, and she would otherwise have a hard time dealing with that).

I think, perhaps, the most important aspect of being a nerd is an all-consuming curiosity. If there is one thing that defines the nerd, it is the desire to "hear the story", to dive furtheer into understanding of something new. This is a mindset that, obviously, goes very far beyond comics or SF/F, which is why you'll find plenty of fans of these genres/media in the academic field. As an historian, I bring my nerdiness to bear on my work, consumed by a desire to delve further into it. Really, being a nerd isn't all that different from being normal. We just never grew up to the point where we felt we had nothing more to learn.

Would I change anything, if I could go back and be "normal"? Of course not! It's been a fun ride, all the way.


Thanks again so much to Peter!  This has been truly eye-opening and a really great read.  Now I'm wondering what happened to me Traveller set.    If y'all have questions for Peter, put them in the comments.

"If there is one thing that defines the nerd, it is the desire to 'hear the story', to dive further into understanding of something new."

Totally agree with this. Science fiction, though it often has little to do with real science, is still aptly-named, because of its mission to explore and tinker with our preconceptions. What if everything you know about human nature was the same... except for THIS THING. What could we learn about ourselves then? It's like an experiment in perception.

That's a large part of what drove my interest. My favorite storytellers were implicitly saying that we don't have to accept reality the way it's presented. Things could be darker or weirder or just different and off-kilter. Things could be better. Let's imagine it together, and maybe that small act of rebellion and curiosity will help bring about the change.