DC Comics details #DCRebirth, we look at Superman and... So many questions (not necessarily in a good way)

Over the weekend at something called WonderCon, DC Comics used the Comic Convention platform to do what they used to do back before videogames and movies gentrified CCI/ San Diego - they actually delivered some fairly large comics news.

It's no secret to retailers or readers that DC Comics' line of titles has been in a creative hole of despair for going on 5 years, and sales have taken a related major nose-dive in the past two years despite incentive covers and as much Harley Quinn as DC could print.  The ill-conceived Convergence event of Summer 2015 gave anyone on the fence the opportunity to get the hell out of there, and, abandon DC they did.

It wasn't too hard to figure that after DC moved to the new West Coast offices many things would change, that the real-world stresses of moving would put any ability to react to sales issues on the back burner, but, once everyone was settled, they'd immediately begin planning.

The final product of a few months of brian-storming is now revealed:  DC Comics Rebirth.

So, what is Rebirth?

What Geoff Johns and Jim Lee swore would be a revitalization of the DCU appears to just be what Marvel has been doing to ill effect the past five years.*  It's a bunch of new #1's and one-shots, all more or less just continuing what we already had in place with minor changes in most spots.  There are maybe some changes to continuity or something.  But that's still the New 52.  Maybe.  I dunno.  It feels like a lot of half-measures.

What's odd is that DC seems to believe that Rebirth would restore lapsed readers, but made no changes other than cosmetic changes to costumes, certainly not in the editorial leadership, which seems to be increasingly locked in a bunker mentality, appearing at Cons like Funky Flashman but with zero charisma and less confidence.

Like Marvel of the past five years, DC loves to play musical chairs with writers on books, and as the music stopped with the Rebirth announcement, a bunch of creative teams were announced. 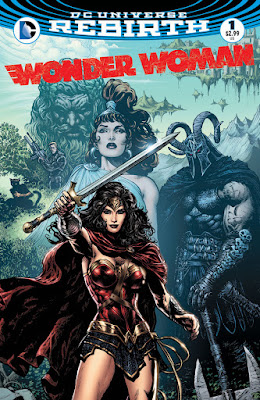 It's not Marvel-level recruitment of talent, but it's a step away from "we hired this artist's cousin to write!" nor does it seem "we can really push this kid around!".  And, most importantly, it isn't Scott Lobdell.

We got some name talent back.  Greg Rucka, one of the finest WW writers of the past 40 years, is on that title, at the helm to bring back all the readers Diana lost once the Finches took on the character, obliterating Azzarello's goodwill.

Dan Jurgens, who had been surprisingly positive about Batman v. Superman on twitter, is on a Superman title or two, no doubt to bring back the success he had in the 90's and with the Lois and Clark mini-series that was the world's most obvious test balloon (and, perhaps, we will not see the fate doled out to George Perez when he tried to help out by relaunching Superman in the New 52 - broad re-writes and strangling of ideas in the crib).

They've landed Peter Tomasi for a Superman title, so that's promising.  He's a solid craftsman, as are some other name talent on core titles.


Looking hardest at the Superman line, I think you can already spot the book that gets 8 issues and vanishes in The Super Man, an all-new character that doesn't seem to have much set-up other than DC dreamed it up (and written by a guy I'm not sure has quite landed the super-hero book yet).  I'll certainly hold off on "Super Sons", as... well.  Let's see.  A Phil Jimenez drawn Superwoman book is...  well, you can't go wrong with Jimenez on pencils and I think he's a strong writer, but it's impossible to know what that book is quite yet, but it doesn't matter for some time to come as Superwoman is in the August batch of books.  And, we're getting a new Supergirl title that seems to harken back to better days with the character and reflect at least the character's look on the CBS show.

What's most, frankly, irritating, is that it looks like DC has admitted that the Superman readership really never took to the New 52 Superman, both costume and persona, but rather than just live with it and fix it - they're meeting somewhere in the middle.  But with the usual half-assed approach they took failing to support Superman during Busiek's One Year Later run, and then during The New 52.

It can't hurt to have someone like Jurgens bringing the character back to his core and core audience.  The married Superman and Lois of pre-Flashpoint, who were bounced around in Convergence and then in the Lois and Clark mini series, seem to be (seem.  I'm not sure.) the new Superman and Lois of the New 52 Earth.  It's the Superman you love, somehow crammed into a world that for 6 years has seen a different Superman.  Which, as a pre-New 52 Superman fan I find incredibly vexing, and from a storytelling perspective - just puzzling.  For as many knots as DC created with their shoddily rolled out New 52, trying to cram a Superman from another dimension into a story midstream, doubling up the alien-ness, is going to take years to fix.

Is this how far we have to bend in order to make everyone in editorial happy, have their cake and eat it, too?  It feels like more of a mess than explainingg Supergirl during the whole "Earth Angel"/ Matrix business.

I'm not the only one baffled.  The comment section at the Superman Homepage was basically just filled with lots of question marks in the Rebirth announcement post.

I won't complain about DC trying to get it's house in order.  Things have been... well...  less than ideal when it came to their Superman-related output for some time.  And, you could exceed your daily recommended allowance for Irony that the weekend DC puts out a grim'n'gritty Superman movie, the comics announce they're stepping away from that same portrayal (which actually makes me wonder what internal conversations DC Entertainment has been having about the character internally since the rough cuts of this movie started circulating and sales of the comics fell off).

But at this moment, despite some blurbs online, I can't tell if we only have pre-Flashpoint Superman or if we have two Supermans (which seems... problematic), or what the heck is happening.  But, at least, even if we have no red shorts, we've said good-bye to the armor, collar and tossled Jim Lee hair.

My gravest concern is that DC is still tweaking the idea at this point, just as they tweaked the New 52 right up to the point of the comics getting printed (and then afterward).  After all, this is the same crew of people who brought you The New 52.  It's like expecting that friend who can't show up on time to any event to actually show some responsibility this time.

I'll be honest - I'll check out what DC is doing with the two main Superman titles, and I'll certainly want to pick up Supergirl and Superwoman (and if you think I'm skipping Greg Rucka on Wonder Woman...  well, get to know me!  I am not.).  Depending on reviews, I may pick up a trade of The Super Man.  And, yes, I'd like a solid Justice League title again, because I haven't read Justice League since issue 6 of the current series.

DC will get it's little spike in sales, and that'll delay some inevitable and much needed change.  They're putting out two issues per month of core character titles, which makes just waiting for th trade all that more attractive, really.

They still have major structural issues.  The top-down approach to editing and insisting on keeping around folks who seem to be more of a drag on the system than anything (cough.  Berganza.  cough.), and decision to go cheap on talent and ensure they had talent they could push around is clearlya  problem.  I like Jurgens well enough, but it seems like there should have been talent coming up out of Vertigo as in days of yore.  Or, some talent with something new to say about Superman.

DC recently announced writing workshops as a sort of talent search, and it's a good idea, but it also stinks of either an exploitative cash grab by DC looking to eLearning as a revenue stream, or that smell is desperation as they realize the crop of writers they're getting... can't.  There's no Karen Berger shepherding wild new talent through Vertigo for DC and Marvel to harvest from.

*I admit to having a very, very hard time just keeping up with Captain America, the only Marvel I read regularly.  I buy in trades, and I never know if this Vol. 1 is a new one or not or what issues its collecting.

Nothing I saw in the Rebirth announcement makes me want to start collecting DC Comics again. The Rucka on WW is kinda interesting but I'll trade wait the heck out of that one from the library.

yeah. Throw in the fact it's on a semi-monthly schedule, and now you're just waiting 3 months between 6 issue trades - unless those comics are 12 pages a piece - which... DC! There's no stopping them now!

Protecting people guilty of not just sexual harassment, but sexual ASSAULT? Thanks but no thanks DC. I'M DONE. Fire Johns, Didio, Lee, & Harras, and then maybe we'll talk.