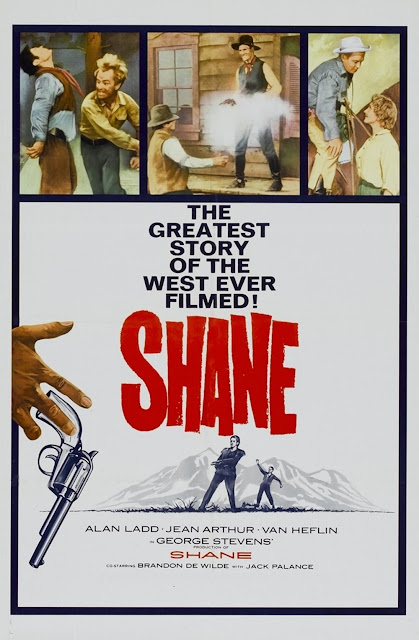 I hadn't watched Shane (1953) in more than a decade.  Even the DVD I have is clearly a relic from the beginning of the DVD era.  If I hadn't watched the movie in a while, it seems that Jamie does not care for Shane, and that's one of those things that you're going to have to endure if you want to stay married.

For my dollar, Shane is one of the great westerns, one of those stories of the expansion into the west and foretelling other great Western stories that explore the nature and fate of the gun-fighter like The Unforgiven,  Beyond the loose definition of the Western genre, it's also, simply, a great film.  Beautifully shot, well-acted, nuanced and better than you likely remember.

Contextually, the book the movie was based on and faithfully adapted from (and which JAL and I read in class in 7th grade if memory serves) was released in 1949, four years after the closing of WWII.  That the book was told in a first-person perspective from the eyes of a child and the movie mostly retains that POV, makes sense.  At it's heart, the story speaks to the naivete of what we see when we look at violence as an heroic act, of putting the gunman on a pedestal - as both writers of Western novels and Hollywood have always done.  In 1949 and 1953, one can imagine all the GI's returning from WWII who had to endure the questions of both the folks who had seen the war from newsreels and kids who saw it as a comic-book adventure against cartoonish Japs and Krauts.


Shane (Alan Ladd) rides onto the Starrett homestead, commenting how surprised he is to see a fence out here in the wilds of the west (shot outside of both Jackson Hole, Wyoming and in Big Bear in California, the movie never quite states where the action takes place, though it feels like it might be Wyoming).  Starrett (Van Heflin) might know him for what he is, a gun on his belt and rugged, alone.  Starrett mistakes Shane for a part of Ryker's crew, running cattle on the open range of the late 19th Century and hellbent on getting rid of "squatters" putting up with farms, the ranchers who've been there for a generation or so wanting to continue to graze freely, the land theirs by default (a confllict still feeling echoes in the recent armed stand-off with the Bundy's in occupation of a National Park in Oregon).

Rather than being a part of Ryker's crew, Shane backs up Starrett and earns himself a job on the farm, one not requiring a gun.  We're told what the farm means to the settlers, what they'll do on the land, and how it will give their families a chance in the world - a bit of the American dream.

However, Starrett's young son is fascinated by the six-shooter Shane has put away and asks to be taught to shoot.  Curiously, Joey is portrayed as not particularly precocious, but perhaps more like a real 8-year-old boy with single-minded interest not on farming, but on the life of adventure he's certain Shane has brought to his house.

Much attention is paid to the work needed to form a stable home and hearth, of honest work, and while not outright saying so, acknowledging that it's unsexy, if dignified.  And it's the stability of that family unit that the drifter Shane seems drawn to.

Yet there's a curious bit in the movie that comes from passages in the book but is, here, made a bit more dangerous.  There's an unspoken and clear sexual tension between Shane and Mrs. Starrett (played by Jean Arthur).  It's a bit unusual for a movie of this era to go down this path if it doesn't star Fred MacMurray as an insurance salesman.  It's never overt - I'm not sure kids in the audience would get it, exactly, just as Joey doesn't quite pick up on it, or even Starrett himself.  It's just a strangely subversive bit in the movie, understanding Mrs. Starrett as a person with her own desires, and, you know, relaying to us the animal magnetism that is Alan Ladd.

We don't hear Shane express what he's found in the Starrett household, but he is ready to put away his guns, and whatever came before this moment, he's not  quick to discuss.

But Shane's arrival means that the homesteaders have a fighter among them, and that sets Ryker off to hire a gunfighter out of Cheyenne (Jack Palance in one of his most famous parts, despite the fact I think he has eight lines in the whole movie).

There's a whole lot going on in this film, and to watch it again after so many years, I feel like, once again, I got even more out of the picture.  Particularly when I've had conversation after conversation with people of an age when they were never raised with the idea of "the hero", simply the "anti-hero", enough so that there is no differentiation between the two for these viewers.  They've been raised on a steady diet of how Batman is "better" because he's "conflicted"*, "dark" and "brooding".  These are seen as a checklist of positive qualities, and if videogames have taught us anything, its that all problems are better solved by dispatching anyone in the path of our mission with cruel efficiency.  Which, of course, takes us back to a Batman v. Superman movie where Batman racks up a huge bodycount and Superman is okay with devastating civilian casualties so long as he gets that one guy.

Shane gets one scene in which to relay his take on violence, on guns, and it's hard to argue.  He sees guns as a tool, same as an axe or spade.  As good or bad as the man behind them.  But he doesn't relish the violence, at least not anymore.  But the farmers see violence as a last resort at best and unthinkable at worst.  And the first of them to raise a gun doesn't live to regret it.

It's also just as hard to argue with Mrs. Starrett's vision for a valley where there are no guns and they can go about the business of living.  It's the passing of the razor edge that may have made paths into the West, but for families to settle there and make lives worth living, the violence needs to be behind them.

The movie is 63 years old, so I don't mind mentioning that in the film's conclusion, of course Shane wins the day by ensuring Starrett can't be there to face off with Ryker.  And, as was inevitable as Shane knew when he put back on his buckskin riding suit before setting out, he can't be a murderer and remain a part of a family.  He has to move on.  The era of gunslingers and free range cattle is closing.

We don't even know if Shane survives beyond his ride out of town.  I'd think not.  It may not matter, because he's the man he is, and sooner or later a bullet would get him.

Joey, of course, is ready to have him back home, but he's a gun in the valley and he needs to move on.

There's a lot more to Shane, likely a few ten thousand words or more so, but I'd just recommend finally watching it if you have not yet done so.

The ending of this movie always gets to me.

Yeah. Especially since, on this viewing, I decided Shane was either about dead or dead when Joey was yelling to him. It's a hell of a way to wrap up a movie.