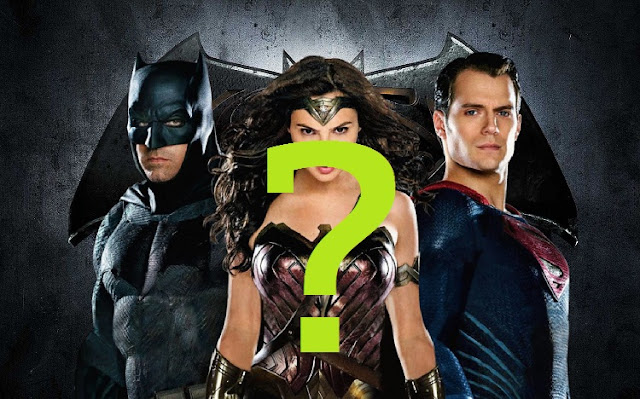 
3a.  Why, if you have the mother of Superman of all people, would you bring her to the greater Gotham/ Metropolis area?  You picked her up in Nowheresville, Kansas.  Why, in 2016, with cell phones, wouldn't you take her to literally any other place than the two places Superman knows pretty well?

3b.  Why, in the warehouse where the guy had Martha held, did he have, like 25 guys with him?  A) that seems expensive and B) like a surefire way for someone to blab.  But 25 guys with machineguns are not going to stop a motivated Superman.  So, why were all the guys there except to make it look awesome when Batman fought all those dudes?

4.  Why doesn't Superman just say to Batman "I'm not going to fight you.  I'm here because Lex Luthor has a hostage and he made me come over here.  He wants for me to kill you to get the hostage back."  Batman may not think highly of Superman, but there's no concept of Superman as an actual liar in the film.

5.  Yes, I also thought 18 months was pretty quick for a whole park to be built, complete with a Superman-shaped sculpture - which would have been controversial, at best.

6.  What was going on with Perry constantly bitching about the state of journalism but then insisting on puff pieces?

7.  So, for absolutely no reason, Lex lets Mercy get killed during his Capitol explosion?

8.  What, exactly, does it say about the mindset at WB that they created a scene where a US Senator finds a surprise jar of piss terrifying - a jar of piss apparently nobody, even Superman, can smell - and why was the Senator so weirded out?  It's called politics, and one would assume she knew this, at most, meant just doing some handwaving and/ or just telling the truth.  Ie:  "I did not trust Lex Luthor, and therefore did not authorize him to do jack nor shit.  We are seeking other options."  None of this seemed that complicated.

9.  I don't even know how or why I should consider how Batman sorted through all of Lex's data in his data center to pull not just the White Portugese data, but the amazingly relevant Metahuman data as well.  This just feels like the laziest writing possible.

1a. Batman recognized the goons from other cases/stake outs, so knew they were Bad Guys.

1b. Superman's attention was elsewhere and he didn't notice the preceding carnage, OR he was paying SUPER attention and (using super senses) verfied the vital signs of all those guys who only appeared to be blown up.

2. We know the ship speaks English from Man of Steel, as this was how the avatar of Jor-El spoke to Clark. As to the security protocols, maybe Kryptonians are too trusting? (They are a failed civilization after all.)

3b. This is an obvious overbilling scheme on the part of the hired thugs. When your client is a billionaire, you bring a 25-man crew when one or two will do because he'll pay either way.

4. memory's kind of fuzzy, but I came away with the impression that Batman kept interrupting Superman when he tried to say reasoning-with-you kind of stuff.

1b. But wouldn't Superman still know Batman was not an authorized agent of the law and know Batman just murdered people in the eyes of the law? I don't know how - if he was looking for Batman (and in the preceding shots, Batman was pursuing the van with the Kryptonite), he missed all the dead guys.

4. Batman sorta did, but Superman also could have just shouted his answer at Batman. It seemed like Superman kept going on and on with a preamble to saying anything useful. Also, Batman was down about 5 times during that fight, and Superman could have said something during any of those moments.

1a. Batman is not supposed to be operating on all cylinders, right? When we encounter him, he's kind of jaded and worn down, and it's supposed to be the events of the film that put him back on a path to redemption, etc. So, I'm not saying that his behavior is defensible. But I think that was kind of the point.

1b. Absent the appearance of actual dead bodies, I can leave the question of whether they were actually killed as ambiguous. The terrorist Superman flew through a wall would've had a broken neck by any reasonable application of the laws of physics, but superhero stories generally get a pass on that kind of thing.

4. I'm willing to give them a little room on setting up a fight between Batman and Superman. It always pretty much shakes out the same way. There's some kind of misunderstanding, Batman's underestimated, etc. I'm not saying it's good; I'm just saying it works about as well as it usually does in the comics.

1a + b. Your point about Batman more or less just being a crazy guy who beats on people by this movie (I assume that's what you mean) is well taken. It's certainly a valid approach to a latter-era Batman, and not one I took any issues with.

I guess I'm more concerned with Superman's reaction than I am Batman's in this case. It seems infeasible that Superman - who interrupts a car chase - was unaware of what was happening. And, yeah, I saw occupied vehicles explode during that chase, sometimes after flipping. If any of those guys were alive, they were going to be on respirators. And, I disagree about seeing the actual dead bodies. That was the same argument used by folks claiming somehow no one died in "Man of Steel" and the entire second movie was about the dead people Superman made. Both are PG-13 movies. They're not going to show corpses, especially under Snyder's direction where it's all about what the protagonists are doing that's cool-looking.

If we ARE concerned with Batman (as it seems anyone in Gotham should be), and you're moving things legally or otherwise, why not do it during the day? I guess to avoid traffic snarls. I don't want to nitpick this to death, but it's played as a scene of Batman "busting criminals", but he's just interrupting a legal transfer of goods, which, you know... WHO IS THE BAD GUY NOW, BATMAN?

I don't actually disagree with you about the guy's neck in the Lois-hostage sequence. Short of Superman grabbing him and cradling his head and neck, he would have snapped it against the wall, or his lower spine. That's the problem with DC deciding to try and be "real". The goal posts kept moving as to what we were supposed to accept.

4. Yeah, believe me, I know. And I usually think it works like garbage in comics, too. After mind-control, it's my least favorite comics trope.