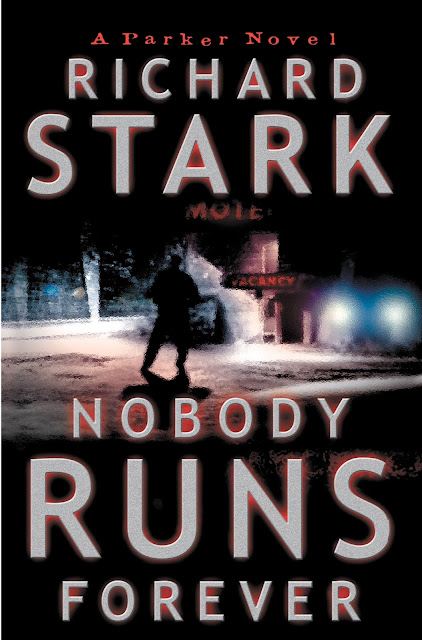 My mistake - packing for our Seattle trip, I just reached onto my shelf and grabbed this book without checking the reading order.  So, after reading 24 of the Parker/ Grofield novels, I finally accidentally read one out of order.

Mostly with Parker novels, it doesn't matter, they're self-contained.  But of course, after 24 of these things (if you count both Parker and Grofield books, and I do), this one ends on a cliffhanger.  I kind of want to know what happens next rather than go back and read Breakout, the one I accidentally skipped.  So, we'll see.

But we're here to talk Nobody Runs Forever, the 2004 Parker novel by Richard Stark.

Of the post-hiatus Parker novels, this one has Parker feeling, perhaps, the most like Parker again, even if much of what occurs around Parker feels less like an old-school Parker strategy session and execution of a heist and, instead, Stark spends his page count and energies on exploring the cast of misfits around the heist, seeming to want to explore new characters he introduces, possibly for a spin-off series.

After 25 or however many of these books, plus all his work as Donald Westlake, I can hardly blame Stark for being more interested in the characters than the mechanics of the operation, but the detailed project management and scheming that marked the books up to a certain point, the deadly precision and sense of tension all that provided, is dropped for plans relying on simplicity and brute force.  It's not exactly anti-climactic, but it is a different sort of book at this point.

As I understand it, Stark's "Dortmunder" books, written under his actual name of Donald Westlake, are more shaggy dog, comedic takes on heists - the sort of stuff that made it's way into just a ton of movies back when George Clooney was hiding in trunks with Jennifer Lopez, or 2002's Big Trouble.  Colorful characters, lots of losers, the chance to make it rich always just out of reach and a hip score.  While Parker remains Parker, he's practically a background character in this book - the professional putting up with everyone else - as Stark seems fascinated with the extended cast.

A bank in small-town Massachusetts is being sold to a larger corporate bank, and the daughter of the bank's founder wants a cut of the cash to get away from her drip of a husband.   She enlists an ex-lover/ ex-con, the former head of security who was also skimming from the bank.  He got caught at both and did some time.  Now he's an assistant manager at a motel, but gets involved when his old girlfriend wants him to help her steal the money, so he enlists Nick Dalesia, who - not wanting the take to get broken up into too many slices, enlists Parker - because who else would he need to pull the caper?

Both Nick and Parker are looking for work after their prior job didn't go.  At the meet, Parker notices one of the guys wearing a wire, and makes short work of him.

As Parker and Nick work on the new job, trying to figure whether the boyfriend, Jack, is going to trip them up, and they're almost certain the wife/ daughter, Elaine, will cause issues.  Jack winds up in the hospital, which draws in a nosey sister.  Meanwhile, a sexy cop is on the trail, and a bounty hunter takes an interest in where our wired weasel has gone.

In prior Parker novels, it's not too hard to imagine Parker dealing with these characters one way or another to ensure the success of the heist.  In fact, U of Chicago Press, who have re-published a great majority of the Parker novels, put out a list of Parker's rules, and this is the kind of stuff that Stark has tossed out the window for Parker by this point.

It's not a ton of rules, but it does show that Stark's on a different page by this point.

It seems almost incongruous to what we know about Parker. Even when some of the violence occurs, it feels more ironic than anything.

All in all, yeah, I liked the book well enough.  It is what it is  - a quick, enjoyable read, but not the stuff that earned Stark his reputation among Parker fans.  But, in it's way, probably the stuff that would better translate to film or television with colorful characters acting like they're out of central casting but retaining a good level of unpredictability when any of them would go off.  And that may have been Stark's goal.  I couldn't say.

But this book in particular leaves so many dangling threads, I have to assume that the next book will pick them up and carry on.