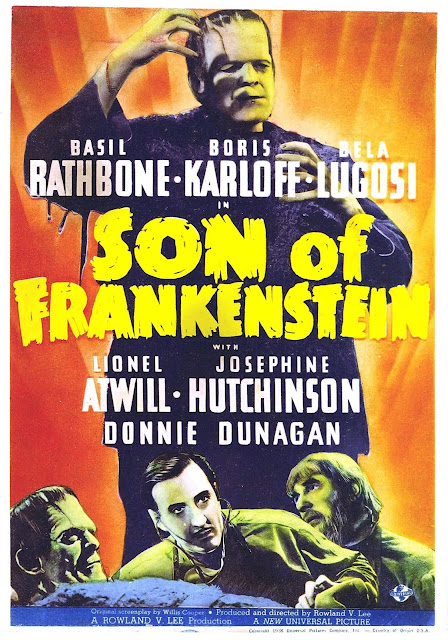 
I've written on this movie before, and I'll mostly just echo what I said way back then.  It's actually beautifully shot with some fantastic set design, great lighting and they really do try to re-enter same emotional place as the prior films, but this Dr. Frankenstein (Basil Rathbone in a slow boil of creeping obsession) isn't the same maniac as his father - at least at first.  He's married with a young son, and he's not a believer of the fairy tales he heard about his long-since-deceased father.

Lugosi plays a near opposite of his suave Dracula in the vile Ygor, a former assistant to the first Dr. Frankenstein, now living in the remains of the lab destroyed at the end of Bride.  He was hung for his grave-robbing to assist Dr. Frankenstein**, his neck broke and he was pronounced dead, but he lived on, left alone by the populace as they've all agreed that he's already legally dead.   And, he looks seriously and oddly-believably gross. 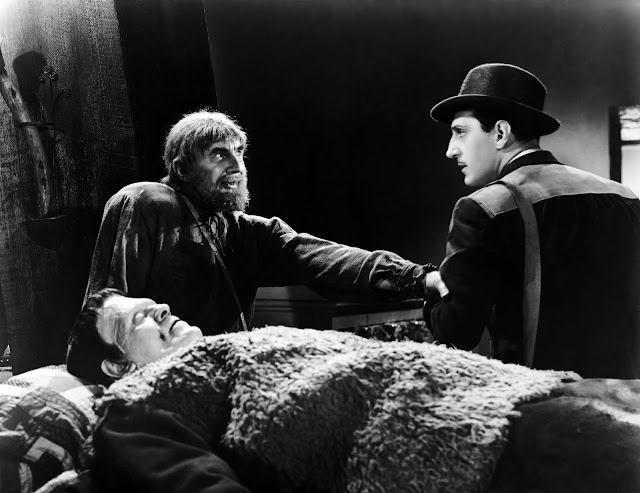 The movie re-uses some actors from prior movies, but plays loose and fast with everything from the geography and timeline of the original two films to making up Ygor's participation (both of Dwight Frye's characters die in the first two films).

The grandson of Henry Frankenstein appears in this movie in the form of Peter von Frankenstein, a cute little kid who's surprisingly non-annoying in a role that should have been twee and distracting.  But, somehow the movie makes the character work (and he's pretty funny).

What keeps me from ever giving a straight recommendation on this film, however, is that the last third of the movie just feels messy.  Which is odd as the first 2/3rds is really pretty solid and Rathbone turns in a fantastic performance as he slides into his father's paranoid madness, leading to some phenomenal scenes with the Inspector (the one armed inspiration for Young Frankenstein's Inspector Kemp), including the darts interrogation scene.

Still, a fun movie, even if the horror of the movie seems to live far more with Lugosi' Ygor than with anyone else.  It feels far more like a thriller, making you wonder how this tangle will resolve itself more than the weirdness of the prior installments.  Really, if you've seen Young Frankenstein a few times, I have to recommend this one just so you can see what Brooks and Wilder were riffing on.

*although the more legit questions is why Dr. Frankenstein put the monster in a blazer to begin with
**it should be noted that cadavers and bodies as obtained by the medical profession in legitimate fashion is a fairly new phenomenon as of the early 20th Century.  Prior to that, bodies were obtained by all sorts of shady means and medical colleges paid well for those bodies.  It led to some less-than-ethical practices in the real world.
Posted by The League at 10/16/2016 11:51:00 PM

My boys and I just finished watching all three Karloff Frankenstein movies, so I'm glad you reviewed this. I was curious to know what you thought of it. Last year, I watched the original Frankenstein and Bride of Frankenstein all the way through for the first time. As a kid, I always thought Frankenstein was the least scary or interesting of the Universal monsters, so I was surprised how much I enjoyed them, especially my first viewing of 'Son of Frankenstein.' And I enjoyed it even more watching it again. It might be the most underrated of the classic universal horror films.

Despite how different they are, I found I liked this movie as much or more than the first two; perhaps because it's more like modern movies I'm used to. It seems like Whale is more of a visual filmmaker (or storyteller). So much of the first two movies is the mood and atmosphere, along with Karloff's performance. It seemed like Whale included more tight shots of the monster, and really let Karloff's performance, whether he was silent in the first film or speaking in 'Bride,' carry the film.

In contrast, 'Son' was driven by its script, which I'll bet was twice as thick as either of the first two films. It seems like the dialogue and narrative drive the film to a much a greater degree, which is why the movie is so watchable, but it definitely suffers because Karloff's performance is not really a centerpiece of the film. I think the script is also why the supporting characters in 'Son' are more substantial, at least in my opinion.

Also, Lugosi is very good. He tends to dominate every scene he's in. To clarify, (1) is Ygor supposed to be Dr. Frankenstein's assistant from the first film? As I recall, his name was Fritz, which really surprised me -- I always thought that was Ygor. (2) Was there an Ygor-like character in the 'Bride?' I'm pretty sure Dwight Frye's character (Karl?) was a crony for Dr. Pretorius.

From what I've read - you're dead on. Whale was an actor, a director and a set designer. He came out of the tradition of stage. It's also really important to remember - Frankenstein was only 2-3 years after the end of the silent era, so you get a real collision of styles.

"Son of Frankenstein" really does pull back to a large use of The American Shot https://en.wikipedia.org/wiki/American_shot Interesting you picked up on that - because I think it's a sign of the workman-like mentality that went into Son of Frankenstein versus the tonal exploration of the first two films. It IS more like modern film in many ways - and I agree it's script was likely much denser, but I'm not sure you get more out of the characters in Son of.

My two great pleasures of Son of are Basil Rathbone's dart-throwing sequence and everything about Lugosi. And, yeah, I have no idea who Ygor is supposed to be aside from Fritz. If he was Karl, Karl gets pitched off the castle in Bride. So, maybe he bounced and had a name change? I think they basically just did whatever they felt like, which... I dunno. But we did get Ygor out of it, and that can't be wrong.