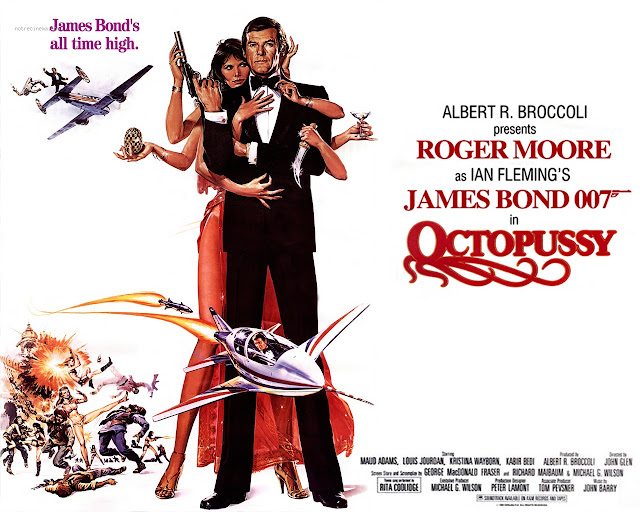 Of all the Bond movies, this is the one I'd argue is the one most made for 13-year-old boys.  It's got James Bond fighting Russians, engaging with a circus, dressing as a clown, gorilla, roustabout and knife-thrower within about 45 minutes of runtime.  There's an all-girl island, a castle escape and a submarine that looks like a crocodile.

Not maybe coincidentally, I think I liked this one a lot more when I was 13 than when I was 41.

And, of course, the lead of the movie is the titular Octopussy (1983), a name sure to drive everyone into peels of uncontrollable giggling.

This isn't, by any stretch, one of the best Bond movies, and it may be one of the least memorable Bond films in general.  It has a couple of good set-pieces, and a few set-pieces that probably sounded better than they were in execution, but mostly the plot is a bit whispy and blandly convoluted.

By this movie, Roger Moore was pushing 60.  He's still a handsome devil with a fine head of hair, but he's not exactly spry.*  The only stunt that the camera doesn't retreat a full football field away to capture is one half-hearted log roll Moore performs toward the film's end.

It also features the triumphant return of Maud Adams to the franchise playing Octopussy herself (yeah, she says her dad called her "Octopussy", which means there's actually a mug with "World's Worst Dad" that can be bestowed with no sense of irony).

The plot is something something a Russian general wants to fight the West so he comes up with a scheme to copy famous Russian artifacts and then sell them on legitimate market...?  Maybe?  And somehow the proud nation of the Soviet Union would not notice their most precious cultural artifacts were becoming paper weights for decadent Westerners?  But he would use the money to fund his war somehow, and to do this, he needed to recruit the shady but ethical jewel smuggler/ circus owner, Octopussy.

When you write it out, man, it really does sound like something generated by a plot algorithm machine.

There's a sort of evil mastermind/middle-man played by the same guy who played Anton Arcane in the two Swamp Thing movies, Louis Jourdan.  Kristina Wayborn plays the femme fatale who falls for Bond (spoiler:  weirdly, she survives the entire movie), and Maud Adams owns a circus and an all-girl island, which makes her sort of Pussy Galore without the sweet riding boots, airplanes or much to do.  The crazy maybe-over-acting Russian is played by Steven Berkoff who is a respected actor, but you'll remember from Beverly Hills Cop and Rambo: First Blood Part II.

As a kid I liked the character "Vijay" who was a tennis buff of some sort, and I just learned that apparently he's a tennis pro in real life named Vijay Amritraj.  I have zero interest in tennis that does not involve the Williams sisters, so this is all very exciting and reminds me of when I had to explain who Brett Favre was to my friends when we left There's Something About Mary.

You learn something every day.

It's not an unwatchable movie, and it's probably more competent than Moonraker in many respects, less well-tailored than For Your Eyes Only in several others, and feels like someone really wanted to make something for the kids to enjoy.  And, you know, you can't blame them for that.  Bond even dials back the sexing, his primary interest seemingly that in the age range of rich-guy-second-wife material, even if Adams is clearly Moore's junior by a couple of decades.  But if you're supposed to be entertaining kids, maybe don't title your movie Octopussy.

I dunno.  My favorite parts included the cold opening mini-airplane sequence everyone always likes, the chase through the crowded Indian streets, and probably my excitement when the circus people mount an offensive in the film's climactic scenes.  I mean - CIRCUS ATTACK!  You have to like that.

If you want a movie that's a punchlist of kind of Bond-ish things, this is certainly it, but it's a movie with a high stakes game of backgammon (that was backgammon, right?), and an alligator submarine.  Bond is clearly in "funny uncle" territory here and a pretty darn far cry from early Connery.

As we pass into the middle of the series (more on the complications around that in the next Bond discussion), you can start to understand why they shook things up with Dalton a couple of movies down the road.


*if you want to believe in the power of Scientology, Moore is also not that much older in this picture than modern-day Tom Cruise, who still hops around like Michigan J. Frog on amphetamines.  Something Cruise is doing is holding back the years.