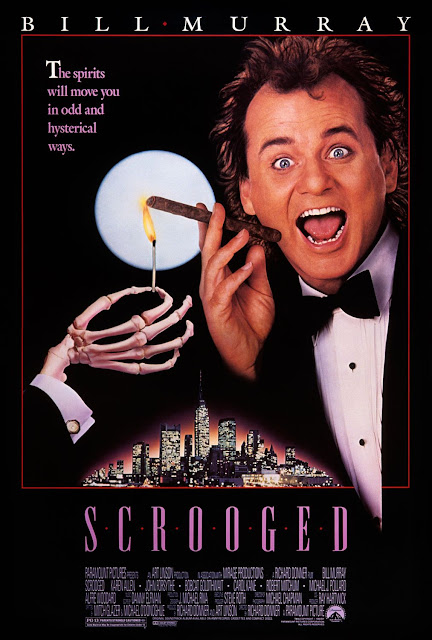 Way back in the long, long ago of 1988, I saw Scrooged in a sold-out theater on opening weekend.

There's not much else to tell.  I remember liking it well enough at the time, felt it was funnier than I expected, and went on with my life.  Sure, I've seen it a number of times over the years since then - enough so I couldn't even roughly guess.  And, it's one of those movies I'll watch just parts of as I flip channels.

But the thing is - and I don't know if I'm going out a limb saying this - Scrooged is a very, very good movie.  It is.  I don't mean that it's a really funny movie, though it is that.  Stepbrothers makes me laugh like a loon, but it's not necessarily a *good* movie although it succeeds at its goals.  But I tend to think of Scrooged less as a lightweight holiday comedy (see: Christmas with the Kranks.  Or, do not.), and more of a solid entry in the movies that earn a place in the Christmas movie pantheon.

And, it just might be the best to-film adaptation of A Christmas Carol.

Of course the movie rides on a chassis of Dickens' tale, which most people are so familiar they couldn't tell you when they first learned the beats.  The self-reflective trick of Frank Cross (Bill Murray) producing a live version of the show within the movie acknowledges this is nothing new, but the opening sequences show - much like many-a-Christmas movie - Cross knows all the trimmings and how this should look and feel and play to middle-America even as he's utterly failed to internalize any hint of the story's message.  Which is maybe the great sin of some many of us when it comes to A Christmas Carol and Christmas itself.

How the live action show, in rehearsals and as it's televised, paced to keep up with Frank's experience, winks to the audience (yeah, we know where we are), ups the stakes for Frank as he comes apart - not having the luxury of this whole experience occurring in his bed chambers - and is some pointed commentary on what we're used to gobbling up at home as entertainers provide spectacle while waving away meaning.

Scrooged remembers that it's a ghost story and those should be a bit scary.  The arrival of our Marley is genuinely freaky and not something for the kids.  Our Ghost of Christmas to Come is maybe the scariest I can think of (as is the look into the future).  That's a feature, not a bug, and while I'm not sure about the rating on this movie, in today's world, it should be a PG-13.

We can debate the changes the film made to the ghosts, because some meaning is lost from Dickens' tale, only the Ghost of Christmas to Come retaining, if not expanding upon, the prior version.  I think that's a legitimate question, even if I quite like these versions (I mean, who doesn't like Carol Kane?).  And rarely do other live-action adaptations spend much time on what's behind those characters.

At the end of the day, the lessons Frank learns learns are those we can stand to hear in youth, but it's a story for adults.  Even in the original telling Ebenezer Scrooge is a bit of a strawman.  He's rich but his life seems hollow and sorry, nothing in comparison to the warm home of the Cratchits.  But Frank's life seems okay - sort of.  He's got a job most of us can't even imagine, money, some form of respect, and isn't exactly painted as miserable.  Murray isn't walking around looking to kick cats, exactly, and he makes Frank maybe the most relatable take on Scrooge of any version I can think of.  He's frustrated by everyone, wants to see people trying to meet his sky-high expectations, and when they fail those, he has no problem kicking them to the curb.  It's the tough, demanding boss illusion we think of in America's business elite.*

And even Jamie turned to me while we watched the movie during the "for the love of God and your bodies, will you stop the goddamned hammering" sequence and said "you relate to this too much, don't you?"  And, indeed, I do.

The movie earns the moments where it goes for getting you a little misty-eyed.  The near-modern setting and concerns are recognizable, the themes of Dickens story as relevant and immediate as his story was when he was still reading it aloud each Christmas.  How many movies get you a little choked up just seeing a mom say goodnight to their children?  The discovery of Herman?  Or when was the last time Tiny Tim saying "God bless us every one?" didn't just signal to you that it was almost time for a bathroom break?  I mean, it actually works here.  Hell, even the kabuki scene of Claire telling street urchins to scram is a bit heart-breaking.

The cast is pretty terrific.  Robert Mitchum as a seemingly out of touch corporate overlord (but who may actually know what he's doing), A host of Murray brothers showing up (including as Frank's brother), Wendy Malick in a small role, Bobcat Goldthwait, Carol Kane, a very young Alfre Woodard playing older as our Bob Cratchit stand-in, and tons of other familiar faces both as characters and themselves.  And, of Karen Allen's stand-out roles, this one may be as iconic as Marion Ravenwood in its own way.

Of course, you can never say enough about Bill Murray, who we were all still thinking of as a "funnyman", as the press called anyone in comedic movies in the 1980's.  And maybe he doesn't quite hit the nuance of later roles, but he goes not on just an arc on paper, sticking the landing - the conclusion of the film a direct appeal to the audience as TV audience and movie audience become one.

In conclusion:  Scrooged.  Make it part of your Christmas-viewing traditions.  You can drop Santa Claus: The Movie.

I keep it on occasional rotation. I usually watch it every other year or so. I understand that the original take was perhaps even darker, but that studio execs objected to the tone. The Danny Elfman soundtrack is frequently offered as one of the residual pieces of evidence that this once was an even darker take... I think it's plenty dark as is...

That's interesting. I've not read anything about the production of the movie.

I would argue that the book of "A Christmas Carol" itself is pretty dark,and at least Murray helps keep things lighter.. Probably the closest straight adaptation I've seen was the George C. Scott version, which is pretty miserable right up til the finale.

"The original tone of this film, as you can hear in the music, was much darker than what ended up on screen. Although the score was a pleasure to write, it was pretty much buried in the final film. Another one of 'life's bitter pills'...Oh well." - Danny Elfman, (From the liner notes of Danny Elfman's "Music For A Darkened Theater Volume One")

Would love to see a rough cut of the darker version...