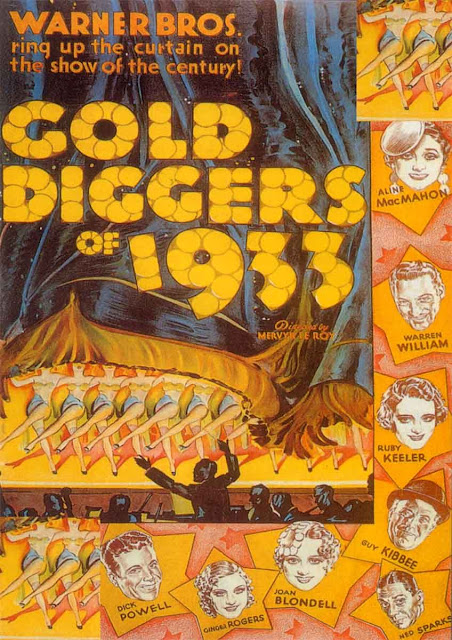 Dick Powell plays the scion of a wealthy, dignified New York family.  His family supports the idea of him being a musician, but had visions of him as a great composer of symphonies, not low-class Broadway shows.  But he gets involved in a show, writing the music, and falls for Ruby Keeler, a showgirl.  And, of course, has to take up the role of "the juvenile" when the middle-aged guy playing the part throws out his back.

The show is a huge hit, and his brother - who controls his funds til he turns 30 - finds out about the musical and the showgirl.  He decides to buy off the girl (assuming she's just a "gold digger"), and antics ensue.

Maybe the weirdest moment of the film for a modern viewer - or a viewer my age - is being absolutely certain you recognize the kid playing the baby in a musical number, but you can't quite place him.  And then you realize it's Billy Barty as a kid.  Mind.  Blown.

And, of course, Sterling Holloway shows up for about five seconds, reminding you the voice of Winnie-the-Pooh was also a human dude in real life.

I'm on record for thinking Dick Powell is great in his second-wave of movies as a noir lead, so it's also awfully strange to see him at this point in his career playing the juvenile (playing the juvenile).  And my hat is off to him.  It's basically he and Cagney who seemed to be able to make the jump between these sorts of roles where you like them as the cheery song and dance man, and totally buy them as a whiskey slinging tough guy.  In short:  Dick Powell is underrated.

The sexual and social politics won't come as a surprise to anyone with a basic grasp of the last 150 years of history, and in many ways, the movie is steeped in those politics, taking them for granted.  In short - the fear of shame should one marry outside their class, and that those cheap showgirls are good for a laugh, but are not marriage material.  Of course, Hollywood loved exploding this idea as entertainment for the masses, not the 1%.  So, of course our plucky showgirls weren't after money - but they weren't going to turn it down, either.

It's a musical.  It's going to end in weddings.

Frankly, the women in this movie are pretty great, especially Joan Blondell, who was at about the height of her career here.  While all of the female characters are showgirls, the movie certainly makes them all different enough with different arcs, wants and needs.  They aren't treated as props, even if the men of the film seem to think that's the role for women.  And, indeed, as this is a Depression-era film, it's about having pluck and personality that will run circles around those stuffy rich dudes (except for Dick Powell, who seems cool).

As per pure entertainment - that's was the idea.  It's not exactly here to make a social statement, so any commentary about the time is just part and parcel of the language and standards of the time.  But as such, it's an interesting lens into a particular era of both American cinema and culture.
Posted by The League at 2/12/2017 10:11:00 AM

Re: Sterling Holloway. Growing up with Fractured Fairy Tales then seeing Edward Everett Horton in movies still blows my mind.

I often wonder how many people really put 2 and 2 together regarding Boris Karloff and "How the Grinch Stole Christmas".