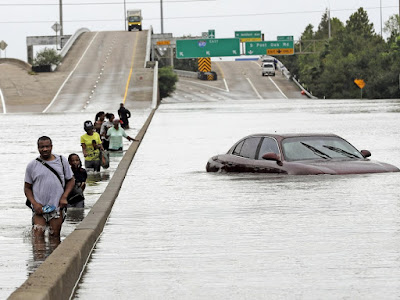 I do not expect most people to understand Houston.  I don't get it, and I go there pretty often and have friends there.  Lived north of there myself back in the 1990's.  It's easy to write-off as a city in dumb 'ol Texas that's probably getting what it deserves.  Look, Houston, like any place on Earth, has its issues.  But it's not some backwater redneck town.  At least it hasn't been since the 1980's.

Houston is not just a well-populated metroplex - fourth largest in the country - it's a multi-ethnic, international mix of people with a vibe all its own, a place of genuine opportunity, and full of fine, hard-working people of all stripes.

It is geographically huge.  Because so much looks the same in the shots they're using in the news footage, that's difficult to get, but what considers itself "Houston" covers roughly fifty to seventy miles across in any direction.  These days I don't know when you quit saying you're out of "Houston" when you go up I-45, but it's all one corridor til you leave Conroe, so that's more or less an hour and a half on the road that's all one town.  And it does the same going East/ West.

And all of it's in trouble.  Since my last post on Houston, I've seen footage of the area where I went to high school under varying levels of water.  For some reason the thing that broke me was seeing St. Ignatius Loyola, the Catholic Church I only stepped in once, submerged under 3 feet of water, at least.  St. Ignatius was the church of many of my friends, it's a positive force in the community, and I don't recall them ever receiving flooding before.

I've heard stories of a colleague who was canoed out of her home with her two children and husband, another colleague's parents who were also rescued.  Another friend's mom (who just lost her husband a year ago) is staying with a friend as her house is flooded.  It's everywhere.  I don't know how we can expect a city of millions to recover.

And as a double-hit, I know a lot of Katrina refugees wound up in Houston.

So, as too few of us own boats or helicopters, I'm suggesting we do a little something to give.

I guess it's people being people, but already we're seeing articles complaining about various charitable organizations trying to help out Houston.  We're going to ignore that and provide a menu of folks who can provide a direct line of help:


Houston is nothing if not stubborn and resilient.  As much as I believe in the spirit of Austin, I recognize and appreciate the heart that is Houston.  Good people live there.  There's a kindness to the city that's genuine.