I'd been reading comics for about eight years, but in 1992 I had limited money and was buying music and movie tickets and whatever else we did in 1992 (for me, that was moping).  Me and comics fell out of love there briefly.  I might still pick up X-Men or Batman off the rack, but my focus was elsewhere (I'd get back into comics when a new comic shop opened near my house and I walked in and picked up the Ramadan issue of Sandman - so blame Gaiman and P. Craig Russell).

It wasn't the first time the death of a well-known superhero hit the mainstream news - that was Robin/ Jason Todd and the infamous call-in (can you even imagine that today?).  But now Superman was going to die, and people took notice.  They were killing Superman - the only superhero other than Batman every single person in America knew back then. 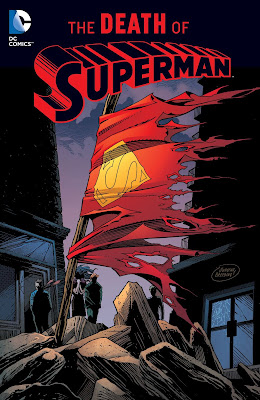 Honestly, 1992 was a while ago and I don't remember discussing it much because none of my friends at that point in my life read comics (today's kids will never understand that you could just be into something without it being your "lifestyle" or enjoy "diverse life experiences").  But I knew enough about comics (ie: I knew who Jean Grey was) that I rolled my eyes and said "yeah, sure.  'Dead'  Whatever."  And went about my day.

It was a decade before I heard first-hand stories about the mad rush around those comics, the crazy speculation, etc...  I knew the story was big, but I was worried about other things at the time, I guess.

Honestly "Death of Superman" probably delayed my interest in picking up Superman comics regularly by a few years.  I thought the event looked preposterous and not something to just jump into midstream if I wasn't already invested in Superman (ironically I had been picking up stray Superman issues just before).  And then when he came back with a mullet at what looked like a sad and dated attempt to be trendy, which was not what I wanted out of Superman.  (Honestly, the mullet-cut comics are fine, just FYI).

I finally purchased the trades of Death of Superman, Reign of the Supermen and Return of Superman (or whatever they called it) and read them in 2000.  The story is better in outline than as presented in a lot of ways - it was intended as an ongoing part of the winding four Superman titles of the time (the "Triangles Numbering" era).  While the art in those "Death of" comics is really pretty stellar, the story itself - isn't much of a story.  It's the opening chapter in a much longer saga.  Doomsday isn't a character, he's a plot device.  Doomsday's brutal passage from nowheresville to Metropolis has no arc other than "watch people get squashed".

What the writers knew is that the actual death of Superman if at the hands of a goofy monster isn't that interesting - that's just a thing occurring.  What's interesting is what happens when Superman is gone.  What does Lois think?  Perry?  Lex Luthor?  Metropolis?  Batman?  The world?

We got four characters out of Reign of the Supermen, all of whom I have an affection for of some type, especially Steel and the 00's revamp of Superboy.


But...  What's weird is that all filmmakers ever want to focus on is "let's watch Superman get killed".

In a way, I get it.  In theory it should be dramatic.  The unstoppable Superman gets stopped.  The living icon dies.

But if you've ever read the comic - there's nothing Shakespearean about it.  There's tension of melodrama, but it's as straightforward as a baseball bat to the forehead.  The death of Superman in iterations in Imaginary Superman stories or where he was pulling a fast one - they were more fleshed out as to the why's and wherefore's and meaning of the death.  Heck, Whatever Happened to the Man of Tomorrow was a tremendous "death of Superman" story that nobody ever talks about, I think because it's kind of a traumatic read.

Death of Superman is brutal and to the point.  It's not Lex's machinations or Brainiac finally getting Superman out of the way.  It's not even Mxyzptlk finally cutting to the chase.  It's a thing we've never heard of showing up and hitting Superman until he dies.  Sad, sure, but it has more of the impact of a sudden accident than it does an endgame story like Whatever Happened to the Man of Tomorrow? or a noble finale as in All Star Superman.

But this is what they keep returning to, over and over.

In the comics we wound up with multiple returning appearances of Doomsday, a complete origin story, and multiple uses of the character in varying degrees of success (I champion Nick Spencer's use in Action Comics at the end of his run).  But for a while there, man... did DC Comics keep returning to that well.

A while back DC's animated arm, part of WB's animation division, announced they were returning to Death of Superman and the trailer is now available.

I say "returning to" because DC already made this movie in 2007.  It's not particularly a great adaptation of Death of Superman, but it does exist, and for this 43-year-old dork, it feels like it came out yesterday.

That prior movie was called Superman: Doomsday, and it was produced by the old guard at DC Animation, led by Bruce Timm.  It's been on the shelf at Target and available everywhere since that initial release.  Here's a weirdly lo-res trailer.

I can't say I love the cartoon.  It's fine, I guess.  Name voice talent.  Big rip-roaring action.  Decent character design.  And, denied the ability to do a multi-part movie series, which might have made sense, they cram in the entire three part Death-of storyline by shaving off huge, important chunks of it.

Who can say what happened at DC Animation that they wanted to do this again?


It's also not the first or last time in a movie.

It was the plot of the Kevin Smith penned Superman Lives! movie that was to feature Nic Cage that the kids today think would have been great (it would have tanked.  Trust me on this one.).  Tens of millions of dollars went into pre-production on that movie and they didn't make it.  While Doomsday is far from a good character, I remember the 90's and I'm pretty sure I know how he would have been used, because I saw Bane in Batman and Robin.

And if that's a cheap blow, keep in mind, 2016 brought us Batman v Superman: Dawn of Justice, which gave us a six year old's drawing of a person brought to life as Doomsday.

But with Batman v Superman, and DC/ WB finally (finally!) got to show Doomsday as a terribly designed post-LOTR rock troll sort of thing who does, indeed, kill Superman.  So, hey, well done.

Sure, it's one of the most deeply unsatisfying and muddled movie endings in recent memory, leading into one of the floppiest bits of plotting and storytelling in the already balsa wood architected Justice League.  But, yeah, Superman's death is unearned and dumb in the context of Dawn of Justice, and his resurrection even weirder and more poorly conceived in Justice League.

Both the 90's-didn't-happen version and the 2016 film version missed a crucial part of what made Superman dying so significant when it happened in the comics: he had history.  The 90's version was supposed to be tied to the 70's an 80's films, but it would be a new cast and new audience not born when the originals appeared (a huuuuge problem for Superman Returns - which toyed with killing Superman if you recall).  The 2016 film had barely established Superman and very well established that people hated him and with good reason.  With about fifteen lines in the whole second movie - who was really going to miss this guy?

I am generally familiar with the current house style for DC Animation that adopted a sort of Nu-52-ish approach to the characters (it isn't a mistake that I dropped off watching the movies after seeing a hole shot through someone's head in Flashpoint.  Not because I'm a sensitive soul, but I could see where they were headed, and it was a particular kind of artificial edginess and gamer-dude machismo I don't make time for).

Nu52 may have been dead at DC Comics for a while, but an animated movie takes a while to make.  I can't blame them for the flick.   The trailer looks squarely in the shockingly already dated-looking Nu52 style - which, given the tone I've picked up from the trailers: of course they couldn't not remake this story.

Look - my beef is not with Death of Superman, which served it's purpose even if they've milked this thing so dry it's blowing puffs of powdered milk.

Superman has been around for 80 years, and there's rich, rich content to be developed as films buried in those thousands of comics.  Killing Superman may make filmmakers feel like they're making a statement, but anymore, that statement is "we keep doing this".  It's... it's boring, guys.  And that's the one thing you don't ever want to be in superhero media.

Yeah, I guess I'm glad that this is a two-parter and we're supposed to get more of the story from the comics, but...

I had hoped that now that WB had *finally* gotten their "Batman and Superman fight" AND their "Superman dies!" issues taken care of (oh, man, someone at WB had such a boner for these two concepts going back to the 90's), it would be done with for a while.  But here we are.