Koko the Gorilla Merges With The Infinite 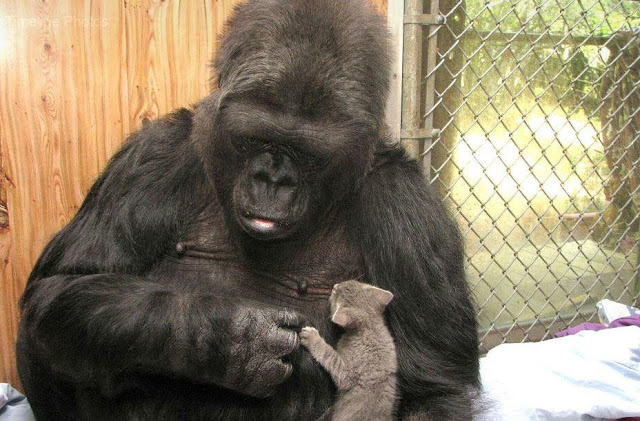 We are sad to report that Koko the Gorilla has passed.

I first learned about Koko the Gorilla back in Elementary School.  For some reason, my class read an article on Koko, the gorilla who was learning sign-language.  She'd been raised by Penny Patterson, who taught her sign-language, and she'd develop a 1000 word vocabulary.


Koko was an odd celebrity - a gentle giant who met actors and other folks who would come in to take an audience with a creature not-quite-human, who could express herself, express curiosity, and "speak" to others.  She didn't travel and appear on The Tonight Show.  The logistics of keeping a being calm who can tear your arms off without a blink probably prevented any skits with Johnny Carson. Instead - you went to Koko.  And the internet is filled with video after video of Robin Williams or Mister Rogers chatting and hugging it out with a gorilla - something reserved for science fiction movies.

Koko held up a strange mirror to humanity.  She wasn't us, and I don't think anyone was concerned she was going to start extolling upon the nuances of epistemology.  But she also was a being who thought, who wondered, who said things and had feelings.

I think a lot about how I spend time with my dogs, how we communicate all day long in a series of gestures, sounds, placement, etc...  And I think about how, while it's not hard to figure out "why" the dogs are communicating what they are "saying" (and alarming when you can't figure out what they're up to), I also think about the people who - for whatever reason - believe that only humans have a mind and experiences and can communicate.  Or that only humans can know things like love.

But I'm also not someone who grew up putting the dog out back and going out to feed it once a day, ignoring it the rest of the time.  And, while I understand that's "country", it freaks me the hell out.  Because I know what the dogs prefer.  And even if that comes from a deep instinct, is that any less of a drive than our own to be among other people?  To communicate?

And that often set me thinking about Koko - a gorilla who was painstakingly taught how to share her feelings and thoughts - impressionistic as they may have been to our minds - and how Koko bridged that gap for us.

There will always be people who can't or won't recognize the spark in the eyes of animals, who declare a divinity or natural pecking order wherein the human brain has evolved to host emotions and relationships that, somehow, nothing else on earth can conceive of.  Koko, it seemed to me, argued that point.  And while I am first to let the scientists try to assess and report on these things, and I do believe there are clearly cognitive differences between humans and all other species (leaving us oddly alone as a species aware of it's own mortality, so we have that going on for us), I also believe we have more in common with Koko and her fellow apes than we'll ever wish to admit.

Koko passed at age 46.  There's no clear successor to her odd celebrity, but that may be okay.  The more apes of all species we can put forward as examples of what Koko embodied, the more we have to consider what she represented and what it means for our relationship with apes, with dogs with all the creatures on the Earth.

Just wanted to say this is a great post. We'll miss you, Koko.

I also thought it was a good post. Thoughtful and poignant. And yet, when I think of Koko, I will still always simultaneously think of this... https://www.youtube.com/watch?v=JC4C_Gcp_dM