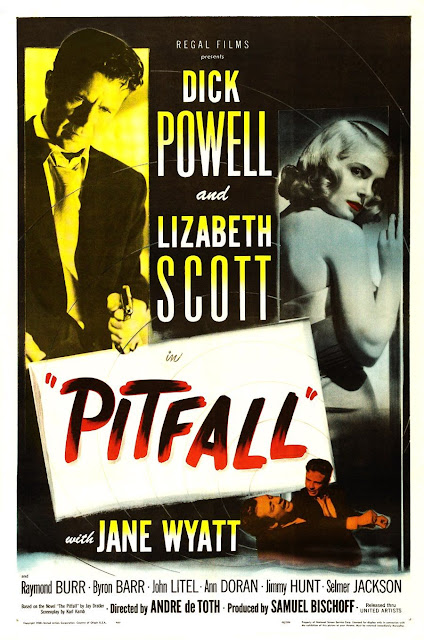 This was the second time I'd watched Pitfall (1948), an indie produced noir starring Dick Powell, Raymond Burr and Lizabeth Scott.


As I'd watched it before, before putting fingers to keyboard, I returned to my original write-up from 2015.  I don't usually do this, but I only have a few additional things to discuss beyond exactly what I wrote here, so I'll just suggest you read my post of three years ago for the vast majority of the gist of it.

As often happens with any film, when I rewatched the movie, I appreciated the movie a bit more than on the prior viewing.  There's less here in the way of gangsters, detectives and murderers than in other noir movies, and in many ways - it's a domestic drama.  It's the story of a guy who feels trapped in his middle-class suburban life, and just as that's hitting it's peak, he meets a young, willing, shiny girl - not a femme fatale, just someone who goes for him and isn't tied to dinner on the table by 5:45.  Someone who isn't afraid to do a little day-drinking with him.

What could and should have been a couple of days culminating in a mistake neither sought to repeat gets turned upside down by a guy with a startlingly familiar looking sense of entitlement.  Burr plays a heavy is a 1940's version of a "Nice Guy" who would "SWAT" a girl who turned him down, after calling her a "stuck-up bitch" and trying to get her fired from Applebee's.  Certain that Powell's tryst with Scott was why he didn't get a shot (he is very wrong and told so by Scott), Burr turns his anger back on them, threatening to expose Powell's affair to his wife (Jane Wyatt).

It's not a movie with a tidy ending - no one winds up with a happy ending in this one, something rarely seen even in noir.  No sacrifice play by a hero sets the girl free, no one walks away scott free, told to start a new, exciting life (you gotta make the studio chiefs happy, and they know nothing sells like a happy ending).  Despite her literal blamelessness, Scott's character winds up at the bottom of the heap - maybe going away forever because neither Powell nor Scott wanted to deal with the truth, which would jeopardize the happy suburban home.  So, hope you're happy, scrappy 1940's movie kid.

I don't know why or how Scott's fate didn't land on me like a ton of bricks the first time I watched it, but, man, it sure did this time.

In general, I'm not a fan of semi-similar films from the modern era.  Maybe the Lifetime version of these movies are so melodramatic they're kinda wacky, and the "classy" versions of these movies just always play like a cologne ad gone wrong (see: Unfaithful).   I'd argue this movie handles the plunge into infidelity more organically or at least gives it a set-up - it doesn't feel like it's two people batting eyes at each other and then we cut to two well-lit people in high-threadcount sheets.  Heck, it's 1948 so you have to read between the lines to know anyone ever got undressed, so it's not even selling the sex everyone is trying not to talk about.

Unrelated to all this, there's also a sequence in which Dick Powell finds a stack of comics in his kid's room with an issue of The Flash prominently held up as shameful reading (Flash #77) that he learns his mother sent.  It's an odd moment as it's one of the few times I can remember an adult, especially this early, just picking up a comic and talking about how the contents are garbage. *

Pitfall has a lot to recommend it, and while it doesn't have some of the grittier details of Double Indemnity, it does feel like part of the same noir family tree.  And if you've liked Dick Powell elsewhere in his sensible-gumshoe-with-a-bit-of-smartass -in-him persona, you could do worse.

*if it will make our readers feel better, Powell's attempts to improve his son's reading selections don't go terribly well as the movie progresses