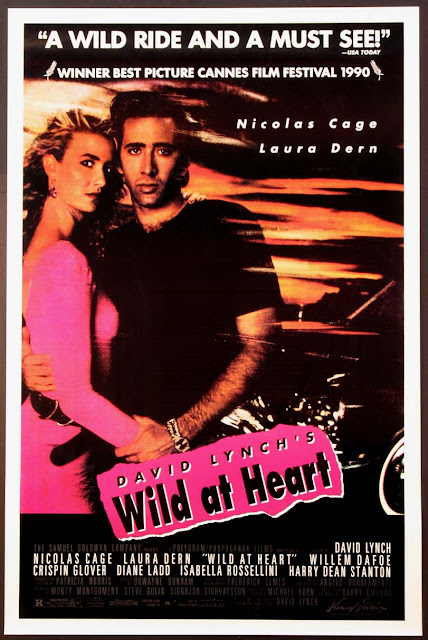 
Wild at Heart (1990) was the David Lynch movie that arrived in conjunction with Twin Peaks fervor.  I didn't see the movie in theaters, but I rented the movie almost immediately when it showed up at the local videorama to try to get a bit more of whatever I was getting out of Twin Peaks.

Honestly - Wild at Heart wasn't that.  No magical mysteries with owls and whatnot.  It had mostly a different cast (and one day I'll try to parse what Sheryl Lee and Sherilyn Fenn mean to Lynch), no quirky cops...  Instead it leaned into where Lynch was headed with his other films, grounded in a crime-book road movie.

As non-standard-issue of a movie as it may have been for the era (the same era that was giving us Doc Hollywood and The Hard Way), it's also practically a CBS movie-of-the-week in comparison to, say, Eraserhead.  I'm not sure, exactly, when David Lynch's name became a household word, his films universally known, but I kinda feel it was right around this period of Twin Peaks and Wild at Heart, and it may have been the general accessibility in a market that was totally onboard with a hard-R rating at the time, that settled audiences on "yeah, that dude is all right."

I should also mention, Wild at Heart won the Palm d'Or at Cannes the year of its release.  So both college kids and European film festival goers got behind this one.

It's worth nothing the chronological order in which some of Lynch's movies arrive - and while one could speculate what Lynch was doing and how he was reacting to studio notes and whatnot.

and obviously more after that...  but not much.  Lynch's filmography is a lot shorter than you're thinking.

The above is an incomplete list and just his more prevalent stuff is represented, but from Eraserhead to The Elephant Man, he's working autonomously to working with a studio to the big-budget expectations of Dune, and then back to indie pictures with Blue Velvet.  And then a TV series - where you're going to get the most interference of all.  That he'd want to do a movie in the middle of the TV chaos kinda makes sense.  And the effects of his departure on Twin Peaks as he went off to work on Wild at Heart are well documented.  It was more or less his return in Season 2 to wrap things up that the show retains any following, I believe, and was able to claim it's phenomenal 3rd season 25 years on.

As much as we think of Lynch as auteur, Elephant Man, Dune and Wild at Heart all had source material.  After Eraserhead, he was also working with actors with very specific talents and who had reputations with audiences and critics.  He may have had something approximating a core troupe he tapped, but he also had Dennis Hopper and folks with their own, stand-alone careers.

And it's safe to say - aside from putting Chris Isaak on the soundtrack, Wild at Heart didn't launch any careers.  Lynch grabbed known actors: Willem Defoe, Nic Cage, Diane Ladd, Harry Dean Stanton and already-a-veteran Laura Dern.  But it's a hell of an assemblage of talent.

In an era of Nic Cage being best known by younger generations as a gonzo actor with bee concerns and financial issues he solved by taking any job that came across his desk, it's hard to remember the pre-Oscar Nic Cage when he was an indie darling and a shibboleth for cool.  And, therefore, the best and only casting choice for Sailor, the Elvis-crooning former mobster in a snake-skin jacket with the key to Lula's heart and libido.

For Dern, it's an interesting ride from the "the girl" in the Rocky Dennis biopic, Mask, to the girl next door in Blue Velvet, to hyper-sexualized weirdo Lula Fortune in Wild at Heart to Dr. Ellie Sattler in Jurassic Park.  Never, ever tell me Dern doesn't have range (hell, her work lately is all over the map, from Kimmy Schmidt to Big Little Lies to Diane in Twin Peaks to Star Wars).

Her real-life mother, Diane Ladd, plays her mother here - a deeply corrupt Southern Belle, a figure of lust for the men of her age around her (poor Harry Dean Stanton) - but she's a nightmare only Sailor seems to see for what she is.

The film opens at a sort of fancy affair where a guy gives Sailor regards from Lula's mother, pops a knife and Sailor winds up (violently) killing the knifeman.  Two years later, Sailor emerges from prison, Lula waiting (now 20 years old), and the pair, after getting reacquainted, decide to head for California, breaking Sailors' parole and getting away from their old life.  Lula's mother - unhinged - sends first Harry Dean Stanton to find them in New Orleans, and then summons "Santos" (JE Freeman), to put a hit on Sailor so she may retrieve her Lula.

The pair run out of money in the unfortunate West Texas shithole name of "Big Tuna", losing time and faith in themselves and their situation.

In Wild at Heart, there's nothing overly complex about the plot.  The journey from start to finish, of overcoming obstacles to find a more mature version of the lust-fueled infatuation-type love of the first act as the movie ends is maybe unusual for a noirish crime story through the underbelly of the US South of Mason/ Dixon line - but it's not hard to follow (which is probably why I dug it in high school).  The movie relies, rather, on tone and character - something that used to happen in movies before 2006 when they ceded this over to television.  And, given what usually gets applause in Cannes, offbeat tone poems with some sex and violence is the way to go, if you're out to make a movie, kids.

There's heavy referencing of The Wizard of Oz throughout, something Lynch seems to enjoy, plenty of southern white trash culture to navigate, and no small amount of sexuality in the movie - enough so that I sort of wonder how this movie would be received in the U.S. if it arrived today in our era of puritanism by a thousand cuts.  No doubt the movie would now be greeted by dozens of think-pieces debating Lula's (raging) sexuality.

As with other Lynch films, violence arrives in bursts (matched by the sudden intrusion of explosive music stings that had me riding the volume switch lest I wake the dogs while watching the movie).  There's no question of the film's escalation of Blue Velvet-esque brutality and what Lynch is willing to show (also: all the simulated sex).  Heck, the  BluRay from Shout Factory includes an un-retouched sequence of Willem Defoe's head getting popped off his shoulders - an edit requested by the MPAA for an R rating - if that's something you want to see.

At the end of the day, it *is* a love story,  And Dern and Cage's chemistry on-screen makes it buyable.  The Elvis-tinged dialog of Sailor Ripley and Lula Fortune's dreamy, make-believe dreams of she and Sailor's Yellow Brick Road journey makes for curious characterization that Cage and Dern turn into iconic performances.  And, if memory of 90's indie-scene movies is accurate - their hard-riding roadtrip and unlikely romance likely fueled other movies (would True Romance have existed without this movie?).

It's Lynch, so I won't recommend it for the whole family, and it's likely you've seen this one before.  If it's been a while - the movie holds up better than I expected.  And, frankly, with a few decades more under my belt than the first time I watched it, there's a lot more in the movie than just "edgy stuff" - and worth a review.

Lynch's choices, from off-kilter acting by solid performers, to segues of side-bar stories (everyone remembers Glover as Dell, the sandwich making cousin of Lula), to location, casting, etc... are all so specific, when you do have to do work to keep up, it's worth the effort.  He's sometimes doing weird for weird's sake, but even in that - it's worth asking "why?" in the moment.

While the work stands apart from what I consider to be a sort of Eraserhead to Blue Velvet to Twin Peaks: The Return continuity - based on another writer's novels - we can at least see the commonalities in the worldview he's putting to screen, the untamed beasts living in plain sight around us.  It would take a thesis to get through all that, and maybe one day when I feel more comfortable in my Lynch-viewing to wade through it, but let's just say he seems like an old-fashioned romantic at the core.

The phrase "bunny jump fast" still squicks me out to this day. Luckily it's not a common one.

Well, upon review, there's nothing that isn't upsetting about that scene