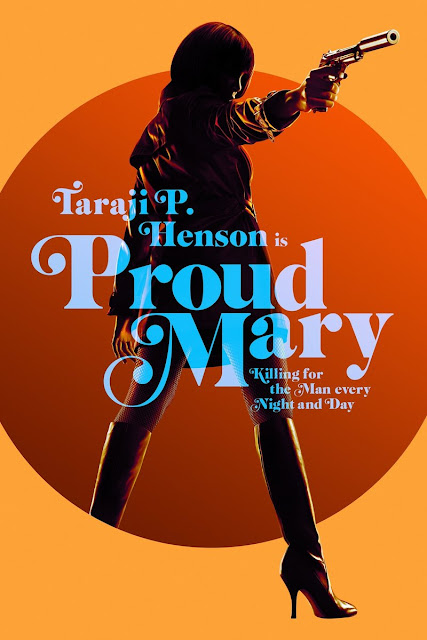 
When the trailers hit for Proud Mary (2018), I was going to go see it.  I like Taraji P. Henson well enough*, and was willing to see her delve into action cinema, which is squarely in my wheelhouse.

However, a mix of bad reviews and an incredibly short stay in theaters (and a limited  number of theaters even carrying the movie) plus busy schedules meant I missed it.  But an airplane ride and the fact I couldn't make out anything any of the accented actors in Film Stars Don't Die in Liverpool meant I just sort of picked a movie to watch on the back of a chair during a flight this week. Movies:  always meant to be seen from 8 inches away from a dirty screen on a chair.

Henson's range is broader than one would think from her starshot of popularity via Empire, as evidenced by her terrific turn in Hidden Figures.  But knowing how far she can push things and pull it off with no small amount of charm, I was expecting a kinetic "good PI in a bad world taking out the trash" sort of thing that would act as a showcase for Henson's Henson-ness.

I don't think the trailers did anything to dissuade me of this notion.  Featuring Henson working out, then putting on a disguise, then showing off her armaments, then wham-bam action.  I figured on a rockin' soundtrack of popular favorites from prior decades over a modern setting (note: the name of the film), and lots of quippy fun stuff as Mary punted villains with the toe of a boot that cost more than my annual salary.

Instead - Proud Mary is a mish-mash of mob picture/ family mob drama/ and assassin-develops-a-conscience-via-an-innocent picture.  If you came expecting to see a smart, sexy, kick-ass superhero - more or less what was advertised - I think that's what they think they're doing, but this the film finds the flattest way possible to present that concept.

The film suffers from odd structural and pacing problems - providing a set up of Mary as assassin finding out that the person she killed had a son (here's the thing: I don't think assassins get to specialize in offing the child-free, but here we are).  We leap forward a year to find that son is now an Oliver Twist-type orphan whose Fagan is an abusive Russian mobster colorfully named "Uncle".  And then a bunch of illogical stuff occurs that winds up with Mary killing Uncle and his minions (why doesn't she just help the kid ghost on Uncle?  It makes no sense in the moment and less so once you know the stakes).

Turns out, Uncle is a middle-manager for the Boston Russian mob, and - we learn something like 20 minutes into the movie - in a weirdly graceless way - that not only is Mary an assassin, she's not a contract assassin, she's a ranking member of a mob family headed by Danny Glover (I know!).  The Russians think the death of Uncle is a move on their territory - specifically by Danny Glover, and trouble erupts.

I don't know if the script was wildly inconsistent, if the director/ editor/ studio made changes... but whole plotlines spinning out are inconsistent, time is burned on things that go nowhere, the charm of the Mary/ Danny relationship is deeply overestimated.  There's a lot more talking than shooting - and when the shooting occurs, it's in the Commando-style, where our protagonist can walk through a hail of bullets while popping off anyone she likes with a kill shot, which feels a bit at odds with the mob family drama anchoring the film.

We spend a LOT of time on the Danny/ Mary relationship, and despite the fact both actors are generally fine... what we do get is terribly repetitive and nothing about it makes a lick of sense even though the two manage to find some awkward chemistry.  If you want to believe Mary is a smart person, she has to at least explain *why* isn't doing smarter things when it comes to caring for the kid.

Several times during the movie I flashed back to Atomic Blonde, which similarly seemed derived from and depended upon the audiences's familiarity with similar and better movies, this time with a woman in the lead.  While, overall, Atomic Blonde mistook intricate plotting of a Le Carre novel and the action sequences of a Bourne movie for "just flail around a lot - it doesn't matter if it holds together", it at least had a certain, derivative sense of style.  Proud Mary just looks and behaves like an expensive show on the USA network.

If one goes in expecting an Isaac Hayes inspired score based on the posters, trailer, etc..., or for the inevitable insertion of the song "Proud Mary" to make sense in context or work in any way: I have bad news. When the song finally does appear, it's so out of place and at-odds with the action of screen (murder.  So much murder.) that it's sigh-eliciting.  Mostly we get a blunt instrument of a score that works against the film, suggesting a scale and tone that doesn't match what's on screen and, I think, one other pop song.

There's an odd avoidance of race ever mentioned in the movie - to the point where I wondered if the script had just been left "as is" when it was assumed the Boston-based crime drama was going to star a gang of Irish-Americans and then a "I don't see race" card was thrown on the table when the movie was made.  I mean, I don't know much, but I do know Boston has a near-Deep South reputation for not avoiding talking about race - but it's just... weird.

What may be true is that the movie and script came first, Henson came along and made it possible to make this movie, rather than someone sitting down and saying "Taraji P. Henson wants to make an action movie franchise.  Go write that."  I hate to ding a movie for not being what I thought it would be or for not matching the ads, but... then the movie has to be better than this one.  And I think there's a market for a modern-day action heroine who knocks dudes through plate glass windows then says something hilarious.

There are a few moments here and there where I got pulled in by at least the overall plot, and seeing Glover as a mob boss is a novelty.  But mostly this movie seems like a first draft of a leftover early 90's script dusted off and made with no attention to who was cast in any of the roles.  And the sheer bodycount (and utter lack of police as a concern) just feels like something from another era.

There's probably 10,000 more words about what went wrong here, plot problems, character problems, things that are silly or dumb.  But... anyway, I'll leave it alone.  And hope Henson's agents do better next time.