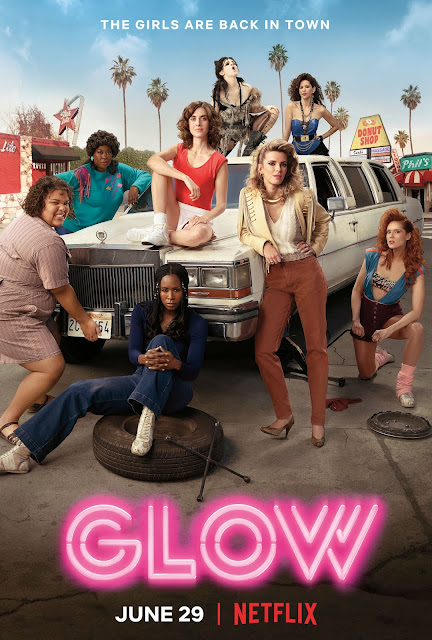 
Fans of the John Turtutto/ John Goodman starring film will recall that Barton Fink (Turturro) is brought out to Hollywood after a success on the New York stage to write pictures - and is asked to turn in a script about a wrestler, something he knows nothing about.  By the film's end, and a lot of water under the bridge, he hands in his script to the studio chief who bawls him out, talking about how no one wants to see a wrestler wrestling with his soul.*

I hear GLOW has middling to low ratings, excelling mostly within a profitable demographic (how that helps non-advertising Netflix, I do not know).  And I suspect that the low-ratings stem from the fact that the show is about wrestlers.  Lady wrestlers.  If you're reading this because you want to learn a smidge about GLOW but haven't watched the show - I hope I can provide you with some re-assurance that the show is not a wrestling show nor is it a sitcom about wrestlers.  Honestly, I think you should at least give the pilot (Season 1, Episode 1 for the kids out there) a shot.  If you do love wrestling or ever did - you owe it to yourself to give it a shot.

Though GLOW never pretends wrestling is "real" and frames the showmanship as highly athletic semi-scripted entertainment, over twenty episodes, the series managed to capture characters who bring their crises, their lives and all that that entails right into the squared circle.  At times, the messy personal dramas of the characters dovetail with the exploits of their characters and wind up in the ring, reflected and magnified into the absurd world of simple stereotypes and folks in tights duking it out - and, yeah, maybe wrestling with their soul as much as with each other.

Don't get me wrong - the show is still riotously funny.  I likely contain a low tolerance for a tear-jerking weeper or a serious drama about wrestlers of any gender in any era.  The Dramedy mix of the show provides an oddly consistent tone not in spite of the baggage the characters bring and the events around them, but because of those things.  Sometimes shit gets so bad, it's funny, you know?

The talent running the show has background in theater and involvement in Orange is the New Black (which I've never watched, I'm sorry), and an eye for character and story and an ability to make these very specific things feel relatable and universal.  That's no small thing.  And it's also no small thing that Netflix and whatever is happening with serialized narratives have reached the point where genre concerns and familiar settings (cop shows, lawyer shows, hospital shows) are no longer the default.  A single-camera comedy not about a single family or which moves between comedy and drama in the same scene is oddly cutting edge for TV, despite obvious origins in theater and film.

You've got a tremendous cast to thank - each perfectly cast (mad shout out to casting directors).  Mad Men's Alison Brie as Ruth - the *serious* but unsuccessful actor, Bettie Gilpin as Debbie Egan, her former friend and former soap star, and Mark Maron in the unlikely but a spot of pitch-perfect casting as a washed up shock horror director taking a paycheck.

In Season 1 the cast was cloistered in a fleabag motel, trained, established their in-ring personas and dealt with... you know, you should go watch it.

Season 2 catches up with GLOW as the characters are given a season to shoot for the local UHF channel - last season ending just as they put the tape of the pilot into the player to be broadcast out to the greater LA area.  Ruth and Debbie are still barely speaking, Debbie's husband has filed for divorce.  Justine is now living at Sam's house as he tries to figure out how to be a father figure, and Cherry is out of play as she took the TV pilot.

I don't want to get too into the actual details - it's not a soap opera.  Instead, I just want to give props to a show that - sure - has supporting characters who may not have the complex storylines or depth of the main characters - but all of them feel complete.  There's a story there for everyone even if it's not at the forefront, and all of those actors carry it.

Often it seems that whatever made Season 1 work stumbles in Season 2.  I've given up on many-a-show an episode or three into the Sophomore effort.  While I won't describe the seasons as seamless - the focus is slightly redirected in Season 2 as the novelty of "women exposed to wrestling" gives way to "we're putting on a show!" and minor character positioning changes - it's amazing how well the two seasons flow.  And, yeah, I did re-watch Season 1 about a week prior to Season 2 arriving.

The transition from just wrestling to the GLOW cast adding skits and additional material to the show reflects broadcasts of the original program - and a highlight of an episode is more or less a chance to see the produced show, sketches and all.  And the wrestling is far more impressive this season (the real GLOW wrestlers were nuts if the brief sample I saw online and on DVD is any indication.  As Jamie said "well, Ryan, women are scrappers".  Truer words.)

In a season that - if you rattle off some of what happens sounds like a series of "very special episodes" or taking on "ripped from the headlines" issues - somehow manages to deal with topics like sexual harassment, divorce, the blowback from racial stereotyping, and the outbreak of the AIDS crisis organically and woven into the cloth of the show, even as the focus swings to different characters as those issues come to the fore.  That's not nothing.

In conversations elsewhere, I opined that - in general - I think 10 episodes seems like an ideal number of episodes for any show per season.  But GLOW manages to do the one thing you always want to do in showbiz: leave 'em wanting more.  All of the characters seem to have rich lives going on just outside the periphery of the Ruth (Alison Brie) and Debbie (Betty Gilpin) story arcs.  Some characters are deeply specific even while remaining vague (ex: Sheila the She-Wolf) and others played broad (ex: The Beatdown Biddies), and others slowly revealing themselves (Justine or Arthie).

It's a largely female cast, but certainly not exclusively.  And it's interesting to see men as supporting pieces.  Of course we do have Bash Howard, our excitable producer - who has unplumbed depths.  I don't know if this is everybody or just men or just me - but holy god is Mark Maron's portrayal as Sam Sylvia like hearing your own inner-monologue played back to you.

At any rate - if you read this far, you're likely already watching the show.  I'm curious to hear your thoughts and opinions.

I second Ryan here. GLOW has become one of my all time favorite shows. I did watch OITNB, and while this show similarly has a diverse group of well defined female characters interacting with each other, this one is not cripplingly depressing. It's a lot of fun and just a great show. So happy for the Emmy nomination!