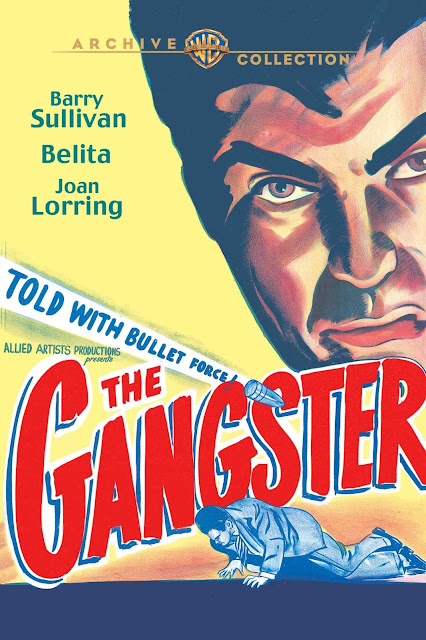 
I'm behind in my Noir Alley viewing.  That work trip put a dent in my velocity, and I didn't finish watching The Gangster (1947) - which I'd started at the beginning of the month - until the 23rd.

Muller's stories about the development of a lot of these movies are noirish tales in and of themselves.  And if you haven't had opportunity to read his book on Gun Crazy, it's a fascinating look at the twists and turns of "poverty row" filmmaking and how a prestige writer, some shady filmmakers named the King brothers, famed black-listed writer Dalton Trumbo and a whirlwind production created a singular piece of film art that was ignored at the time.*

Similarly, The Gangster felt to me in discussion as if the film is *still* getting hashed over, and I think with good reason.  Another King Bros. production - this one with a reasonable budget and big aspirations - it seems to work more like a series of vignettes in a near mythical Boardwalk strip, something that looks like artifice, near hyper reality - something set designer-turned-director Gordon Wiles has to be 100% perfectly aware, even as the producers spun it as "looks great on the cheap" and, I suspect, many a modern viewer will think is a failure. 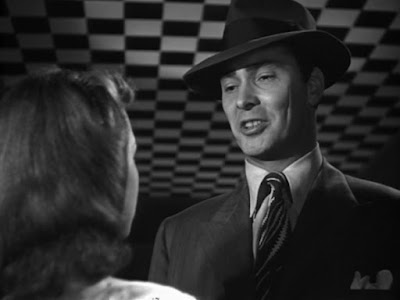 I'm gonna beg to differ.  This movie is a visual feast, and - I'll argue - is a singular vision.  Every shot in this movie seems intricately designed, each placement of each character in lighting, against geometric shapes, the fall of shadows and rain against windows a silhouette over actors.  Costumes, wall-hangings, everything has something to say.  So, if the world beyond our immediate practical set is clearly a painting and cardboard - what does it say about what's happening to our lead - the titular gangster?

Barry Sullivan is one of those faces you recognize from mid-century movies but can't always place.  Tall, brooding but with range, as "Shubunka" the racketeer Sullivan manages to capture the menace of the man as well as the hollow shell and angry, scared little boy that built up the defenses that led to his current life.  And, I'll note - screenwriter Daniel Fuchs, who adapted his own prose work for the movie, doesn't just give a few throw-away lines about being a tough kid.  There's a living, breathing social accident that made Shubunka - and at the core of the movie, that's the real story.  He wants to be a good guy, in his way, but every lesson he learned was about putting your fists up and taking what you need.

The rest of the cast is a mix of familiar faces from the era and some new mugs.  As if the script didn't give you noir bona fides, it features a young Elisha Cook Jr playing the sort of keyed up weakling on the make you've come to know and love him for.  Akim Tamiroff an ice cream parlor owner mixed up with the mob, John "that guy" Ireland a CPA who lost it all on the ponies and is freaked the hell out, Sheldon Leonard a rival gangster moving in on our heroes turf, Harry Morgan as an amorous soda jerk, a minute or so of Charles McGraw as Charles McGraw...

There's a bit of the "slice-of-life"/ Time of Your Life storytelling lifted from the stage as each character has an arc, an angle on Boardwalk-life loserdom that brings them into the swirl of action as Shubunka's world falls apart.

I haven't said anything yet about Shubunka's love interest, Nancy Starr, played her by the monomynous Belita, a former figure skater who someone decided to make into an actor.  She is, honestly, very, very pretty, but... it's sort of amazing she made it through screen tests and in front of the camera.  Everyone else is spinning this world all around her and she's delivering her lines like she's surprised she's in a movie.  Still - the vapid actress bit plays well against Shubunka's controlling paranoia, and she's given a great bit of dialog in the third reel where she lets him have it about what he did and why she's giving him the heave-ho (and worse). 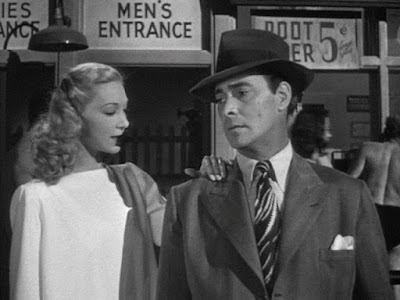 The script is dark as blackest night, and while it's got "doom" written all over it from the beginning, it isn't one of those movies where you kinda hate everyone and can't figure out why the movie-makers thought you'd care about seeing them destroyed over 90-120 minutes.  Instead, you're kinda pulling for everyone, and there's a bit of deconstruction to the gangster stereotypes of films as well as that pre-1950 theatrical exploration of character that raises its head in film from time to time.

Anyhoo... I dug the heck out of the movie and will gladly watch it again.

*I tell you kids, the Oscars are an interesting data point, but don't tell you much more than the moment in history.  You gotta see what lasted, and much of the time, it isn't what was box office gold or award bait at the time of release