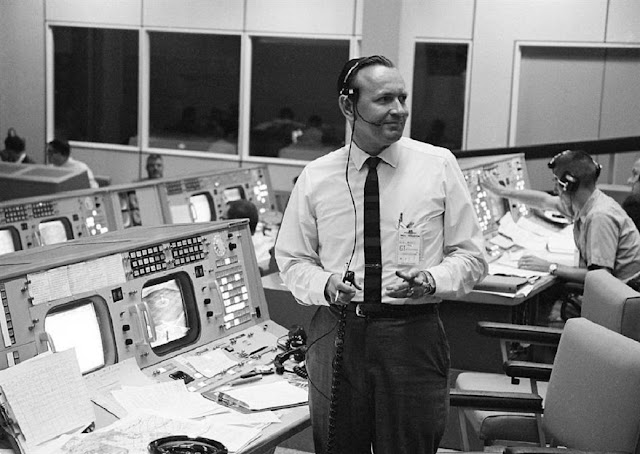 If you ever get a chance, read up on the amazing history of NASA.  It's fascinating today to see some of the unknown stories of the agency's history come to the fore in recent years, bringing to the fore luminaries like Margaret Hamilton and Katherine Johnson.  One name we did grow up with was Christopher Kraft.

Truly, no one was more "there at the beginning" than Kraft, who had been a NACA employee before the creation of NASA, and who helped build and shape NASA from the inside up.

Kraft served as Flight Director at NASA during Mercury and Gemini and as a manager of flight operations during Apollo.  Kraft's attention to detail and leadership were key to keeping all the moving parts together before, during and after each mission, keeping people alive as they hurled through space in experimental machines strapped to ballistic missiles.

He would go on to run the Manned Spacecraft Center into the early 80's, when he retired from NASA.  In the 1990's, he participated in a review of the shuttle program and published an autobiography in 2001.

Mr. Kraft passed this week at the age of 95, having pushed humanity higher, further and farther than anyone ever dreamed.  He deserves to be remembered alongside the astronauts and heroes who, themselves, went into space and those new legends of engineering, math and science.  The role he took on wasn't the one with the personal glory (although his name did become quite well known), but without the Christopher Krafts out there, you don't get the Apollo missions, either.

A statement from NASA Administrator Jim Bridenstine on Kraft's passing.